A decade ago, Columbia University professor Richard Bulliet gave a lecture on the history of the modern Middle East, in which he provocatively predicted that after a Palestinian-Israeli peace deal, the oil-rich Gulf States would become an Israeli protectorate. Iran would be left out in the cold. 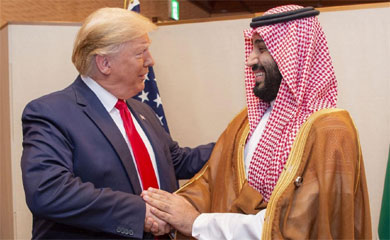 Bulliet envisioned a permanent solution to the Palestine-Israel conflict along the lines of Lebanese consociationalism, with Palestinian Arabs and Jews agreeing to divide state powers and to distribute them among various communities.

US President Donald Trump’s “deal of the century” is based on similar logic, whereby a Palestinian-Israeli deal and an alliance between Israel and Gulf states would lead to Iran’s isolation. But unlike Bulliet’s hopeful vision of power-sharing, the Trump plan offers a bleak political future for Palestinians.

The US deal requires Palestinians to relinquish all historical claims arising out of their expulsion and dispossession by Zionist forces, and to submit to an ongoing regime of apartheid in perpetuity. Trump’s proposed “state” would make a mockery of the notion of Palestinian self-determination, functioning only to absolve Israel of responsibility for the miserable conditions of this future Palestinian enclave.

Yet, despite the blatant illegality of the Trump plan under international law, the response of Arab states - and particularly Gulf states - has been muted. Why?

Firstly, the willingness of Arab states to go along with the Trump plan reflects not only their fear of Iran, but more fundamentally, their fear of their own populations. The autocratic regimes of the Arab world, in response to the Arab Spring, have resolved to maintain their power and privilege at all cost. They understand that their continued stability depends principally on external support.

An alliance with Israel would ensure their continued US support, regardless of any measures they take domestically to forestall popular reform movements, or to confront their own people. Their willingness to tolerate a plan that demands a complete Palestinian surrender reflects the extent of their desperation to secure external allies to shore up their domestic regimes.

Secondly, the autocratic nature of Arab states generally, and Gulf states in particular, is based on a social contract in which rights are traded for money. This is akin to the transactional logic that Trump and Israel are offering Palestinians: “prosperity” in exchange for relinquishing political rights. Millions of people, both Arabs and non-Arabs, have long been willing to accept this tradeoff to enjoy higher living standards in the Gulf.

Thirdly, from the perspective of autocratic Arab states, the blatant disregard of the Trump plan for Palestinian rights might be a feature, rather than a problem. Arab autocracies might realise that any insistence on the inalienability of rights could rebound negatively on their own regimes.

Autocracies can only survive in an atmosphere that lacks respect for the law. Their indifference to Palestinian rights is consistent with their indifference to allowing human rights to form the basis of their own domestic or foreign policies. The Trump plan affirms the superiority of power over law, a principle crucial to the continued survival of Arab autocracies.

Finally, these Arab autocracies also have a long-term interest in burying the issue of Palestine. The question of Palestine has been the single most effective rallying cry for inter-Arab, inter-Muslim and even international solidarity. Yet, autocracies depend on destroying independent networks of solidarity and creating isolated individuals indifferent to the fates of their fellow citizens.

The Arab Spring, despite its failures, showed the unity of Arab political culture, and the common desire among vast numbers of citizens to transform their societies along democratic lines. To prevent a recurrence of that revolutionary moment, Arab autocracies aim to remove all sources of solidarity from their societies, other than sources that the regime can securely control.

The continued popular recognition of the Palestinian cause as sacred, a political reality that encourages and reinforces transnational, rights-based networks of solidarity among Arabic-speaking populations, only serves to undermine the legitimacy of Arab autocracies. Putting an end to the Palestinian cause thus reduces the moral resources available for democratic resistance to autocracy in the Arab world.

Tragically, the Arab world - and particularly the Gulf States - could credibly resist both Iranian imperialism and Zionist aggression if these regimes were willing to abandon autocracy and to empower their own people. Sadly, they have chosen autocracy over democratisation.

Their willingness to accept the Trump plan is not only a harbinger of further suffering for Palestinians, but also a clear signal to the peoples of the Arab world that their rulers are willing to go to extreme lengths to preserve their power and privilege.

Original Headline: Why have Arab rulers accepted the Trump deal?