During a news conference in Mulhouse, eastern France, last month, President Emmanuel Macron announced a four-pronged action plan to combat “Islamist separatism”, which he defined as a political project to “separate from the Republic”. 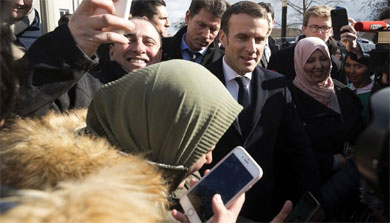 The government’s four lines of action include:

to combat foreign influences, particularly in schools and places of worship

to combat all forms of “Islamist separatism”, and the “communitarianism”, or social and cultural isolation, it is said to generate to recover the Republic’s lost territories, areas “where it has failed or given up”, especially in terms of social, economic and educational deficits.

Measures announced to achieve this include:

Phasing out the Teaching Language and Culture of Origin programme, optional language and culture courses for students that are often taught by foreign teachers appointed and remunerated by their country of origin - although how this relates to Islam is unclear, save for France’s fraught relations with Turkey, one of the countries affected

Closer monitoring of places of worship, namely to determine the origins,

Beneficiaries and objectives of funding countering “consular” Islam, ie, Islam driven by foreign countries acting through their embassies and consulates.

The news conference started off well for the French president, who recalled the principles of laicite, France’s idiosyncratic form of secularism guaranteeing freedom of religion (subject to the limitations necessary for the protection of public order), the separation of church and state, and religious neutrality with regards to public service but not “private life”. Macron said that laicite was not an instrument for fighting any one religion.

The Importance of Time and Place

The where and when of the press conference should be examined. Mulhouse, in the northeastern region of Alsace-Moselle, is an incongruous choice to say the least. The 1905 law on the separation of church and state is not in effect in Alsace-Moselle, whose residents are still governed by the Concordat of 1801, under which Napoleon restored the status of the Catholic Church in France after the 1789 revolution.

In addition to the problematic substance of the speech, the timing of the press conference is concerning. Macron’s “Islamist” campaign conveniently comes on the eve of municipal elections and against a backdrop of his hotly disputed pension reform project.

A mere few months earlier, the president had urged French citizens to be alert to “minor incidents at school and work, at places of worship, close to home, to altered behaviour patterns and divergences, to those little occurrences that deviate from the laws and values of the republic”.

The interior minister followed suit, stipulating that these could include wearing a beard (does that apply to his own?) and performing “regular or conspicuous ritual prayers”.

This speech came hot on the heels of revelations in the media that a bill to “amend and modernise” the 1905 law on the separation of church and state was being finalised, including sections indicative of the government’s determination to place the Muslim faith under state supervision.

It is therefore impossible to separate the 18 February news conference from the events leading up to it.

The French president claims to be against all forms of stigmatisation and exclusion, just as he advocates a laicite respectful of religious beliefs and rejecting discrimination of any kind. The announced measures were not directed against Islam and its followers, he insisted. The plan was a step forward.

The gap, however, between his narrative and the actions and failures of his government is huge.

If the principles of laicite guarantee all individuals the right to freedom of religion, so long as public order is not disrupted, and if its requirements do not apply to private citizens but only to civil servants, who are expected to stay neutral with respect to religion, then why haven’t laws such as the 2004 ban prohibiting students from wearing conspicuous religious symbols (read: Islamic headscarves) been repealed?

Moreover, if we all have the same fundamental right to freedom of religion, then why aren’t government-appointed officials condemned for making statements in clear violation of that right?

For instance, the day after the press conference in Mulhouse, the education minister was asked about the number of neighbourhoods where Islamic law has replaced Republican law. “It shows,” he answered - case closed. Does this mean the outward appearance of individuals practising their religion can be equated with the rejection of Republican norms?

And what about the statements made on a near-daily basis by MPs and senators, who unabashedly harbour aversion to certain groups?

The French president recently announced his determination to organise the Muslim faith. His narrative appeared to be more in keeping with the principles of secularism, since he observed that it was not up to the government to determine how religions and cultural aspects of religious life should be organised.

But he also said the government had asked the French Council of the Muslim Faith (CFCM) to put in concrete proposals for the training of imams in France, raising further concerns.

Firstly, the CFCM was instituted by the government in 2003. As a government body, it is a prime example of the flouting of laicite, regarding the non-involvement of government in religious affairs - in this case, the affairs of Islam. Its legitimacy, therefore, is highly questionable.

Secondly, to say the government is not responsible for determining matters of faith while, at the same time, imposing specifications on religious institutions and a deadline for their implementation, is tantamount to indirect government interference.

A number of independent initiatives within Muslim civil society exist, such as the Union of Imams, but these do not seem to interest public authorities.

Underpinning the debate surrounding notions of laicite, unity, social and cultural isolation and - the latest on the list - separatism, is the deliberate or unintentional conflation of “individual choices” and “national values”.

The republic is founded on equality, non-discrimination, freedom and justice. Constant vigilance is needed to preserve these values from individuals and groups seeking to undermine them. But these shared values are only meaningful if they allow each of us to make individual, but inherently different, choices that respect public order and of the rights of others.

Yet, there’s been a growing tendency in France over the past two decades to deny groups the right to make specific choices, even when they do not jeopardise either public order or the rights of others. The repressive measures against wearing conspicuous religious symbols, to give just one example, are consistent with this trend.

The truth is, the laws of the republic that we so vehemently defend - and that supposedly grant equality to all citizens - are being wielded to force people of different religious origins and backgrounds to “live like us”, “eat like us”, “drink like us” and “behave like us”.

This assimilationist narrative is no longer the prerogative of the traditional far right. It has widely infiltrated all of the so-called “democratic” parties. It is normalised and advanced by players across the political spectrum, from the far-left to the far-right.

We need to act now, to counter its insidious spread - the real hurdle to true republican unity. If not, the very evil we are trying to keep at bay may take root permanently.

Mehmet Saygin holds a master's degree in law and a master's degree in political science from the Free University of Brussels. He specializes in public law, social law, labor law and religious freedom. He is the author of La Laïcité dans l'ordre constitutionnel belge (2015).

Original Headline: France's war on 'Islamist separatism': Forcing Muslims to 'live like us'