Sharia-Controlled Zones in the West – A Myth or a Reality?

The concept of “no-go-zones” has been a hot topic in media discourse in recent years. Sensational claims have been made about the existence of exclusively Muslim neighbourhoods where non-Muslims are not allowed to enter. For instance, in 2015, to emphasize the gravity of the situation, Fox News guest and “terrorism expert” Steve Emerson stated that the city of Birmingham in the UK is totally Muslim. The city is in fact only 22% Muslim. The statement led David Cameron to brand Emerson a complete idiot. 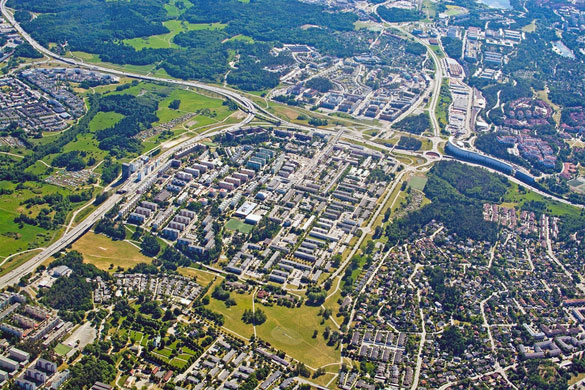 In the following weeks, the “no-go-zones” term was extensively ridiculed in Europe. Many, from scholars to people who live in the zones, disputed the description. In fact, it proved to be good material for comedians in France and elsewhere. A French show even sent its French non-Muslim correspondents to these “dangerous” neighbourhoods, only to come back with empty hands and a good laugh. Fox later apologized for their guest’s remarks by clearly stating:

“To be clear, there is no formal designation of these zones in either country and no credible information to support the assertion there are specific areas in these countries that exclude individuals based solely on their religion.”

Later in 2015, Louisiana Governor Bobby Jindal criticized the alleged insistence of immigrants on not assimilating and not adopting the host country’s values. Despite his inability to give even one example of such zones in America, Jindal stated that he had ”heard from folks” that “there are neighbourhoods in America where women don’t feel comfortable going in without veils”. Mixed reactions to Jindal’s statements followed on social media. One commentator pointed to the treatment of blacks in the U.S.:

So, are no-go-zones actually a reality that is well-documented? Or a fantasy used to demonize the poor and less fortunate members of society?

The term as it is widely employed in the media today was, to my knowledge, first used by Daniel Pipes back in 2006. Daniel Pipes is the founder of the Middle East Forum and a well-known proponent of anti-Islamic views and policies. According to Fox News, no-go-zones are Muslim-dominated neighbourhoods that are largely off limits to non-Muslims due to lawlessness, insecurity and sharia law. Authorities are often unable or unwilling to meet even basic public needs for fear of being attacked by Muslims.

The reality is that these zones are the same poor and underprivileged ghettos that have been neglected by the authorities for decades. In France, they are called “Zones Urbaines Sensibles” (ZUS), or Sensitive Urban Zones. Their size, crime rates, and security levels vary widely. According to reports, there is hardly a town in France that does not have at least one ZUS.

ZUS began to form after World War II, when massive waves of immigrants came to Europe as unskilled workers and settled in the “Banlieues de la République” (Suburbs of the Republic), or the ghettos, as some like to call them. These ghettos are a reality that no one can or should deny. Today, more than five million people live in these areas. Area locations include the heavily Muslim parts of Paris, Marseilles, Strasbourg, Lille and Amiens. The French government maintains a list of more than 700 of these areas and it refers to them as ethnic and sensitive because of poverty, crime, and the dangers associated with them.

A report entitled “No-Go Zones in the French Republic” claimed dozens of these neighbourhoods are places where the police cannot fully enforce the country’s laws or even enter without risking confrontation or fatal shootings.

Furthermore, Sweden has singled out 61 vulnerable areas known for high rates of crime, unemployment, and immigrant histories. Other European countries have also done the same.

There have been policy reactions. For example, in July Denmark passed a law that will target 25 Muslim neighbourhoods. The law states that preschool “ghetto children” will have to spend at least 25 hours per week learning Danish language, values and culture, including the traditions of Christmas and Easter. Parents who refuse to obey the law will lose their welfare benefits. These “ghetto” children are amongst the 10% of Danish kids who enter elementary school without having attended daycare.

While I think it’s good for children to learn the skills required to succeed in their societies, the problem with such a law is that it targets underprivileged citizens who are on benefits. Other citizens are not obliged to abide by it and can wait until their children are six before sending them to school. The categorization was based on income, crime, employment status, education, and “non-Western background”.

But other factors go beyond this categorization policy. No-go-zones are always the poorest places in their countries. These are the inner-city housing blocks that have been neglected by the authorities for decades, where crime, gangs and, later, radicalization flourished.

I am not denying the day-to-day hostility and resentment towards women and Jews in many European neighbourhoods. Of course, there are neighborhoods throughout Europe and North America where the authorities are not visible or they operate without uniforms because it is too risky to walk these streets as a police officer.

However, it is not possible to definitively prove that a neighbourhood is a no-go-zone. What we have is ethnic, sensitive, and sometimes dangerous areas that most of us are afraid to visit. These are ghettos with poor, underprivileged, and stigmatized citizens; the last thing they need is more stigmatization from the media and policymakers. There are social, cultural, and ethnic apartheids everywhere. The truth is that these places are not no-go-zones in the sense that you literally cannot go, but there are dangers that you might face because of crime and insecurity. Furthermore, these neighborhoods are not identical. Some of them are “must-leave” zones, “do-not-go-to” zones, or “at-your-own-risk” zones.

The solution for those who live in social misery is reducing social and economic inequalities and promoting economic assimilation. It is difficult to have a stable country without correcting such historic injustices.

In fact, since World War II, many of these communities were placed in these ghettos by their governments. They are a by-product of decades of formal policies that pushed them into poor suburbs. Now these ghettos incite hatred, hostility and bitterness from both the ghetto population and the majority. The first feel stigmatized and left behind because of a lack of jobs and opportunity. The latter feel threatened.

When laymen hear such concepts, what may come to mind is little sub-states within a country and Islamists stepping up the creation of areas that are off limits to non-Muslims. But the claim that these neighbourhoods are microstates governed by sharia law is just lame. Yes, there is concern about Muslims in the West rejecting Western values and, instead, immersing themselves in radical versions of Islam. This might also give the impression that Islamic laws are being applied instead of the laws of the land, but this is not the case.

Problems with minorities and newcomers are not unusual in countries with immigrant histories. For decades, integrating newcomers has posed many challenges to Western models of life. Every immigrant community (for example Catholics, Irish, Jews) to the West was harassed before it was accepted in mainstream society. As for Muslims, many scholars believe that what we see today is only a temporary passage to social cohesion and they too will, sooner or later, become a part of the mainstream. In fact, many of the fears expressed today regarding the integration of Muslims in the West are identical to the fears of a century ago about the integration of Catholics, who were seen as undemocratic and unpatriotic because of their perceived refusal to integrate and their allegiance to the Pope. But all that changed as Catholics paved the way to acceptance and full citizenship.

Original Headline: Muslim No-Go-Zones in the West – A Myth or a Reality?