An American in Ajmer: Khwaja Gharib Nawaz Calls Everyone, Regardless Of Their Religious Affiliation, To Penance and Purity of Heart, With Love towards All and Malice towards None 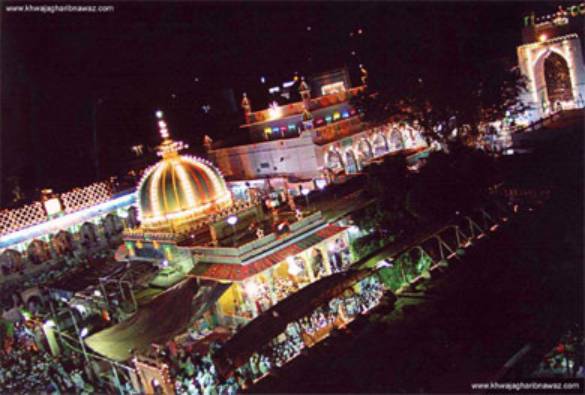 Why would an American Franciscan friar travel not once, but twice to Ajmer, a six-hour journey by train from Delhi? There is certainly much of historical interest to me as a scholar of the Mughal period. Although devotion to Mu’inuddin’s shrine dates back to the fourteenth century, it was the Mughal emperors Akbar, Jahangir, and Shah Jahan who expressed particular interest in Ajmer and the Chishti Sufism espoused by Mu’inuddin, as did Shah Jahan’s daughter Jahanara. Akbar made the pilgrimage to Ajmer fourteen times during his reign. Jahangir installed two enormous cauldrons at the shrine from which five thousand needy people were fed and which remain in use. Shah Jahan ordered a mosque to be built on the site, a simple but elegant structure entirely of white marble at the same time the ethereal Taj Mahal was rising in Agra; and his daughter Jahanara added a white marble porch (Begami dalaan) to the eastern entrance of the mausoleum. Royal visits to the dargah were always accompanied by the distribution of alms and food to the needy, thus heeding the words of Mu’inuddin:

Never seek any help, charity or favors from anybody but God. Never go to the courts of kings, and never refuse to bless and help the needy and the poor, the widow, and the orphan, if they come to your door. This is your mission, to serve the people.

Although the history of the dargah continues to draw me to Ajmer, there is something else that brought me there the first time and called me back a second time. You may call it faith or devotion, or perhaps a sacred longing, a desire to be close to the Khwaja himself, a beautiful reflection of holiness revered by Muslims, Hindus, Sikhs, Jains as well as by Christians. It is a place where sanctity is sought and celebrated over sectarianism, where religious distinctions and differences vanish. It is a place where the words of Jallaluddin Rumi (1207-1273) resonate:

The Chishti Sufism, brought to South Asia by Mu’inuddin in the thirteenth century, embraced the concept of wahdat al-wujud, derived from the teachings of Ibn ‘Arabi (1165-1240). Succinctly put, the term signifies that there is only one existence, one wujud that is God. Thus, although humans perceive multiplicity in the phenomenal world – in terms of people, races, classes, castes, religions, etc. – true existence belongs to God alone. Thus, every person and thing only reflects the existence of the One, so that everyone and everything is one in the One.

At the dargah, it is this oneness I seek, oneness in a world where politicians in both the East and the West are intent on dividing rather than uniting, where human life is expendable and the natural world exploitable. Here, there are familiar echoes of my own Franciscan charism, a spiritual tradition born in the thirteenth century at the same time Chishti Sufism came to India. Both Francis of Assisi (1181-1226) and Mu’inuddin were ascetics who renounced wealth and status, who wore rough, patched garments, and were particularly concerned with the plight of the poor. Moreover, both holy men transcended religious differences in their day: Francis demonstrated this in his peaceful encounter with the Egyptian Sultan al-Malik al-Kamil in 1219; and Mu’inuddin in his referring to a local Hindu as a “saintly man of God.” Yet, their respective communities – Western Christian and Eastern Muslim – seemed reluctant to embrace the tolerance that Francis and Mu’inuddin exemplified, and recast them in hagiographies as zealous evangelists of religious orthodoxy.

But it was neither as a Mughal historian nor as a Franciscan that I returned to Ajmer this year, but as a simple penitent, a creature of God aware of his own brokenness, his own sin that stands in such contrast to the holiness of Mu’inuddin. Before setting out for the dargah, I clothed myself in a white kurta payjama, and covered my head with a white taqiyah. Like the ihram of a hajji to Mecca, I wear externally the purity that I seek internally at the dargah. First, I must make my way through the maze of muddy alleys that surround the dargah, a visual reminder of my own messy meanderings in life. Suddenly I stand on the threshold of a white marble gateway, richly decorated with inlaid stone (pietra dura) such as is seen at the Taj Mahal. I’m happy to shed my sandals, to wash my bare feet in the pools of rain water that have collected on the marble pavement of the sacred precinct. I leave the grey mud of Ajmer’s alleyways behind and enter a world of vibrant color: piles of pink rose petals for scattering over Mu’inuddin’s grave, cords of red and orange worn by visitors to the shrine, and chadars – cloths to be draped over the tomb – of green, red and gold. These are the colors I bore and wore in my devotions that morning against the whiteness of my kurta and the marble of the dargah.

Led by my Chishti murshid (“guide”), I carry a round wicker tray piled with rose petals and covered with a chadar into the shrine. I cannot see anything but a mass of bodies surging forward. Covering my head with the chadar, my murshid prays over me in Urdu. I am plunged into darkness like the waters of baptism. I am enshrouded in a spiritual burial like the prostration at my solemn vows as a friar. Out of the whir of words, I hear my murshid say: baraka – “blessing.” Uncovering me, leading me back into light and life, my murshid and I together throw fistfuls of rose petals onto the grave. Tying a red and orange cord around my neck, he pushes me down into the crowd of devotees so that I might reverence the Khwaja’s tomb. I kiss the marble threshold and then touch it with my forehead repeatedly, praying tearfully over and over a phrase from Muslim prayer rising from my heart: Rabb, ighfir-li: “Lord, forgive me.”

A pilgrimage of penance. That is what a visit to the dargah signifies for me. While others may seek God’s mercy and forgiveness in Mecca, Karbala, Jerusalem, Rome, Varanasi, or in the Sacrament of Reconciliation, it is to his dargah in Ajmer that Hazrat Khwaja Mu’inuddin Chishti calls me as he has called so many over the centuries regardless of their religious affiliation, both the powerful and the powerless. He calls me to penance and purity of heart, with “love towards all and malice towards none.”

Before leaving the sacred precinct, I go to Shah Jahan’s mosque to pray and complete my pilgrimage. There, above the arches, between al-asma al-husna – the Beautiful Names of God - I find verses in Persian assuring me of God’s forgiveness, and that my journey to Ajmer has not been in vain:

When you rub your fortunate face on the floor of the mosque (in prayer), your book of deeds becomes as white as marble…To the throng of people who come to offer prayers, its gate is always open as is the gate of penitence.

Al-Hamdu li-llah. Thanks be to God.