This week, the adhan (call to prayer) can be heard throughout Germany and the Netherlands. Sometimes, it joins with the sound of church bells, an unfamiliar and evocative symphony, as religious institutions offer support not only to their constituents, but to whole, shaken societies. For the first time in history, both countries have allowed the adhan to regularly penetrate public space.  This is unquestionably a response to the COVID-19 crisis, a desperate grappling for social unity and godly protection. Calling out, with the knowledge that no one can come together, over a hundred mosques seek to soothe collective wounds. These wounds, of course, cut deeper in particular communities, as we have seen in African American communities in the United States—those already marginalized are affected at far more devastating levels than the economically and socially sheltered. 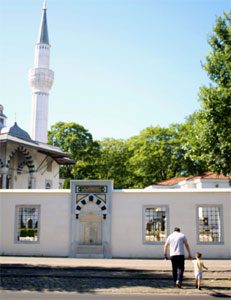 The exterior of the Sehitlik Mosque, Berlin. Photo courtesy of author.

Still, this public call to prayer is remarkable not only in sound but even more so in its social meaning. Just months ago, such a move would have appeared nearly impossible. In my forthcoming book, Mosques in the Metropolis, I critique the European project of modernity by unsettling assumptions about “progress” and “civility” through two mosque communities in London and Berlin. Exposing the deep and unrelenting inequality faced by diverse Muslim populaces, as well as their capacities to exert agency, the mosque rises as both a threshold space and an interstitial opportunity for building solidarity. Such solidarity may center on fomenting deep mutual support within, and yet extending beyond, Muslim communities into the cities and states in which they live. This includes focusing on shared concerns, from the natural environment’s decay to supporting vulnerable populaces, and building knowledge that can transcend taken-for-granted assumptions about Islam. In Berlin, such solidarity emerged at the Sehitlik Mosque under the leadership of Ender Cetin, who invited the whole city into the mosque through daily tours, and yet also encouraged mosque community members to deeply engage in the city, through participation in civic activism, educating on pluralism in schools, and running for political office.

Today, as the world comes to a grinding halt, the mosque rises as such again, offering an opportunity for deepened solidarity through a medium that can touch us even in isolation, uniting us through sound.

My book project, and my personal surprise in the public adhan, are both rooted in the reality that Europe has long resisted the inclusion of its Muslim populaces, who largely migrated as post-colonial migrants and guest workers, called to rebuild fractured European countries after World War II. It has since delimited their rights, resisting the bestowal of citizenship for decades (for instance, Germany only changed its citizenship laws from blood-based to birth-based in 2000). Even with legal equality, politicians and media outlets long continued to suggest that Muslims and/or Islam cannot fully belong to European nation-states. Over the last few years, Dutch and German politicians like German Interior Minister Horst Seehofer have continued to debate whether Islam belongs to their respective nation-state.

Muslim bodies, and institutions like mosques, have been regulated, even demonized in European public life. We have seen the Muslim body as site of conflict emerge in the so-called headscarf debates, which limit Islamic garb in public life, across countries like France, Germany, Spain, and Denmark. We have witnessed the securitization of Muslim bodies in xenophobic and violent government anti-radicalization agendas. And we have watched the form of the nation-scape shaped by fear, such as through the banning of minarets by popular referendum in Switzerland in 2006. Until recently, the far-right wing has been on the rise, building its base specifically on anti-immigrant and anti-Islam platforms. In Germany, for example, the Alternative für Deutschland (AfD) Party, capitalizing on discontent with the massive refugee migration in 2015, received enough votes to enter parliament in 2017.

In such contexts of resistance to plurality, discourses of tolerance have emerged. As Wendy Brown critiques in her book Regulating Aversion: Tolerance in the Age of Identity and Empire, “tolerance” is at once a “discourse of power and practice of governmentality” (8) achieved through a practice of toleration, a making do with that which makes the dominant group in society uncomfortable. Tolerance, often attached to rhetoric about Muslims in Europe, is a bitter civilizing discourse disguised by a saccharine rhetorical wrapper of the enlightened, liberal sensitivity—a contronym, perfectly synonymous with its own antonym: intolerance.

Instead of tolerance, late sociologist and philosopher Zygmunt Bauman argued in “Postmodernity, or Living with Ambivalence,” that we must move to solidarity; in the words of Bauman scholar Shaun Best, true solidarity emerges when “the ‘I am responsible for the Other’ and ‘I am responsible for myself’ come to mean the same thing” (317). As another Bauman scholar Keither Tester asserts, this shifts the goal away from being “with” the other to being “for” the other. Solidarity in this sense does not equalize but rather locates value in each person and each community on its own grounds. A public adhan is arguably an expression of such solidarity, rather than tolerance, as it transcends the usual attempts to reshape Islam vis-à-vis mainstream secular norms.

COVID-19 has changed everything, turning our worlds upside down. It is as if we have all tumbled down Alice’s well to Wonderland, where big is small and small is big, and nothing looms larger than our new, collective fear. This new normal has, in many ways, lifted us out of ourselves. And it holds pain and lessons for us all. In Flesh and Stone, social theorist Richard Sennett eloquently argues that solidarity can emerge through a recognition of pain—of the self and of the other—creating a civic body anew. Today, support for the AfD is suddenly waning, as many of the same refugees once demonized serve as frontline medical workers, responding to a call to save lives.

From our new vantage point, former fears seem small, our former, open lives filled with the lives of others not just big but beautiful. This evokes Freud’s conceptualization of “the narcissism of minor differences”: focusing on what we do not share in order to construct distinct, and superior, selves—occurring on the cultural, as much as individual, level. Through such “narcissism of minor differences,” Europe has long defined itself against and above its religious minorities, both Muslims and Jews. And this has, over a thousand years, eroded opportunities for deep and lasting solidarity time and again.

Has COVID-19 shaken Europe, and the so-called “Western” world writ large, awake from their dreams of superiority? Does it have the power to invoke a reckoning with the deep and lasting inequalities and violence faced by Muslim communities across the continent?

These questions remain unanswered, if not unanswerable in this still-acute moment. Yet in this crisis, we are revealed together and apart as equally fragile and equally human. And our shared humanity nests within our shared fragility. Within this metaphorical set of nesting dolls, we can see solidarity emerge: in individuals devoting their days to making medical supplies and neighborhood supports for the vulnerable. And we can hear the rumblings of solidarity in the adhan, answering the so-called “question of Islam” in Europe with a prayer, perhaps once and for all laying it to rest.

Of course, this has not erased a deep colonial and imperial history that led to the migration of Muslim populaces to Europe in the first place; nor the violence perpetrated against their bodies then, and their bodies now, in the form of formidable security states. But it does make visible, or rather audible, Islamic forms so long excluded from the public sphere. As Jeanette Jouili and Annelies Moors show in their special issue on Islamic soundscapes, Islam is deeply rooted in auditory practices and histories; public forms of “sonic” Islam contribute to what they term “a politics of listening.” The sound of the adhan permeating German and Dutch publics today shows the sociopolitical power of a soundscape transformed and through it, the nationscape is transformed as well. Here we are confronted with the opportunity of not only seeing or hearing, but really listening. 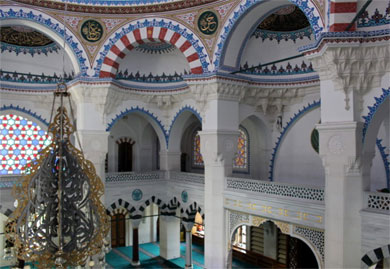 The interior of the Sehitlik Mosque, Berlin. Photo courtesy of author.

I visited the mosque that began this new tradition in 2014, located in Duisburg-Marxloh, a neo-Ottoman form facing a church, where tour guides stressed that their community belongs not only to the global Muslim ummah, but to Germany. I remember the face of an old man sitting on a stone bench outside of the mosque, hands folded on his lap, who greeted me with warmth, and an old woman who patted my hand when I first entered the mosque. The mosque community’s openness, its vulnerability, and its willingness to push back against the so-called Islam/Europe divide, moved me then. The soothing sound of its adhan moves me now.

Today, from Duisburg-Marxloh to Amsterdam, mosques are singing a prayer across Europe. In this prayer made out of song, a newfound togetherness rises, and with it an invigoration of a solidarity I never imagined possible (but who among us imagined the current state of the world to be possible?). Who knows if and whether it will deepen and last; that is a conscious choice to be made when the world moves to its familiar rhythm again. Yet this is a moment of reckoning not to be overlooked, where boundaries—so deeply etched in our geographies, and deeper in our imaginaries—can be overcome. Let us not forget this lesson when the dust settles, and we, of all religions, ethnicities, races, nationalities, mourn our dead. Let this serve as a reminder that so much more unites us than that which divides us, and that we can—and should—be for one another, when we begin again. And until then, let us find comfort in this harmony found in crisis, in a new civic body constructed from the pain, and the hope, that we share.