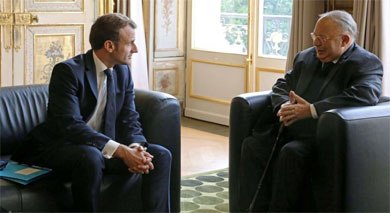 When historians assess French President Emmanuel Macron’s attempts to reform Islam in France, home to Europe’s largest Muslim population, they are unlikely to accuse him of making a rush to judgment.

Promised for the first half of 2018, the initiative has been repeatedly postponed. Reports in France suggest Macron is putting finishing touches on his proposals, having revealed parallel measures to counter “political Islam” and a perceived threat posed by Islamist radicals promoting separatism in disadvantaged areas.

For those who believe French Muslims need reassurance that there is no official desire to stigmatise or alienate them, the worry is that Macron may be tempted by political expediency to reach out to right-wing voters ahead of municipal elections in March.

Visiting the eastern city of Mulhouse on February 18, Macron said political Islam had no place in France. He duly acknowledged that any “plan against Islam” would be a serious mistake but spoke of phasing out the use of imams from abroad — notably Turkey, Algeria and Morocco, between them accounting for about 300 imams preaching in French mosques — and denying entry to the same number of foreign Quranic chanters who traditionally spend Ramadan in France.

Denouncing separatism as “our enemy,” Macron listed practices he described as at odds with French republican values. “In the republic, we cannot accept that we refuse to shake hands with a woman because she is a woman,” he said. “We cannot accept that someone refuses to be treated or educated by someone. We cannot accept de-scholarisation [the removal of Muslim children from conventional schools]. Certificates of virginity cannot be required to marry. We must never accept that the laws of religion can be superior to the laws of the republic. It’s as simple as that.”

Little of that would have sounded out of place on the lips of Macron’s principal rival, Marine Le Pen, leader of the far-right, anti-Islam National Rally. The centrist president’s strident tone reflected his wariness of Le Pen’s populist appeal.

National Rally candidates took the largest share of French votes in last year’s European elections. As a measure of Le Pen’s strength in some areas, polling indicated that David Rachline, a rising figure in the party, could win an outright first-round majority in the Riviera resort of Frejus in March.

The visit to Mulhouse was the first of a number of “field trips” in which Macron will strive to shrug off the persistent charge of distance and arrogance by showing interest in everyday preoccupations.

These excursions are expected to occur at intervals in the run-up to the elections and probably beyond, accompanied by piecemeal disclosure of his ideas for combating radicalisation.

As France awaits concrete proposals on the organisation of Islam, Macron has been saying a lot less about what may be on his mind. When first outlining his plans in February 2018, he appeared to make structural reform his priority. He wanted to “lay the groundwork” for the path of an Islam compatible with secularism, though he also promised to consult widely and avoid “cutting corners, putting everyone in the same bag.”

It is as if he wishes to be seen as the president for all seasons, clinging to the support of the liberal or left-leaning chattering classes, making the right noises for moderate Muslim ears but also seeming tough enough on Islamism to appease those conservative voters repelled by the extreme right.

An elaborate parody in the online magazine L’Opinion, running to more than 7,000 words, imagined Macron announcing such sweeping changes as abolishing the French Muslim Council, which has struggled against factional in-fighting since its establishment by Nicolas Sarkozy, then interior minister and later president, in 2003. It would be replaced by a Consistory of Islam, candidates eligible for election only if free of past or present radicalism.

Without the make-believe prior vetting, however, something similar has been seriously mooted in the protracted discussion on how — if at all — Macron should presume to shape a religion that is not his.

Even before a footnote declaring the “presidential declaration” to be a spoof, there were clues to its dubious authenticity, including plans for referendums on legislation on secularism and outlawing the Muslim Brotherhood and Salafism and mandatory community service in targeted areas for young people not in employment or education. All the same, much of the text was uncomfortably plausible.

Hazardous territory clearly lies ahead. Perhaps the best that can be hoped for is that Macron truly remains attached to a principle evoked in a recent comment attributed to an unnamed source: “The outlook is complicated but a republican dialogue with Islam in France will allow us to be stronger against Islamism.”

Colin Randall, a journalist based in London and France, worked in various roles for the Daily Telegraph from 1977-2006 and was executive editor of the National at its launch in 2008.