When a former soldier of the army of Yugoslavia threw an explosive device onto the grounds of the United States Embassy in Montenegro last month, killing himself in a secondary suicide explosion, the media’s interest in this story more or less started and ended there. 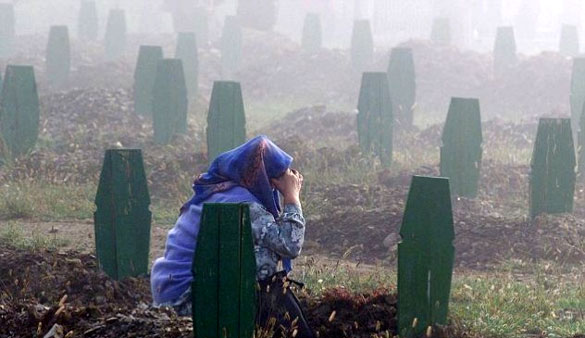 While authorities are yet to establish a motive for the attack, it turns out the attacker was awarded a medal for military service by the indicted war criminal Slobodan Milosevic, and even more significantly, the attack on the US embassy in Montenegro fits within a pattern of rising tensions in the Balkans, much of which is largely ignored in respective European and US press coverage.

“So, since Jan 1 we’ve seen a political assassination in Kosovo, a bombing attack in Montenegro and Russian-trained paramilitaries assisting the rearming of the Dodik regime in Bosnia Herzegovina. The temperature keeps rising in the Balkans but few in Brussels or Washington seem concerned,” says Jasmin Mujanovic, author of Hunger and Fury: The Crisis of Democracy in the Balkans.

Atop of all that is an ever more aggressive and imperialist Russia, asserting itself further and deeper into the region, laying the groundwork for another war in the region, one that has Bosnian Muslims fearing a return of the Serbian led genocide that killed approximately 80,000 Bosnian men, women, and children in the 1990s.

“The situation in Bosnia is very tense. We are afraid of the new war and we know very well that if the war starts, we will be the victims again — Muslims, of course. Great countries are playing again,” a Muslim citizen of Bosnia and Herzegovina, who asked to be identified only by her first name out of fear of Serbian reprisal, told me.

A fear that appears both real and justified given Russia’s hand in the rapid militarization of Serbian police forces and the presence of Russian-trained paramilitaries in the Serbian entity of Bosnian-Herzegovina — Republic Srpska. 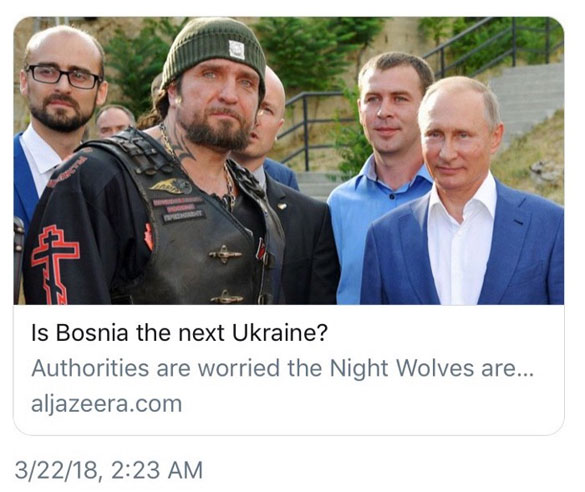 Alarmingly, it would appear both Serbia and Russia believe the “opportunity to have their revenge” is fast approaching.

Last month The Guardian reported the shipment of 2,500 automatic rifles from Serbia to the Serbian dominant entity of Bosnia. Bosnian Serbian authorities have defended the weapons procurement as a necessity to counter potential “Islamist” terrorist attacks, but European governments and human rights activists believe the Russian and Serbian backed militarization of Republika Srpska will be used to ignite a separatist conflict, putting Bosniak Muslims in the cross-hairs once again. 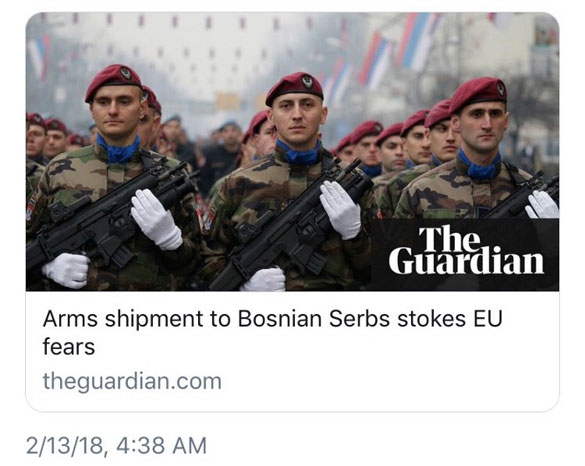 Significantly, Russian President Vladimir Putin sees Dodik as bulwark against Bosnia becoming a NATO member, and thus why unfolding events in Republika Srpska look eerily similar to the way things went down when Russia annexed Crimea in 2014. For instance, the very same Kremlin-backed paramilitary groups that were used by Putin in the conflict in the Ukraine have been deployed and are at the ready of Dodik’s command.

In fact, Putin’s paramilitary biker gang of choice, the Night Wolves, has announced it will conduct a tour of Serbia and Republika Srpska later this month, because its leaders are to receive medals from Dodik’s regime, which should ring alarm bells everywhere.

“This is part of a larger change in the international order, starting with the invasion in Georgia, Syria, Ukraine, the meddling in the US elections,” said Reuf Bajrović, Bosnia’s former energy minister, who described the appearance of Kremlin-backed paramilitaries in Republika Srpska to be a “watershed moment,” adding, “The Russians have decided to use their leverage in the Balkans to get the outcome they want: the end of the Dayton accords and the creation of a Serb state-let.”

If that’s not enough to pique the interest of a largely disinterested global audience, consider that Serbian President Aleksander Vucic declared last month that Serbia will go to war in alliance with Croats against Bosnian Muslims “should it come to that.”

Even more concerning is the fact that Serbian, and probably Russian, generated anti-Muslim propaganda has returned to levels not since the early 1990s. In January, Red Star Belgrade basketball club was fined because its fans displayed an anti-Muslim banner at one of its games in the Euroleague Basketball competition, while anti-Muslim rhetoric and hate crimes are on the rise in Serbia and Republika Srpska, alongside the destruction of mosques and Islamic community centers.

Moreover, US President Donald Trump has become widely popular among the general Serbian population as a direct result of his anti-Muslim policies. According to the European report into Islamophobia in Serbia, Karadzic also remains popular despite being convicted for his role in the genocide of Bosnian Muslims. When he was convicted for his crimes in The Hague, Serbian newspaper headlines read,” The Hague has no mercy for Serbs,” “The Hague rapes Serbs again,” “Radovan sentenced to 40 years on the 17th anniversary of the NATO aggression,” and “Karadzic’s verdict is a revenge of the West.”

The reverence of those who exterminate Bosnian Muslims en masse goes hand-in-hand with an almost collective national amnesia of the genocide that took place in Bosnia Herzegovina a mere two decades ago. In fact, Bosnian Serb nationalists insist that claims of genocide are the product of a Western-backed plot, including even the undeniable massacre at Srebrenica, which took the lives of more than 8,000 Muslim boys and men. In fact, Dodik banned any teaching about the siege of Sarajevo and the slaughter in Srebrenica within schools in Republika Srpska. 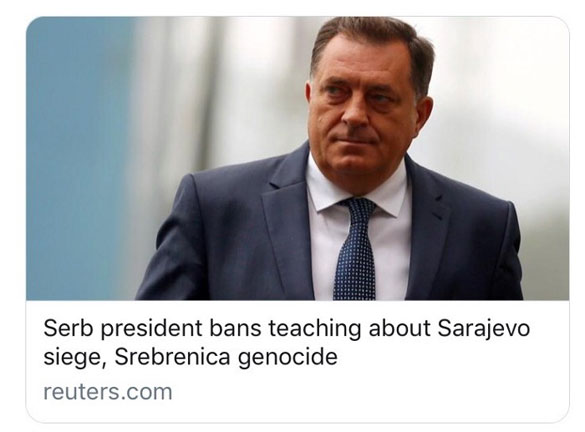 Clearly, it’ll only take a spark to ignite the next round of suffering for the Bosnian Muslim people. Unfortunately for them, however, an expansive and imperialist Russia holds the matches, and if violence does break out, will anyone beyond the borders of what was once Yugoslavia care?

A fair question given the international community has failed to prevent genocide in Syria, Myanmar, Darfur and elsewhere since the last one took place in Bosnia

Original Headline: The Next Bosnian Muslim Genocide No One is Talking About