It was another long drive, another night away from home and another morning thinking nervously about what they would say, hoping this time they would be taken seriously. Then, in the back room of an Auckland mosque, Anjum Rahman and Aliya Danzeisen sat down in front of TV cameras to explain how they had tried to prevent a terrorist attack. 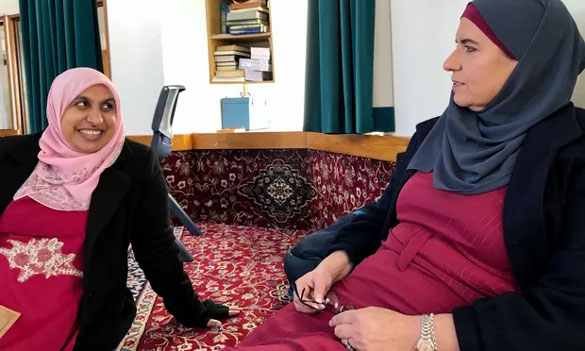 Anjum Rahman, left, and Aliya Danzeisen felt New Zealand’s royal commission into the Christchurch attacks was their only chance to hold authorities to account.

The women – an accountant and a high school teacher – knew that by giving a news conference they were “opening ourselves up to another round of hate”, Danzeisen tells the Guardian afterwards, sitting cross-legged next to Rahman on the floor of the mosque. She adds that many New Zealanders would not understand how much aggression the friends receive when they speak publicly about anything.

“I had to take a breath this weekend when I was preparing and I was like, ‘Yeah, here we go again,’” says Danzeisen.

The next day, Rahman posts a screenshot on Twitter of an upsetting Facebook message she received after the women spoke to reporters. “If anyone thinks we are doing this for attention, let me disabuse you of that notion,” she writes.

Along with their news conference on Tuesday, the Islamic Women’s Council of New Zealand (IWCNZ) released the submissions they made to a closed-door inquiry into the 2019 Christchurch terrorist attack, which is due to deliver its findings at the end of July. The chief claim by Danzeisen and Rahman – and their friend Maysoon Salama, another of the group’s leaders, whose son was killed in the mass shooting – was that the attacks in which 51 were murdered might have been prevented, stalled or mitigated.

Successive governments, state agencies and law enforcement had ignored years of warnings from Rahman, Danzeisen and Salama, among others, that Muslims were not safe, the women say.

The pair trust the commissioners, they say, but decided to make public their submissions and recommendations just in case they are not addressed in the findings released by the government. 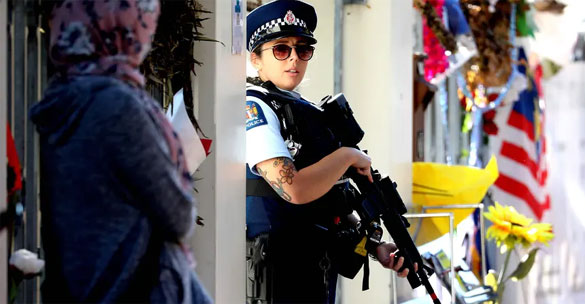 They felt compelled to take part. The terrorist who committed the attacks on two mosques pleaded guilty to all charges so there will be no trial, and the commission could be their only chance to hold the authorities to account.

“I’ve calculated just the amount of days and hours that I worked on the royal commission and it was over 40 full days on top of working a full-time job and having a family,” says Danzeisen.

The women’s evidence spanned increasingly urgent meetings the women held to discuss the threat of far-right terrorism under “the past government and the current government, and there were failings under both”, Danzeisen, 52, told the news conference on Tuesday. Originally from the United States, she has a commanding voice and a way of sweeping the whole room with her eyes – perhaps a manner borrowed from her job as a high school Spanish and social studies teacher.

Only at the end of her remarks on Tuesday did her voice crack a little.

Muslim advocacy groups such as the IWCNZ are small and run by volunteers. Its leaders have paid their own way for years to attend meetings with politicians and officials. But when reporters are chasing comment about something related to Islam, it is often Rahman and Danzeisen they call.

Rahman, 53, is a gently spoken accountant who lives in Hamilton, is raising two daughters, and arrived in New Zealand from Canada aged five. After the shootings she accidentally found herself a global media spokesperson.

Rahman is no stranger to reporters, holding community leadership roles for years and standing as a Labour party candidate. She has since been recognised in the Queen’s Birthday Honours and was shortlisted for the 2019 New Zealander of the Year.

But coping with her grief while trying to help ensure accountability has taken a toll.

“The number of times that we had that feeling in the pit of your stomach when you’re just feeling awful … the tears, the sleepless nights, frustration after the March attacks, counselling, just falling off the rails,” she says. “Not being able to eat properly, not sleeping, just not having time because we are managing all these different media, government, and community things.”

“It’s been sustained for six years,” says Danzeisen. “I ask myself, what does this stress level do to my health? It’s got to have an impact.”

They return to their chief joy of volunteering with young Muslim women when they can; taking them for outings and camps. But the pair worry about who will next hold their leadership roles; they say immigration rules have skewed the country’s Muslim demographics, with nearly two-thirds aged under 35, and 6.5% over 60. “That’s another cost,” says Danzeisen. “We haven’t been able to develop the next level of leaders because we’re too busy with government.” 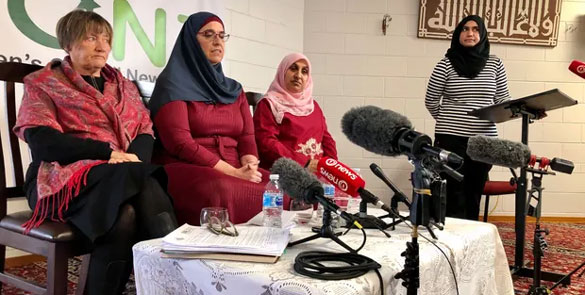 L-R Frances Joychild, the women’s lawyer; Aliya Danzeisen and Anjum Rahman speak at a news conference in Auckland on Tuesday in which they detail a threat made on the day of the Christchurch attack. Photograph: Charlotte Graham-McLay/The Guardian

There have been bright spots; the mood when Danzeisen enters a supermarket is “warm” now, she says; people no longer avert their gaze, and Muslim women have seen much more support from the public.

However, Rahman adds there is still “a high level of hostility” out there. “There is a certain section of New Zealand society that was emboldened by this attack.”

She rushes away to conduct a live radio interview in the mosque’s stairwell.

Danzeisen says: “We are sisters, Islamically. But we kind of act like sisters in a family. That’s because we’ve been in the trenches together.”

Original Headline: 'We've been in the trenches': the women holding power to account over Christchurch