The COVID-19 pandemic has led many communities in the US, especially those on the margins who are particularly vulnerable to the consequences of national politics and bear the brunt of structural state violence, to rethink political engagement. Muslim Americans, who have been politically energised in new ways since 2016, are among these communities. 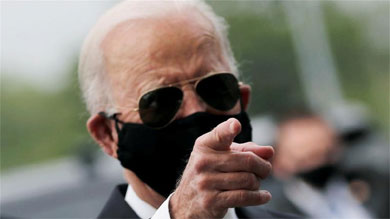 Democratic US presidential candidate and former Vice President Joe Biden is seen wearing a face mask amid the COVID-19 pandemic, in New Castle, Delaware, US on May 25, 2020 [Carlos Barria/Reuters]

Last month, one prominent Muslim group, Emgage PAC - which calls itself the largest Muslim American federal political action committee - endorsed Joe Biden for president. "As president, I will stand up for Muslim communities across the country, immediately repeal Donald Trump's Muslim ban and embrace diversity as a core strength of our nation, not demonise it," Biden proclaimed shortly after being endorsed.

These words may seem comforting but they fall terribly short. The Muslim American community should take Biden's promises with a pinch of salt and scrutinise his political record on issues that have disproportionately negative effects on its members.

One of these issues is the "state of exception," ie, when a state exercises its sovereign powers under an emergency situation to implement policies (ostensibly for the public good) that it otherwise would not under normal circumstances. Amid the COVID-19 pandemic, these policies could include the use of data collection and face surveillance to curb the spread of the virus, raising questions about civil liberties and privacy rights.

Muslims are familiar with these questions, as they have long been targeted by the state of exception and know better than anyone else that curtailing rights in the name of security often means compromising both. For Muslims, surveillance under a state of exception has been the norm and Biden's record on it ought to be interrogated, as we discuss political accountability amid the COVID-19 pandemic.

It was Michael Bloomberg's unsuccessful presidential campaign which momentarily brought the issue of discriminatory surveillance to the national spotlight. Indeed, if there were a silver lining to Bloomberg's campaign at all, it was that it caused the racist policies he implemented as the mayor of New York - from  "Stop and Frisk" to surveillance of Muslim communities - to be questioned like never before. It may be presumed that such policies began and ended with Bloomberg, but the truth is, they were only one part of a larger structure that has long targeted Black and Brown communities throughout American history.

This issue is personal to me. As a teen, I was targeted by Mayor Bloomberg's surveillance when my non-profit charity was infiltrated by an informant who eventually confessed on Facebook to having worked for the New York Police Department (NYPD).

The news rattled me and put my community perpetually on edge. Imagine entering a sacred space having to worry that the person praying next to you might be a law enforcement agent aiming to entrap you. To fight this, I joined a class-action lawsuit with fellow community members in 2013 to challenge the NYPD's discriminatory surveillance.

It took years, but we reached a settlement with major policy changes, such as a prohibition on investigations in which race, religion or ethnicity is a substantial or motivating factor; a limit on the use of undercover informants; an end to open-ended investigations; a civilian representative to monitor all investigations to ensure the NYPD complies with these new safeguards; and more.

Few people know that the NYPD's surveillance of Muslims drew explicitly from the same model used by the Central Intelligence Agency (CIA) in the global "War on Terror" and that it also has stark parallels with the "War on Crime" that has targeted Black and Latino people for decades. The most glaring example of how this surveillance apparatus has manifested in national policy is the Countering Violent Extremism (CVE) programme, pioneered by none other than the administration of former President Barack Obama and the presumptive Democratic nominee, former Vice President Joe Biden.

Obama unveiled this programme in 2011 with the stated aim to "address the conditions and reduce the factors that most likely contribute to recruitment and radicalisation by violent extremists". To do so, the programme encouraged federal agencies like the Department of Homeland Security to partner with social workers, mental health counsellors and teachers from within the Muslim community by tasking them to identify traits in their clients that could serve as predictors of extremist violence.

For example, in a 2014 document called Countering Violent Extremism: A Guide for Practitioners and Analysts published by the National Counterterrorism Center, social service providers were asked to rank their clients on a scale of 1 to 5 in categories such as "Experiences of Trauma", "Access to Healthcare", and "Experiences of Loss (Loss of Home, Role, Status, Loved Ones, Beliefs)", all of which were supposedly indicators of extremist violence.

Aside from the fact that these categories are completely arbitrary and meaningless, their very implementation as markers of extremism violates both the rules of confidentiality and civil liberties. All of this took place under the Obama-Biden administration and has only been expanded under Trump's.

In fact, the Department of Homeland Security under Trump recently launched the Targeted Violence and Terrorism Prevention (TVTP) programme, for which Congress has authorised $10m in funding for the fiscal year 2021. TVTP is ultimately a rebranded version of CVE, and while the federal government could be funding schools, hospitals and public infrastructure in the middle of a pandemic, it is instead allocating millions of taxpayer dollars to target Muslim communities.

The office that manages the TVTP programme recently released a FAQ sheet to discuss "risk factors" and "indicators" of violent extremism that include such things as "having trouble in romantic relationships," "failing to achieve one's aspirations," and "having personal and political grievances". These sound like quintessential millennial experiences to me!

Muslim, Arab, South Asian and Black community organisations have been fighting hard against harmful policies like CVE/TVTP for a long time. In cities like Boston where CVE programmes were piloted, organisations like the Muslim Justice League (MJL) have been on the front lines educating the public about the pernicious harm these programmes have caused.

In New York City, the mastermind behind Bloomberg's surveillance of Muslim communities, Mitchell Silber, authored a report in 2007 (now debunked) whose underlying logic served as a precursor to CVE-like methods of surveillance.

It was only after my lawsuit that the report was removed from the NYPD's website. Despite the strong pushback from experts and the Muslim community at large, Silber remains obstinately committed to CVE and is still at work, employed by the Jewish Federation of New York (UJA-NY) as the executive direction for their Community Security Initiative.

Some may argue that white supremacists should also be targeted by CVE/TVTP to "equalise" the playing field, but such an idea only reinforces the false logic that these programmes are premised on and serves to legitimise existing discriminatory surveillance.

Any initiative carried out by law enforcement and funded by the government that is premised on the presumptive criminality of a community - be it CVE or TVTP - is fundamentally discriminatory and should be abolished in its entirety. TVTP is rebranded CVE, and just as our communities rejected CVE, they will reject TVTP.

In fact, on June 1 over 70 Muslim and Muslim-allied human rights, civil liberties, and community organisations delivered a letter to Acting Department of Homeland Security Secretary Chad Wolf demanding that he terminate the programme.

There is no denying that Trump's policies, abetted by the Republican Party, have caused enormous harm to people of colour, the poor, undocumented people and numerous other marginalised communities of our country. However, one can argue that Trump has also granted an excuse to Democratic Party elites to cover their own harmful policies, allowing them to fall back on being anti-Trump when questioned.

"You should vote for Trump," Biden once told an undocumented immigrant activist when he was questioned about Obama's record of deportations.

Such entitled dismissiveness coming from our elected officials directed at our most vulnerable populations places us in a difficult position. We know that Republicans cannot be trusted to keep us safe, so we turn to Democrats for survival, but we are made to take a Faustian bargain that we must be quiet and accept crumbs for safety. This can no longer be the case. Joe Biden must terminate CVE/TVTP if elected.

It is my view that, ultimately, the collective liberation of marginalised communities will not come from electoral politics. A country built upon the backs of enslaved peoples and through the genocide of the Indigenous will never truly save us.

For many of us, electoral politics is a matter of choosing the most ideal conditions under which to organise. One of the paradoxes of liberal democracy is that it is often its most marginalised subjects that push it to live up to its own promises. That is what we are here to do.

We do not know what the state of exception will entail as the crisis of COVID-19 still unfolds before us, but we know it will draw from models that have long targeted Black and Brown communities for decades. Regardless of who wins the 2020 election, recognising the structural nature of anti-Black and anti-Muslim surveillance and the role of elected officials in perpetuating these policies will better prepare us to resist them when the time comes.

The views expressed in this article are the author's own and do not necessarily reflect New Age Islam's editorial stance.