Will US Vote in November Chart A New Course in The Middle East?

When Americans elect a president, they choose a commander in chief. For that reason, as they consider who should lead the nation, issues of war and peace are often front and centre. Not this time. 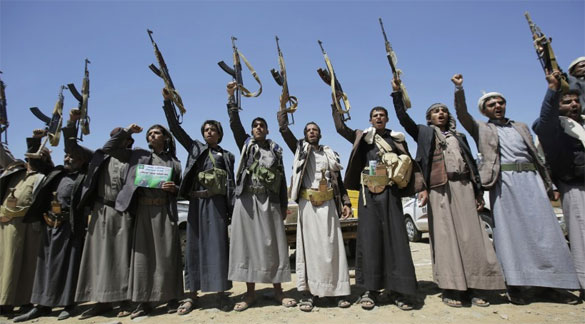 Shiite Houthi tribesmen in Sana, Yemen, in 2019. The U.S. policy of backing Saudi Arabia against Iran in the region has underwritten violence and put innocents in the crossfire. (Hani Mohammed / Associated Press)

As the 2020 election approaches, domestic concerns the COVID-19 pandemic, acute economic distress and demands for reckoning with pervasive racism are crowding out questions related to the nation’s global role.

But to ignore what is happening beyond our borders is to overlook this important truth: Since the end of the Cold War, now three decades ago, the United States has lost its way in the world. Under President Trump, things have only gotten worse.

Today, foreign policy defined as a principled and consistent pattern of behaviour has ceased to exist. All that remain are noise and gestures, baffling our traditional allies and delighting those eager to take advantage of the bedlam that currently prevails in Washington.

The essential problem is twofold: Those responsible for charting post-Cold War US policy have misconstrued core US interests. And they have vastly overestimated and therefore recklessly misused American military power.

In no part of the world is this dual failure more in evidence than in the Middle East. The proof? The trillions expended since 9/11 with next to nothing to show in return.

With the possible exception of Vietnam, no foreign policy initiative in all of US history can match the global war on terrorism for producing results so radically at odds with declared intentions.

So, there is a pressing need to reassess US policy toward the Middle East. Waiting for a more convenient occasion is not an option.

Any such reassessment will necessarily begin with a realistic appraisal of US interests. Realism does not mean walking away from the region. It does mean approaching the Mideast in different ways.

A primary goal of US policy should be to restore stability to a region. Stable in this context is synonymous with mutual coexistence.

“Peace” in the Middle East won’t look like peace in Europe. But simply encouraging a cessation of war and promoting greater economic integration constitutes a worthy goal.

To promote stability, the United States should reposition itself as an honest broker, committed to solving problems through diplomacy and dialogue. That implies a willingness to talk to all parties. The Black Lives Matter movement serves as a sharp reminder that we have our work cut out for us here at home.

As for governments abroad that abuse human rights, the United States should hold all offenders equally accountable. A new paradigm for US policy in the Middle East ought to revisit the terms of the US-Israeli special relationship.

Israel in 2020 is not the young and vulnerable nation with which the United States forged a special relationship decades ago. It is today vastly stronger and its enemies fewer and weaker. The only nation in the Middle East possessing a nuclear strike capability, Israel also has the region’s most effective military forces.

It is fully capable of defending itself by itself, without a $3.5-billion annual subsidy courtesy of the American taxpayer.

Disregarding US objections, successive Israeli governments have pursued a policy of creating illegal colonies on the West Bank. In doing so, they have effectively eliminated the possibility of creating a viable Palestinian state. The United States should not ratify or endorse that result.

In sum: No pariahs, no free passes, no special privileges.

And no magical solutions. There are none. But there is no ignoring this reality: The existing architecture of US foreign policy is nearing collapse, and nowhere more than in the Middle East.

Acting now to devise a replacement is imperative. The election of 2020 provides the right occasion to do just that.

Andrew Bacevich, a contributing writer, is president of the Quincy Institute for Responsible Statecraft

Original Headline: Vote in November to help the U.S. find its way in the world again