City of 333 Sufi Saints: Timbuktu - Jewel of the Desert

The fabled city of Timbuktu in the present-day Republic of Mali in West Africa has been a lot in the news lately. In the West, its name has become synonymous with an exotic place, both distant and forsaken. But during its golden age in the 15th and 16th centuries, Timbuktu was a renowned centre of Islamic and secular learning, research and scholarship. Based on its past contributions to knowledge and human civilization, the entire city of Timbuktu has been designated a world heritage site by UNESCO. 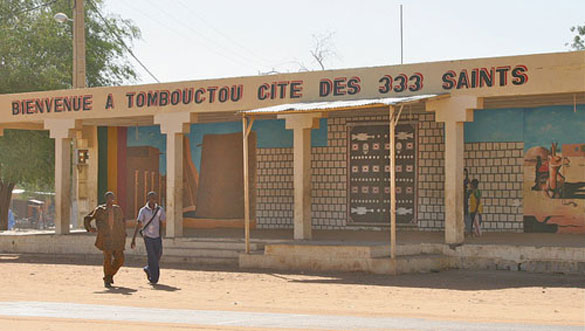 Modern Mali had been a functioning democracy until January 2012, when its legitimate government was undermined by a rebellion in the north. The rebellion was followed by a military coup. Since then, the country has seen a vicious civil war, characterized by the ascendency of some radical Islamist elements who in their espousals and destructiveness are not unlike the Taliban.

Timbuktu has long been called the city of 333 Sufi saints, as the people follow a tolerant version of Sufi theology. The recent militants tried to force their dogmatic version of the Sharia law, showing scant respect for the city's pluralistic religious traditions or its rich literary and architectural heritage.

Calling themselves "Ansar Dine" and "Al-Qaeda in the Maghreb", the insurgents destroyed the ancient Sufi shrines the people had revered for generations by branding them un-Islamic. They banned music and entertainment and instituted harsh punishments. These excesses raised worldwide concern that centuries-old Islamic manuscripts assiduously protected by local families might be destroyed. The danger receded somewhat when, in February, the militants were finally driven out by a joint French-Malian task-force. Fortunately, the earlier reports about large-scale destructions of Timbuktu's prized scholarly manuscripts proved exaggerated.

In the 13thcentury, this city located at the edge of the great Saharan desert became the crossroads of commerce: it was here that traders - Arabs and Africans - exchanged precious commodities such as salt, gold, slaves and cloth. Timbuktu was then part of the Malian Empire whose power reached its zenith between the years 1250-1450 AD. According to legend, the city's most powerful ruler, Munsa Moussa (1280-1337) embarked on the Hajj in 1324, accompanied by 60,000 men, 12,000 slaves and 200 camels, laden with large amounts of gold, clothing and food. On his way to Mecca, he distributed so much gold to the poor that the value of the precious metal went down in the markets of Cairo. The stories of wealth of the Malian Kingdom and the scholarly reputation of the city of Timbuktu had soon spread far.

Moussa was determined to promote Islamic religious scholarship and enhance the splendour of Timbuktu. He brought back with him from Hajj some Arab and Andalusian architects. They designed and built his palace as well as the Djingareyber mosque, one of the three oldest mosques in Timbuktu. Constructed mostly of mud and limestone, the great mosque today is admired for its simple majesty and is designated as a world heritage site.

Timbuktu was visited by several world travellers who have left perceptive accounts of their observations. The city had not yet reached its pinnacle when, in 1353, it was visited by the celebrated Muslim traveller Ibn Battuta. He was impressed with the solemn observance of Friday prayers and joyous celebration of the two Eids. In his travelogue, Rihla, however, he expressed no great admiration for the city or its scholarly institutions. Later, the Andalusian Muslim traveller, Hasan al-Wazzan, known in the west as Leo Africanus, who visited the city in the early 16th century, was overwhelmed by the prosperity and gentle dispositions of the people. He noted with approbation that they much cherished instrumental music and dancing. He also recorded the presence of a large number of scholars, preachers, Sufis and judges who enjoyed a highly honoured status.

Attracted by Timbuktu's reputation as a place of learning, many religious scholars and mystics made it their home. At the University of Sankore, one of the three centres of learning, scholars taught subjects as diverse as religion, law, physics, mathematics and astronomy and authored erudite texts, many of which still exist. There was the popular saying, as cited by Steven Kemper in his book 'A Labyrinth of Kingdoms': "Salt comes from the North, gold from the South, silver from the country of white man but the word of God and the treasures of wisdom are only to be found in Timbuktu."

[box7]After the death of Munsa Moussa, the fortunes of Mali and Timbuktu waned temporarily, but were revived under the reign of King Askia Mohammed (1493-1528). A wise and astute king, he established public libraries and encouraged the growth and expansion of education at Timbuktu, ushering in a new era of scientific inquiry and intellectual creativity. The most illustrious scholar at the time was Ahmed Baba (1556-1627), an authority on Malekite jurisprudence and Islamic law, a jurist and prolific author. He is credited with authoring at least 70 books in Arabic and his personal library is reputed to have had a collection of 1600 books.

The storied period of Timbuktu's history came to an end in 1591 when it was conquered by Sultan Al Mansur of Morocco. The scholars were treated harshly and forced into exile to Marrakesh. Many perished either on the way or in captivity. After ten years, following the death of the Sultan, they were permitted to return but by that time only Ahmed Baba had survived.

As appreciation of Timbuktu's cultural and religious heritage has re-emerged in the world, attempts have been launched for their preservation. The new Institute of Higher Learning named after Ahmed Baba was opened in 2009 in Timbuktu, and later renovated at a cost of millions of dollars. It is equipped with facilities to preserve the precious manuscripts that had been in varying stages of decay. So far, it has acquired some 30,000 privately owned manuscripts; almost all are in Arabic, with many going 900 years. They are being systematically catalogued, categorized and photocopied.

It has long been an adage in the West that black Africa did not have any written record of scholarly endeavours, only oral traditions. The rediscovery of the ancient Islamic manuscripts in Timbuktu has unequivocally refuted these misperceptions. They also offer an invaluable opportunity for researchers to study them for the status of knowledge as it existed centuries ago, and the contributions made by Muslim scholars in a remote corner of Africa.