Muslims Have No Reason to Ignore Quarantining Themselves; In Fact, It Is A Religious Obligation 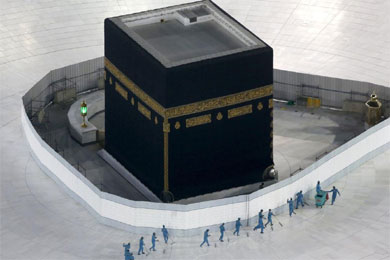 Workers disinfect the ground around the Kaaba, the cubic building at the Grand Mosque, in the Muslim holy city of Mecca, Saudi Arabia, on March 7.

Some religious institutions are continuing with their gatherings by limiting the number of worshippers. The risks are too serious given the composition of such gatherings and their proximity to each other.

Every religious institution must lead by example and suspend all such gatherings. The vast majority of mosques exercised responsibility and suspended prayers and gatherings even before public health called for this, but a few remain open.

The decision of mosques to remain open boggles the mind because they proclaim to be following prophet Muhammad (peace be upon him), who unequivocally taught the opposite.

It may be surprise to many that the Prophet preached the idea of quarantine almost 1,400 years ago when he said, “no person who is afflicted with a communicable disease should be brought near the healthy.”

He also said, “If you learn of a city with a contagious affliction, do not enter it; if you are in it, do not leave it [to prevent spreading the disease].” The Prophet also advised people to keep away from those with infectious diseases. In one incident when someone with what was considered a contagious disease stretched out his hands to give him the oath of allegiance, the Prophet did not take his hand but assured him gently, “We have already received your oath of allegiance.”

The Prophet himself set the precedent of cancelling congregational prayers during natural phenomena, such as heavy rains or flooding. Indeed, he taught, “Where there is a potential tangible harm, it ought to be removed.”

Moreover, it is an often-quoted admonishment of the Prophet that those who consume garlic should stay away from public prayer gatherings until the foul smell is gone for the fear of being offensive to others. How can those who proclaim to follow him endanger the lives of others for the sake of gaining the additional benefits of congregational prayer? The all-powerful and most merciful God is everywhere, can accept prayers wherever performed and can certainly appreciate our concern with the global COVID-19 pandemic.

Years later the Caliph Umar Ibn Khattab demonstrated these teachings. On his way to what is Syria today he heard that it was infected with cholera and decided to return to Madinah. When a companion asked, “Are you fleeing from the decree of God?”, Umar replied, “Not at all; instead, we are fleeing from one decree of God to another!”

Umar then asked, “If you were to take your herd away from a drought-stricken area to a fertile valley, aren’t you complying with the decree of Allah?” Umar reinforced the idea that accepting the will of God does not in any way contradict the human free will and freedom to work to realize beneficial goals, nor to prevent possible harm.

Islamic principles provide guidance in this unprecedented situation. The consensus of the scholars is that people who are sick or fear getting sick are excused from attending congregational prayers. Likewise, those who are detained or imprisoned (and therefore in isolation) are also in this category.

Experts over the last few weeks have been preaching that proper hygiene and washing oneself are critical in this battle against this deadly disease. For Muslims, these practices should be nothing new.

In a hadith that any Muslim child can recite from memory, the Prophet taught that “cleanliness is half of faith.” In fact, the Prophet instructed, “Wash your hands after you wake up. You do not know where your hands have moved while you slept.” He further taught that the “The blessings of food lie in washing hands before and after eating.”

A practicing Muslim is further instructed to pray five times a day. Ideally, before each of these prayers, one is directed to perform ablutions that mandate washing the hands, arms to the elbow, face, cleaning out the nostrils and even cleaning the ears.

Lastly, another teaching, which many will appreciate in this era of toilet paper shortage, the Prophet taught that after using the toilet, water must be used to thoroughly clean the private parts.

Muslims have no reason to ignore the public health directives to focus on their cleanliness and quarantining themselves. In fact, it is arguably a religious obligation.

Shaikh Ahmad Kutty is a senior resident scholar at the Islamic Institute of Toronto. Faisal Kutty is a lawyer and law professor at The Dwayne O. Andreas School of Law, Barry University.

Original Headline: Original: Practicing Islam in the time of COVID-19