The Magic of 786 Rabbit and Superstitions of Cats

(This is perhaps a futile attempt to escape the fiery reality of the world and into the superstitions of the jungle!)

There was time when learned people, religious or not would put pen to paper with786 on the top of the page to denote the abjd form of Bismillah—instead of Arabic “I begin with the name of Allah” when writing a letter!

It was so taken for granted that no question was ever asked, even the religious schools as to how it came about to be Bismillah.

Abjd is an ingenious form of alpha-numerals where in Urdu/Persian/Arabic alphabets are allocated numbers and therefore various tricks are played with numbers and letters to code and decode a written message.

Poets particularly have used it effectively to record date of birth or of Death and sometimes to give important dates of events and personalities.

The following table of abjd gives the list up to ten alpha numerals as an example:-

Hence the name of abjd derived from the first four letters.

In some Muslim countries hotel floors and rooms are marked with abjd letters instead of numerals!

Returning to the abjd of the full Bismillah: I begin in the name of God most merciful most kind, as written and read, add up to the seven hundred and eighty six-786claimed as holy. It is examined here.

The actual text as written in Arabic at the beginning of all chapters except one, where the text appears in the middle of a chapter, giving a total of 114in Quran is:

When each letter of the text as written is counted ب س م ا ل ل ہ ا ل ر ح م ن ال رح ي م  , the total number comes to 19. A number considered as holy among many abjdi or the “Nineteeners” Muslims!

To them 19 is an all pervasive miracle number in the Book.

When the full verse is further dissected into its real wording and alpha letters, to mean: With the name of Allah the most merciful most kind, it presents a different picture.

For the non-Urdu readers’, the English equivalent is given as:

bi=with, ismi=name, Al-lah=Allah, al-Rahmaan=most merciful, al-Raheem= most kind; the total of numbers to the abjd letters are 23 and add up to a sum of 788and not 786!

It is a quark of Arabic that some letters drop off when joined together. For example bi-ismi Allah becomes Bismillah. That is from eight (8) to seven (7)! Thus few letters are dropped in the total text which gets whittled down to 19 as written above the each chapter and the one in the middle of the text as stated. There are other manipulations to make the required numbers when necessary.

If at all there is supposed to be magic in playing with numbers in Quran then the above are the numbers that should be considered as holy, that is 23 and 788, but they are not considered so!

There is a long list of numbers given in Quran and repeated often, not just these, so which one is to be as the lucky holy number must be question?

For some strange reason for Muslims 786 has acquired a holy status and one finds that special effort is made to acquire them for use. For example vehicular registration number plate of 786, is bought at extra cost-- for divine protection and safety!

Yet it is not uncommon to come across these vehicles involved in even fatal crashes! So where is the holy protection gone?

The superstition of holy, evil or unlucky numbers is not only the prerogative of Muslims. In the Chinese tradition 888 is considered lucky and 4 as bad. For Japanese 9 is bad.

In Biblical terms 666 is considered evil. In many Western countries 13 is considered unlucky, to the extent that the thirteenth floor is not numbered; and so on.

A little effort with paper, pencil and calculator to add abjd numbers of family children’s names added to one child’s delight, 786 but with only eleven letters!

But when it transpired that a few unsavoury characters in the world, whose name added to the 786, the delight just… sort of faded away!

Now it has become a pastime and a game played on the computer for the young ones to add names or even make up some, to be the holy or evil number.

Mankind has come a long way out of the woods not to believe in many of the superstitions that were part of normal life in the jungles. Yet some of these superstitious beliefs die hard and are still around. Not only in the uneducated families, but also the so called educated ones.

It is common experience to see the famous last two short “Quls” chapters of the Book, written in intricate calligraphic art form, framed and hung on the wall to ward off evil and ostensibly to provide divine protection from evil eye for the family home; yet as a backup insurance, there is an electronic alarm system installed, just to play safe!

In some families to play dies with the Book and its text is considered normal and routinely employed to make decisions on important matters, such as to accept or not proposal of marriage for the darlings of the family. Faal and Istikharaa, with the help of a priest are often employed, where a chance is taken with the verses that appear on opening the Book.

In one such case—an educated family at that—the proposal after Istikharaa consultation and Khatam ul-Quran, was accepted and formalities concluded. However the engagement was broken only a few days later when unsavoury news came to light about the other party.

What happened to advice that was extracted from the Occult Istikharaa and sealed with the reading of the holy Book in one sitting and without understanding?

The Scripture has been turned into a Book of black magic, superstitions and warding of evil and not a Book of instructions and following the instructions.

The professional clergy too makes hay from the superstitions of the people or perhaps are superstitious ignorant themselves. Either way it is lament-full that such a situation should still occur centuries after the Book’s appearance, to bring humanity out of the jungle!

Poet Mehar Mahslai had written a poem named The Lament of Quran just to answer such question: Although it seems that in his time matters had not taken such a bad turn. It is given here in full:- 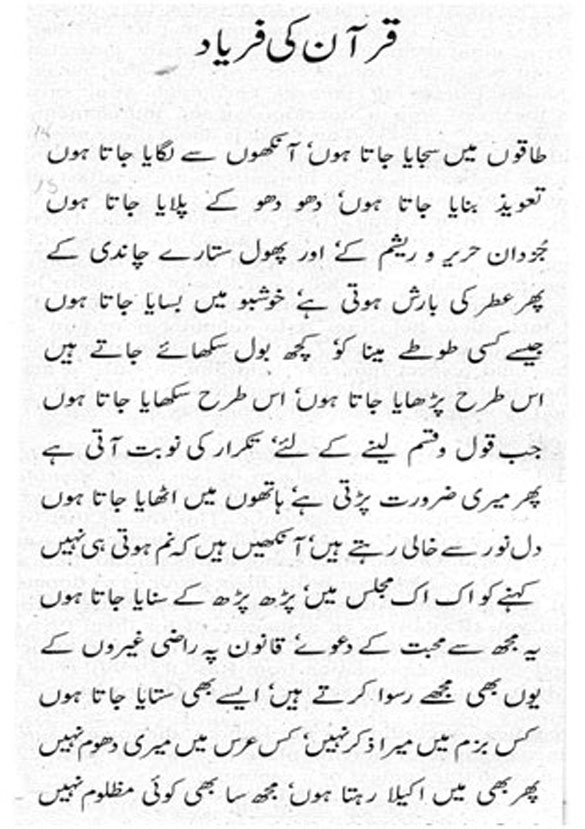 Decorated and arranged in the niches, caressed with eyes I am!

Made into talisman, washed and made to drink I am!

Book covers of brocade and silk, flowers and stars of silver,

Perfume is rained on me, in scent smothered I am!

As are Parrots and Mena taught words,

That is how taught to read I am!

When it is necessary to swear an oath,

Then I am required, raised aloft I am!

Hearts are devoid of light, eyes never get moist,

To say that in every congregation, read and repeated I am!

This is the love expressed for me,

But acceptance of rules of the others,

This is how disgraced and tormented I am!

Which gathering I am not discussed, in which procession I am not proclaimed,

Even so I am alone and so aggrieved!

When somebody dies I am read to completion,

Shedding tears on the coffin, the corps is made to listen to me!

So it seems that 786 is not so bad after all. But then is there a grading in superstitions of the jungle? Is a black cat worse than a white cat?