Planting Trees in Islam and Science: With a Special Focus on A Forgotten Tree Called ‘Bremji Kul’ in an article By Mr. Iqbal Ahmad

A Forgotten Tree Brejmi Kul and Its Spiritual Links

·         The value of tree planting has been demonstrated in both Islam and science, as mentioned by Mr. Iqbal Ahmed.

·         Bremji Kul, a magnificent ancient tree of Kashmir has been mostly associated with Sufi saints, who used to meditate under its shade.

·         Herbalists say that Bremji Kul has medical importance as well; they say that the fruit of this tree is sweet and edible, and can be eaten raw, or cooked.

·         The Prophet [peace be upon him] emphasises the value of tree planting, declaring that it is a means of obtaining the reward of charitable giving.

·         The essay of Mr. Iqbal Ahamd is unquestionably engaging and instructive for readers, and the author deserves praise for it.

It's terrible we aren't taking the necessary steps to save the world. The government has frequently warned that deforestation and the loss of greenery on the earth is one of the leading causes of pollution, but it persists. Greenery is diminishing as new cities are created. Forests are being destroyed at an alarming rate. Trees clean the air and absorb hazardous airborne particles and gaseous pollutants, and air pollution density can be reduced greatly if green trees are not cut down and new trees are planted, according to science. The value of tree planting has also been underlined in Islam, although we rarely pay heed to it. In the Prophet's hadiths, the Prophet emphasises the importance of tree planting.

In another tradition, the Prophet (peace be upon him) said: “That will be the charitable donation until the Day of Resurrection.” [Sahih Muslim, 3:1188 Hadith 1552]

The value of trees can be seen in the fact that chopping trees is prohibited in Islam even during times of war and conflict. Said b. al-Musayyab (may Allah be pleased with him) recounted to Imam Bayhaqi that Hazrat Abu Bakr Siddiq (may Allah be pleased with him) would constantly tell the Islamic army as he deployed it for Jihad, “Do not drown or burn date-palm trees. Do not cut down a fruit-bearing tree. Do not demolish a church. And do not kill any children or old people or women….” [Narrated by Al-Bayhaqi in al-Sunan Al Kubra 9:85 Hadith 17904]

Around fourteen hundred years ago, Islam emphasised the necessity and usefulness of tree planting, and the importance of tree planting was later shown by scientific experiments and observations. In other words, the value of tree planting has been demonstrated in both Islam and science, as mentioned by Mr. Iqbal Ahmed in the following article. However, the author devotes special emphasis to the historical and spiritual significance of the Bremji Kul tree, demonstrating how closely it has been linked to Sufi saints.

The author references Sufis in this article as noting that Sufis used to practise acts of prayer and meditation under trees like Bremji Kul, emphasising the significance of such trees. Although the practise of putting trees on the graves of Sufis and even in village common graveyards is centuries old, the author has underlined its significance in the special context of Kashmir. This essay is unquestionably engaging and instructive for readers, and the author deserves praise for it.

Bremji Kul: A Forgotten Tree Mostly Associated With Sufi Saints, Who Used To Meditate Under Its Shade 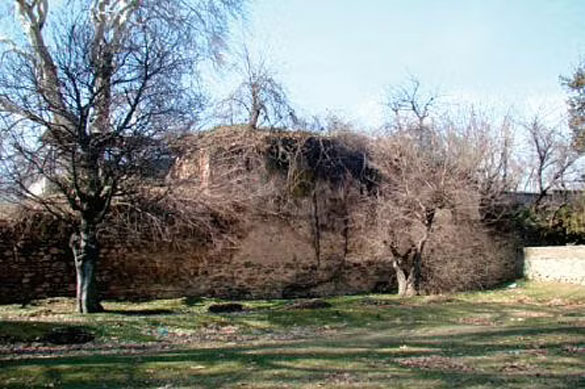 "This tree does not grow so tall, and while growing it takes an umbrella shape and gives a cool shade."Author

Bremji Kul, a magnificent ancient tree of Kashmir has almost been extinguished from its traditional habitats, and its traces are rarely seen in Kashmir now. This tree has been available in few varieties, and was mostly grown in graveyards, and also adjacent to Sufi tombs. It has a slow, yet certain growth.

This tree does not grow so tall, and while growing it takes an umbrella shape and gives a cool shade. Its characteristic feature is that its wood and roots are so soft and cool that in ancient times it was preferred to be planted in graveyards with the belief that its shade and roots would help in providing a cool and peaceful environment to the coffins buried in the graves.

This tree was hardly grown anywhere except adjacent to the tombs of Sufi saints and Muslim graveyards. Why this tree was not so commonly grown at other places.

Peerzada Mohammad Shabir, a Sufi priest, has got a view; he says that ‘during the ancient period several kinds of trees like Bremji and Chinar were not planted for commercial purpose, but for attaining spiritual deeds.

Such trees were highly revered by Kashmiris and they would hardly cut them for the purpose of firewood or any other commercial purpose. The Sufi priest says that the Bremji tree has been the most revered tree, this tree has been mostly associated with Sufi saints, who used to meditate under the shade of this tree. In fact, you will find this tree standing mostly in the old places associated with any Sufi saint or his tomb.

Maulana Noorud Din, another Sufi scholar, says that planting green trees in the graveyards is one of the Sunnah (traditions) of Prophet Mohammad (Peace be upon Him).

He said the Syed missionaries who arrived here in the 14th century AD to spread the message of Islam while following the traditions of the Prophet planted green and cool trees in their graveyards.

The tradition was later on adopted by disciples as well, who not only meditated under the green trees but also planted these trees in their respective graveyards.

While elaborating his point of view Maulana says that there is a Hadith documented in Muslim scripts which states that once Prophet Mohammad (May peace be upon Him) was travelling with his friends. He (SAW) reached a graveyard, where he observed a man in the grave in severe pain and distress.

The Prophet (SAW) asked for a few green branches of palm trees that were made available to Him. Prophet planted the branches over the grave and later in his brief address to his companions said; since the man in this grave was in pain and distress and these green branches would provide him certain relief.

Later on, this became the Muslim tradition, which also reached Kashmir. However, as no palm trees were grown here as such the Sufi missionaries’ preferred the Bremji tree which carried its distinctive feature of being cool and soft.

In fact, few specimens of this tree are still seen in olden Mazar's (graveyards) of the valley. The historical graveyards of Malkha, Mazari Qalan, Mazari Salateen and other olden graveyards of Kashmir exhibit a few rare and age-old magnificent Bremji trees.

One of the European travellers, Sir Walter R Lawrence in his monumental book The Valley of Kashmir has also provided a description of this rare tree. He writes that the Bremji is usually found in graveyards and in the vicinity of shrines, where it sometimes grows to a magnificent tree.

Interestingly he has measured one such tree at Andrahama Lolab, which has measured at 5ft from the ground, a circumference of 9 feet 3 inches. He also speaks of it as a soft and cool tree.

Bremji, scientifically known as ‘Celtis australis’, is learnt to grow more common in cooler climates. Its bark is smooth and grey, almost elephantine. The alternate leaves are narrow and sharp-toothed, rugose above and tomentose below, 5–15 cm long and dark grey/green throughout the year, fading to a pale yellow before falling in autumn.

The apetalous wind-pollinated flowers, the fruit is small, dark-purple berry-like drupe, 1 cm wide, hanging in short clusters, and is extremely popular with birds.

Scientists say that the plant prefers light well-drained (sandy) and medium (loamy) soils, including those nutritionally poor; it can tolerate drought but not shade. They further say that the Mediterranean climate is especially suitable for the plant.

Interestingly, the scientist’s view is no such different from Sufi’s experiences they say it is often planted as an ornamental as it is resistant to air pollution, and is long-living. This may be the other reason why it has been preferred in graveyards.

Herbalists say that this tree has medical importance as well; they say that the fruit of this tree is sweet and edible, and can be eaten raw, or cooked.

The decoction can also be used as an astringent for the mucous membranes in the treatment of diarrhoea, dysentery and peptic ulcers.

Indeed, this kind of tree has been very useful in terms of its spiritual and scientific merits, but unfortunately has almost been forgotten; it is hardly now grown anywhere in this land of Rishis and Sufis. The standing evidence of this tree is fast vanishing from the old and historic graveyards.

Since the tradition of planting trees for attaining spiritual favours has almost declined, and planting of trees has turned now into a commercial business, so only such varieties of trees grown in different nurseries have got commercial value.

In fact, Kashmir nurseries and plant growers have also turned indifferent to this kind of tree. They do not prefer such plants in their respective nurseries.

“We deal only with commercial plants and grow only those plants which are in demand in the market,’ said the proprietor of one of the nurseries in Kashmir.

He further said that ‘we grow different kinds of fruit and popular plants as these are being planted in heavy numbers in Kashmiri orchards and vacant lands’.

The plant growers and the government agencies involved in plantation drive should not forget the traditional trees altogether but shall also provide certain space to local plants in their farms, and nurseries.

Though carrying such a cultural, scientific and environmental importance this tree has altogether been neglected here. Although thousands of plants of various kinds of trees are every year planted on the vacant lands of the Kashmir valley, not a single plant of any traditional tree of Kashmir is being planted anywhere, which is grave negligence on part of agencies involved in social forestry.