‘Observe Ramadan in the True Spirit of Islam’

Imams in mosques throughout the Kingdom, including those in Makkah and Madinah, welcomed on Friday the holy month of Ramadan with an immense sense of piety and requested their respective congregation to strictly follow the teachings of the Holy Qur’an during the fasting period. 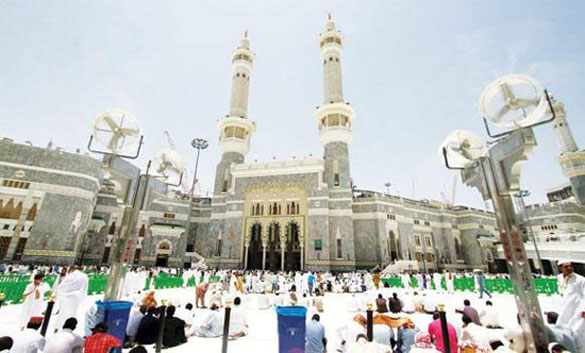 The Spirit: Worshippers Listen To the Friday Sermon under A Blazing Summer Sun in the Courtyard of the Grand Mosque in Makkah. (A Photo by Ahmed Hashad)

The Supreme Court in Riyadh called on all Muslims in the Kingdom to sight the crescent of the lunar month of Ramadan on Friday evening. In its announcement, the court requested that whoever spots the crescent of the blessed month of Ramadan to report to the nearest court and register his testimony, or report to the authority of the regional governorate.

The General Directorate of Civil Defense warned citizens and residents of the common accidents that occur in the kitchens during the preparation of Iftar (meal taken to break the fast).

“The accidents are mainly caused due to high temperatures and the failure to follow proper methods in dealing with the tools to prepare food during the frying process,” spokesman for the Civil Defense Col. Abdullah Al-Orabi Al-Harthy said Friday.

He pointed out that more than 30 percent of fire accidents in houses during Ramadan happen while frying food before the Iftar time. He said that during this time, there is an increased power consumption which leads to some electrical outages.

In Makkah, the Imam requested worshippers to observe the holy month in the true spirit of a Muslim according to the teachings of the Islamic faith. Ramadan is a month full of happiness and piety for all Muslims, the Imam said, pointing out that it’s a month which advocates peace, unity and understanding among Muslims. The Holy Qur’an was first revealed to humanity during the latter part of this month.

In his sermon on Friday, the Imam of the Prophet's Mosque in Madinah said the holy month provides a good opportunity for Muslims to cultivate healthy habits.

Explaining the values and virtues of the month, he said good deeds performed by Muslims during this month will be richly rewarded by Almighty Allah. “Those who perform good deeds will enter paradise in the hereafter, while those who ignore the tenets of the religion would meet with severe punishments.”

The Imam also reminded Muslims to give Zakat (charity) during this month and refrain from all actions abhorred by the religion.

An Imam in King Abdullah Mosque in Malaz in Riyadh described Ramadan as the month of charity and requested Muslims to help the needy to alleviate poverty. “Helping the less fortunate is a must during the holy month,” he stressed.

He also requested members of the congregation to cultivate the habit of fasting among their children during this holy month.

An Imam in another mosque said that Islam allows the sick to abstain from fasting but he stressed that they have to feed the poor to compensate for the days they don’t fast.

Pregnant and lactating mothers can refrain from fasting but they have to cover the lost days when they return to normal.

“The month is an ideal opportunity for people to unlearn bad habits and cultivate healthy behavioural patterns.”

Quoting an Islamic reference, an Imam at a mosque in Nasseriyah said: “A day of fasting during this holy month will keep a Muslim away from hell for 70 years.”

"You must mentally prepare yourselves to perform meritorious work during the holy month of Ramadan which comes once a year,” the Imam said.

Emphasizing the importance of fasting, he said: “The fasting person seeks closeness to Allah by avoiding all desires, giving love of Allah precedence over the love for himself.”

"In fasting there are advantages, benefits and attainment of rewards and proximity to the Creator.”

Exhorting Muslims to step up their pious and charitable acts and do deeds that strengthen social and filial ties in the month of Ramadan, he further said that they should vie with each other in obeying the commands of God by doing virtuous deeds and helping others.

"Fasting in Ramadan serves as a shield against evil temptations as the gates of Jahannum (Hell) will be shuttered and the gates of Jannah (Paradise) will be wide open,” he said, adding that it is an opportunity to immerse oneself in worship during the month, which is also an occasion for joy and communal celebrations.