The Night of Isra and Mi’raj: The Prophet’s Journey to the Heavens, Spiritual or Physical?

1.      The Prophet’s Journey was both spiritual and physical.

3.      As for the Hadith of al-Isra, there is unanimity among all Muslims on it," the Salafi scholar Ibn Kathir continued. It has only been disputed by heretics and atheists." 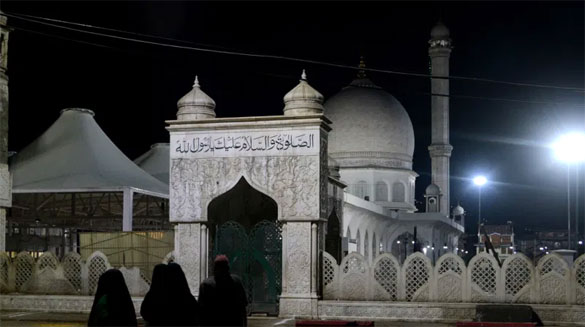 The Isra and Miraj, the Holy Prophet's midnight journey and ascension to the heavens, occurred on the 27th Night of the Islamic Month of Rajab around the year 621. The correct perspective denotes both a bodily and spiritual journey. The Quran only mentions Isra and Mi'raj in passing, however, the hadith goes into greater depth.

Allah Almighty says in the Quran,

“Exalted is He who took His Servant by night from al-Masjid al-Haram to al-Masjid al-Aqsa, whose surroundings We have blessed, to show him of Our signs. Indeed, He is the Hearing, the Seeing”. (17:1)

This verse describes the incident of Isra and Mi'raj, which is a sign of honour and a specific miracle of our Messenger of Allah (peace be upon him). The Arabic word Asra (in its past tense) is derived from the root word Isra, which means "to make someone travel at night." The word 'lailan' is then inserted, which defines the concept even more. The message was then given that the time spent at this event was simply a portion of the night, not the entire night, by utilising this term as a common noun.

Al-'Isra' refers to the journey from al-Masjid al-Haram to al-Masjid al-Aqsa stated in this verse, while al-Mi'raj refers to the travel from here to the seven heavens. The Isra' is established by the ultimate textual authority of this verse, and the Mi'raj is established by Ahadith. The term 'bi'abdihi' (His servant) is unique in that it refers to the Holy Prophet (peace be upon him). It demonstrates that, in this glorious environment of respect and welcome, when Allah Almighty, on His own decision, chooses to call someone His servant, a special link of love is formed, and that this is the highest honour a man can ever receive.

The Mi'raj was physical, according to the Qur'an, Sunnah, and Ijma.

The entire journey of the Isra' and Mi'raj was not only spiritual but also physical, as evidenced by the Holy Qur'an and the Ahadith.

The very first word of the Holy Qur'an in this Surah, 'Subhan' (Exalted is He!) contains a hint in this direction, as this word is meant to express wonder or to initiate a magnificent surprise. What was so extraordinary about the Mi'raj if it had only been spiritual or a dream? Every Muslim, and indeed every human being, can have a dream and claim that he or she went to the sky and accomplished this or that.

The second suggestion is found in the term 'Abd' (servant), which refers to a combination of body and spirit rather than a single spirit.

Furthermore, when the Holy Prophet (peace be upon him) told Sayyidah Umme Hani (may Allah be pleased with her) about the event of Mi'raj, she urged him not to mention it in public because it would be further falsified. What was there in the dream that might be falsified if it had been the matter of a dream?

When the Prophet finally told people about this event, the Makkan disbelievers labelled it a falsehood and mocked him, to the point where several neo-Muslims turned apostates (murtad) after hearing the news. If this had been a dream, the likelihood of such reactions would have been slim to none. And the fact that he had previously experienced some spiritual Mi'raj in the shape of a dream does not contradict it.

The Ahadith referring to the occurrence of al-Isra appear to be frequent and uninterrupted in Tafsir al-Qurtubi. Naqqash has recounted related stories from twenty of the Holy Prophet's Sahabah (peace be upon him). Then, in Al-Shifa, Qazi Iyaz added more information (Qurtubi).

"As for the Hadith of al-Isra, there is unanimity among all Muslims on it," Ibn Kathir continued. It has only been disputed by heretics and atheists." (Ibn Kathir)

The Event of Mi'raj According to Ibn Kathir

Ibn Kathir is an Islamic scholar mostly accepted by Salafi groups of Muslims. He says, “The fact of the matter is that the journey of Isra' came to pass when the Holy Prophet was awake, not dreaming”.

Ibn Kathir said after explaining the current verse in his Tafsir and providing a full backdrop of important Ahadith. The route was covered on buraq from Makkah to Baytul-Maqdis (a special heavenly horse to ride). When he arrived at the gate of Baytul-Maqdis, he tethered the Buraq near to it, entered the mosque of Baytul-Maqdis, and offered two Rakat of Tahiyyatul-masjid (prayer in honour of the Mosque) facing its direction. Following that, a stairwell was brought in with steps leading up from below. He ascended to the first heaven by this stairwell. He then proceeded to the rest of the heavens.”

The truth about this stairwell is only known to Allah. What it was, how it worked, and other details. Many other types of staircases are used in today's world as well. There are steps that automatically ascend and elevators that take one to the top. As a result, having any doubts or suspicions about this wonderful staircase is inappropriate.

The resident angels on each heaven greeted him, and he encountered blessed prophets stationed on each heaven, such as Hazrat Musa (peace be upon him) on the sixth heaven and Hazrat Ibrahim Khalilullah (peace be upon him) on the seventh heaven. After that, he walked beyond all of these blessed prophets' stations and arrived at a plain where he could hear the sound of a pen writing destinies. And he saw the Sidratul-Muntaha, the Far Tree in Jannah, which was encircled by angels of Allah and on which moths in gold and variegated colours were descending from above by Allah's decree.

The Holy Prophet (peace be upon him) saw Hazrat Jibra'il in his true form with six hundred wings at this location. And just then, he noticed a green flag covering the entire horizon. He also saw the founder of the Kaaba, Hazrat Ibrahim (peace be upon him), lying against the wall of al-Bayt al-Ma'mur (the well-attended House said to be located in Jannah just above the Baitullah in Makkah).

Every day, seventy thousand angels enter Bayt al-Ma'mur, where they will wait for their chance to re-enter until the day of Qiyamah. And with his own blessed eyes, the Holy Prophet (peace be upon him) saw the Jannah and the Jahannam. At the time, he was given the instruction to obligate his people with fifty prayers, which were later reduced to five. This demonstrates the significance and worth of Salah as the most important and meritorious of all deeds of 'Ibadah.

Following that, he returned to Baytul-Maqdis, accompanied by the blessed prophets he had seen on other heavens (as if) they had come to see him off as far as Baytul-Maqdis. He offered the prayer with all prophets at that time, as it was prayer-time. It's also possible that this was the Fajr prayer of the same day.

Ibn Kathir says that according to some, this event involving the Holy Prophet's prayer with prophets occurred before he ascended to the heavens. However, it is clear that this event occurred after his return because it was Hazrat Jibra'il who presented him to all prophets in the event relating to his meeting with blessed prophets in various heavens. If the incident with his leading the prayer had occurred earlier, there would have been no need for an introduction - and, for that matter, it is self-evident that the true aim of this travel was to visit with the heavenly hosts. It looks that doing so first is more likely.

After completing his real mission, all prophets came to say good-bye to him up to Baytul-Maqdis, and his precedence over others was physically demonstrated because he was appointed the Imam of the prayer through a signal from Hazrat Jibra'il. Then, when it was still dark, he rode buraq from Baytul-Maqdis to Makkah al-Mu'azzamah. (Tafsir Ibn Kathir, 17:1)

In his work, Dala'il al-Nubuwwah, Hafiz Abu Nu'aym al-Isbahani reports a narration from Muhammad ibn Ka'b al-Qurazi on the authority of Muhammad ibn 'Amr al-Waqidi, giving the following specifics of the event:

Al-Waqidi is weak in Hadith narrations, according to Hadith scholars, yet a cautious Muhaddith, such as Ibn Kathir, has reported his narration because this is not related to 'Aqa'id or Halal and Haram, and his narration is trustworthy in such historical topics.