1.    The act of serving human beings is known as Khidmat e Khalq in Islam.

2.    Some believe that people should only be treated nicely and served after they have accepted Islam. This isn't correct.

3.    The Sufis were able to win the hearts of the people by following the teachings of the Holy Prophet.

4.    How many ways are there to contact God?" a renowned saint was asked. He said that every atom in the universe is a pathway to God 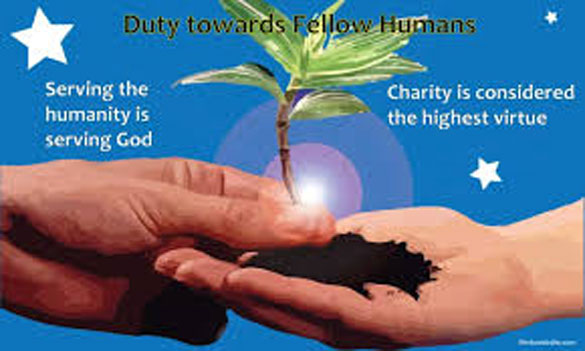 The act of serving human beings is known as Khidmat e Khalq in Islam. Islam teaches its followers to treat all human beings with morality and affection. It encourages Muslims to help them in their time of need. According to Islam, every creature is a member of Allah's people. The process of Khidmat e Khalq is given the rank of doing great obedience to God. This is the Islamic view that the Sufis completely realised and dedicated their entire lives to. Differences of opinion and religion, they maintained, should not be obstacles in the path of Khidmat e Khalq. Assisting those in need, regardless of ethnicity or belief, is, therefore a religious and moral imperative.

Some believe that people should only be treated nicely and served after they have accepted Islam. This isn't correct. The reason for this is because the issue of faith is in Allah Almighty's hands. Allah Almighty bestows the richness of faith on anyone who has honesty and sincere desire. When it comes to serving the people, be prepared to do so regardless of faith or nation, and serve the people solely for Allah's pleasure.

We learn Khidmat e Khalq by studying the biography of the Prophet (peace be upon him). It is narrated from Hazrat Anas and Hazrat Abdullah Ibn Masood that the Prophet (peace be upon him) said: “All creatures are the family of Allah. The one who is most beloved in the sight of Allah is the one who benefits his family the most. ” (Al-Tayseer Bi Sharh Al-Jami 'Al-Saghir, Bab Al-Shafaqah Wal-Rahma Ala Al-Khulq)

Hazrat Abdullah Ibn Umar narrates from the Prophet (peace be upon him) that “The Most Merciful [God Almighty] has mercy on the one who shows mercy, so have mercy on the people of the earth. [If you do so] The Lord of heaven will have mercy on you.” (Sunan al-Tirmidhi, Kitab al-Bir wal-Silah, Bab Ma Jaa fi Rahmat al-Naas)

Hazrat Abdullah Ibn Masood narrates that the Prophet (peace be upon him) said, “You will never be a believer unless you have mercy.” The narrator says that he said, “O Messenger of Allah (peace be upon him)! Every one of us is merciful. Thereupon he (the Prophet) said, "It does not mean the kindness and compassion that one of you has for the person closest to you” [Reported by Al-Tabrani]

The Sufis were able to win the hearts of the people by following the teachings of the Holy Prophet. People from several religions and nations came to them and adored them because of their impeccable manners. Even today, if we follow these Sufi principles of helping the people, we will be able to eradicate the market of hatred that exists in our society. Take a look at some of the upcoming events listed below!

Hazrat Salman Al-Farsi was the ruler and governor of Persian Madain, according to Hazrat Thabit. Madaain was visited by a man from Shaam [Syria]. He was carrying some personal items. He noticed Hazrat Salman, who was dressed in a robe, holding a heavy rope in his hand. He regarded Hazrat Salman as a labourer and requested that he come and carry his luggage. Hazrat Salman Farsi took his belongings and transported them away. When the people saw Hazrat Salman Farsi carrying his belongings on his shoulder, they said, "Hey!" He is the ruler of this town." The man then apologised, saying, "Excuse me, I did not recognise you." "I have already made the purpose to transport your goods to your place, and I can't abandon it in the midst without carrying it to the specified place," Hazrat Salmaan said. Hazrat Salman Farsi did not return until his items were delivered to their destination. (Ibn al-Jawzi, Safwatus Safwa, vol.1, p.247)

Hazrat Sheikh Khawaja Usman Haruni says, “When a person gives water to a thirsty person, then all his sins are forgiven. He becomes as if he has just been born from his mother's womb. He will be counted among the martyrs.” He further said, "Whoever feeds the hungry, Allah will fulfil a thousand needs of him and will free him from the fire of Hell and reserve a place for him in Paradise." (Annesul Arwaah, Majlis 10, Mashmoola Hasht Behesht)

Hazrat Sheikh Sharafuddin Yahya Muniri says in his Maktoobat-e-Sadi, “There are numerous advantages to Khidmat-e-Khalq. This service has some characteristics that are not present in any other type of obedience. One is that the rebellious self (nafs) dies and the mind's pride in superiority fades away. Humility and modesty are present. Morals, politeness, and decorum emerge. This imparts Sunnah and Tareeqah knowledge. The outward and internal appearances of man become clearer and more enlightened. All of these advantages are unique to the Khidmat-e-Khalq programme”.

It's also described in the same book: "How many ways are there to contact God?" a renowned saint was asked. He said that every atom in the universe is a pathway to God. But there is no method closer or better than delivering comfort to God's creatures, and we have arrived at this destination by pursuing this route and passing it on to our descendants. The saints have also stated that while the Sufi group's words, acts, and worships are indescribable, no obedience is higher or more valuable than the act of serving human beings. [Maktoobat-e-Sadi, Discourse 71)

Hazrat Khawaja Moin-ud-Din Chishti (may Allah have mercy on him) says “Darweshi (i.e. Sufism and Tareeqah) means that one who comes to it should not be deprived. If he is hungry, he should be fed, and if he is naked, he should be clothed. He should not be sent back empty-handed in any way. Instead, one should console him by inquiring about his health." (Aarifin Dalilul)

These are only a few samples. Aside from this, there are hundreds more instructions that teach us about human service (Khidmat e Khalq) and proper conduct. However, we must regretfully state that the spirit of Khidmat e Khalq and excellent behaviour is fading from our midst. People who are divided by religion believe that serving even their fellow religionists is bad. The Sufis' example, who were well-versed in Shari'ah and Tareeqah and practised Khidmat e Khalq, is undeniably a beacon for us and a wake-up call for the heart that has fallen asleep.