The Rain Prayer: Did it Really Work?

As most people know, California is going through one of the worst droughts in its history. 2013 was the driest weather in California in the last 400 years!

Many of the world’s religions have special supplications (“Duas” in Arabic) and prayers for rain. In fact many Christian Churches across California as well as many of the Western States of the United States have been asking their congregations to pray and fast in hopes that God will give us much needed rain. 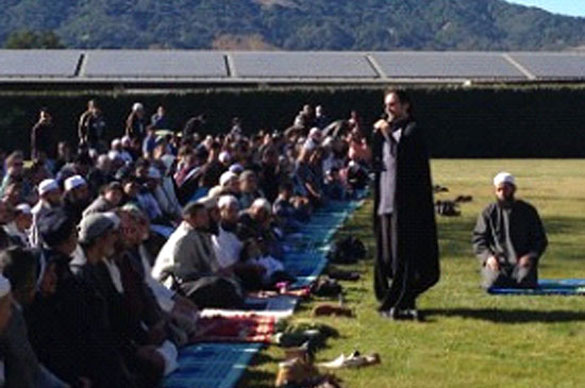 In religion of Islam, the Prophet Muhammad (S) also taught the Muslims a specific prayer to ask Allah (“God” in English) for rain. In Arabic it’s called “Salat ul Istisqa.”

On February 1st, 2014 the American Muslim community of the San Francisco Bay Area organized one of the largest prayers for rain at the Alameda County Fairgrounds in Pleasanton, CA. Over 1,000 people participated. It was a bright and sunny day with no clouds in the sky. (You can see some nice pics of the event from the SJ Mercury News.) The next day (Sunday Feb 2nd, 2014), not only did it rain, but it was the largest rainfall in California in 2014 (up to that point)!

Since we are living in a “Modern” and “Secular” world, where Science is King, there were many sceptics and unfortunately several “Muslims” also asked if the rain prayer was planned on a date when rain was already in the forecast.

I was not one of the organizers of the event (although I did assist with Media Relations before and during the event), I know that the event was planned several weeks in advance when there was no rain in the forecast.

Here are some facts about the Rain Prayer event:

1. Imam Tahir Anwar, one of the main organizers of the event, stated to me that the rain prayer was planned during the Grand Mawlid (Celebration of the Prophet Muhammad (S)’s birthday) event at the Santa Clara Marriott on Jan 18th, 2014.

2. They wanted to hold the rain prayer within one week of the Mawlid, but due to a scheduling conflict for Shaykh Hamza Yusuf, they selected the date of Sat Feb 1st to hold the prayer service.

3. They began advertising the event on January 25th, 2014. At that time there was no rain in the forecast and in fact according to Almanac.com, the forecast for the Bay Area weekend of Feb 1st – 3rd was “sunny and mild“!

Now, for those people who claim the date of Feb 1st was selected because rain was in the forecast that weekend, they are clearly incorrect.

But here is some additional facts about Muslims praying for rain BEFORE the scheduled Feb 1st event:

1. During the night of the Grand Mawlid (Jan 18th, 2014) a pamphlet which contained a long Dua (supplication) for rain was passed out to all the attendees (over 1,000 people) at the event and this special prayer for rain was recited at the closing of the program.

2. On Jan 11th, 2014 a group of 100 Muslims in Folsom, CA gathered near Folsom Lake and performed the rain prayer as well. Within 5 minutes of starting the prayer it began to sprinkle rain!

So who says that these two incidents are not the reason why it started to rain more within the following weeks?

Even though it rained heavily in the Bay Area the day after the larger prayer for rain in Pleasanton on Feb 2nd (see the article in the Contra Costa Times), we as believing Muslims do not know which prayer was accepted or whose specific prayer that God answered.

At the Alameda County Fairgrounds there were several non-Muslims who also attended and joined in the prayer for rain – including a man with a dog, who also was sitting in the last row of the men’s prayer lines. So perhaps God accepted the dog’s prayer? All joking aside, in our Dua (supplication), we ask God to give water to the plants and animals and ask God not to punish them as well as the innocent children for our sins.

Now one week later (Feb 8th, 2014), California is having it’s largest rain fall in almost 4 years from a long and concentrated tropical storm from the Pacific sometimes called a “Pineapple Express” where one storm can carry 15 times as much water as the Mississippi River!

Of course, we are still a long ways from recovering from the drought in California, but every little bit of rain helps. So even if you don’t consider yourself a “religious” person, it doesn’t hurt to pray.

After seeing me on the local news talking about the Rain Prayer a former co-worker of mine (who is Non-Religious and Not a Muslim) texted me: “[The Rain Prayer] Worked Already! Do it again!”