Repair and Regeneration in Our Bodies

Events in our bodies that we are unaware of take place within a meticulous order. The functioning of our organs, so essential to our survival, is not something we initiate and maintain of our own volition. Our organs are one of the miraculous systems flawlessly created by our Lord. Each of these organs starts working as a tiny collection of cells while the individual is still in its mother's womb, and they all flawlessly discharge their duties until the individual's life comes to an end. 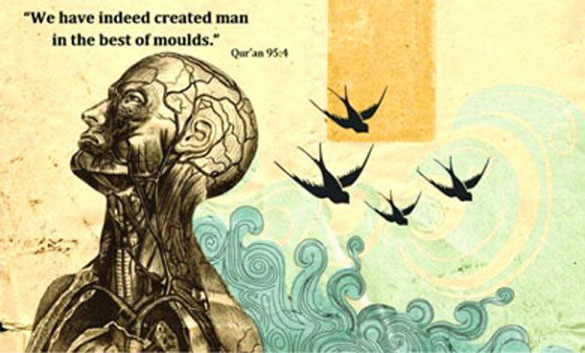 Research has revealed that in the event of any interruption in vitally important organs such as the heart, brain or liver, certain proteins or cells step in and repair the organ in question. However, proteins with no medical knowledge of course lack the consciousness with which to identify damage, develop suitable precautions and thus save a person's life; nonetheless, they are present in every human being on earth, ready to perform the same function. It is Allah's creation that bestows this order, glory and perfection. Allah is He Who meets the needs of all of His creations and is the Sufficient One (Al-Kafi), the All-Pervading (Al-Muheet) and has the power to do what He wishes as He so wishes (Al-Qadeer). He is the only One praised by all creation, the Praiseworthy (Al-Hameed). He it is Who originates, creates innovatively (Al-Badee). This is revealed as follows in the Qur'an:

He is the Originator of the heavens and earth. When He decides on something, He just says to it, "Be! and it is." (Surat Al-Baqara, 117)

The Self-Repair Of the Brain

Researchers have discovered that a mass of cells known as ChAT+ neurons are able to communicate with stem cells and stimulate the production of new neurons.

Chay Kuo, M.D. Ph.D of the Duke Institute for Brain Sciences says, "We have been working to determine how neurogenesis is sustained in the adult brain. It is very unexpected and exciting to uncover this hidden gateway, a neural circuit that can directly instruct the stem cells to make more immature neurons. The working principle in the nervous system is based on the transmission of electrical current by neurons that function like electrical wiring. In other words, it functions according to the same principle that today's electronic circuits function. Neurons interpret these currents and are able to communicate among themselves, which is a marvelous state of affairs.

Self-Repair Of the Heart

During a heart attack, heart cells die due to the sudden cessation of blood flow, resulting in irreparable damage to the heart. Following this damage in the heart, the patient's quality of life decreases considerably.

Until recently, it was thought that, in contrast to other organs, the heart had no ability to repair itself. However, we now know that this damage can be made good by the body. The protein known as thymosin beta 4 (TB4), which plays a key role in the development of the heart in children, stimulates sleeping cardiac stem cells in adults. Thymosin, which comes in two forms in living tissue, ± 1 and ≤ 4, is capable of reprogramming cells. This protein is today administered as a drug, and sends the stem cells a code about repair of the heart. The heart thus repairs itself with no other treatment being required. This protein, when given as a drug, increases cardiac performance by up to 25 percent by inducing cardiac stem cells to differentiate and become cardiac blood vessels, thus repairing the heart, and preventing loss of heart muscle cells.

The Regenerating Feature of the Liver

Even if 70 percent of the liver is removed, it can still regain its size to perform its functions within one or two weeks.

The mechanisms involved in the regeneration of the liver are still the subject of research.

One of the astonishing features of this system is the unbelievable speed at which liver cells divide while discharging their normal functions without interruption. What is even more amazing is the way that after their tasks have been discharged, cell division is stopped by a common decision. The following questions come to mind at this point:

How do cells know how much to multiply or when to stop? Where does the command to start or stop come from?

If no order to stop is received, do they themselves decide not to grow such as to inconvenience other organs?

There is no doubt that there can be no question of unconscious cells doing any of these. It is Allah Who creates this miraculous process from start to finish and Who issues the requisite commands.

Intelligence is essential even to understand the miraculous functioning of the organs in the body, and it is of course irrational and, quite frankly, unscientific to claim that they came into being by chance. Such flawless systems could never come into being as a result of a series of coincidences. The presence of such systems in the human body is evidence that they were created by Allah.

“We created you so why do you not confirm the truth? Have you thought about the sperm that you ejaculate? Is it you who create it or are We the Creator? We have decreed death for you and We will not be forestalled.” (Surat Al-Waqiah, 57-60)