The Institutionalisation Of Eid-Ul-Fitr Marks The Prophet’s Quest For Establishing Universal Brotherhood, Social Cohesion, National Integration, Cultural Festivity And Above All, Deep Humane Emotions For The Poor

1.    Eid-ul-Fitr returns every year to revitalize our faith in the universal values of brotherhood, social and cultural harmony, religious diversity and mutual respect, besides the spirit of charity.

2.    Prophet (pbuh) cultivated a composite culture in his city of Madina, using the Arabic term “Ummah” in his Constitution, Misaq-e-Madina which encompassed all religious communities, races, and ethnic tribes.

3.    For Indian Muslims, Eid-ul-Fitr is an open reminder that if they truly follow the peaceful Prophetic ideals in letter and spirit, they must act as an integral part of "One Nation", a multi-religious 'Ummah' in India bound by a Constitution which can be likened to Misaq-e-Madina in many respects.

4.    This year, Eid-ul-Fitr arrives as an open reminder for us Muslims to incorporate the magnanimous social values of the holy Prophet (pbuh) into our practical life, if we really wish to survive and achieve glory in these trying times. 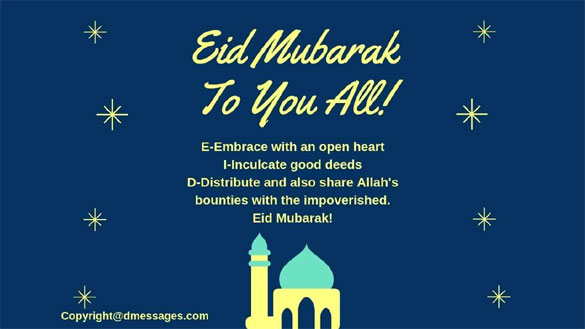 Few people know why Muslims’ first and foremost festival and the holiest occasion at the end of Ramadan—Eid-ul-Fitr—has been institutionalised in Islam. Persian Islamic scholar of Arab descent, Abu Dawud al-Sijistani who compiled one of the six canonical Prophetic Traditions, reports in his collection:

[After the migration from Mecca] when Prophet Muhammad (PBUH) arrived at the city of Madinah, he felt the need for a feast that could imbibe peace, unity and charity for the poor. Thereafter, the Holy Prophet received the divine inspiration to announce that "Allah has granted two blessed Eids: Eid-ul-Fitr and Eid-ul-Adha ..." (Abu Dawud, "Salat", 245).

According to this hadith, the origin and institutionalisation of Eid-ul-Fitr in Islam marks the Prophet’s quest for establishing peace and universal brotherhood, social cohesion, national integration, cultural festivity and above all, deep humane emotions for the poor.

Etymologically, the Arabic-origin word 'Eid' implies 'something that returns every year', and 'Fitr', another Arabic word refers to acts of benevolence and charity for the less fortunate. Thus, Eid-ul-Fitr together denotes an occasion that comes every year to revitalize a humane spirit in us towards the weaker sections of our society. While it comes as the most sacred Islamic festival at the end of Ramadan, it also serves as a beautiful reminder of our common heritage of peace, unity and inclusivity. In essence, Eid-ul-Fitr returns every year to revitalize our faith in the universal values of brotherhood, social and cultural harmony, religious diversity and mutual respect, besides the spirit of charity.

At a time when we, the people of India are in dire need of unity, inter-religious cooperation, national integration and social cohesiveness, the universal celebration of Eid-ul-Fitr seeks to bring us together in a spiritual synergy to preserve our shared local cultural heritage, which is India's inbuilt inclusivity, religious diversity and unity in multiplicity.

In Madina, where the Holy Prophet (pbuh) started to celebrate Eid-ul-Fitr, there was a multi-religious society which comprised not just the holy Prophet's Companions i.e. Muslims but also Jews, Christians, pagans, polytheists, and even atheists. Significantly, the Holy Prophet (PBUH) celebrated this diversity and nurtured religious inclusivity and cohesiveness in his society through various initiatives including the Eid-ul-Fitr. An epoch-making and historic initiative to strengthen inclusiveness and national integration was the written constitution of Madina, known as Misaq-e-Madina. Going by this, Prophet Mohammad (pbuh) formed "One Nation" in Madina and termed it "Ummah" bound by the constitution which was written in 622 CE.

Significantly enough for us Indian Muslims, Eid-ul-Fitr is an open reminder that if we truly follow the peaceful ideals of Prophet Muhammad (PBUH) in letter and spirit, we must act as an integral part of "One Nation", and a multi-religious 'Ummah' bound by the Indian Constitution which is considered the best and the most democratic in the world, and which can be likened to the Misaq-e-Madina in many respects. For, the Constitution of Madina laid great emphasis on unity and integrity among all the tribes and members of the state albeit with their religious, doctrinal and cultural distinctions. In fact, the first clause of the Misaq-e-Madina as laid out by the Prophet (PBUH) himself, goes like this: "We are all one Ummah (nation or people)". Thus, the holy Prophet fostered a composite culture in the city of Madina, using the Arabic word “Ummah”, which actually encompasses all religious communities, races, ethnic tribes and social ranks, each with their own racial, cultural, national, religious or linguistic distinctions.

The Prophet (pbuh) exhorted his followers to behave towards all of them as brothers and treat them as they want themselves to be treated. He inculcated noble humane values through the festival of Eid-ul-Fitr, with an aim to foster universal human brotherhood.

Among those prophetic traditions relating to the Eid-ul-Fitr are greeting people time and again, shaking hands and hugging when meeting or parting, visiting and comforting the sick, offering condolences to the bereaved, and exchanging gifts with other members of the society, sharing happiness with all means possible. Such acts that strengthen sociability, inclusiveness, fraternity, brotherhood and charity are the hallmarks of Eid-ul-Fitr.

Thus, Eid-ul-Fitr has been instituted in Islam to foster an inclusive social system that seeks to establish a humane, well-cultured and sympathetic society. In fact, Islam stresses the importance of social values through this most sacred festival, celebrating the spirit of peace, delight, kindness, compassion, brotherhood and equality among people of all traditions, castes, creeds and religions. This is the prime objective of celebrating Eid in Islam.

However, it is also aimed at distributing charity to the poor, and hence its full name is Eid ul-Fitr. The word Fitr in Arabic or Fitra in Urdu means a form of charity from the rich to the poor to help them celebrate Eid with the fullest festive spirit. This is precisely why Islam has enjoined upon Muslims on this day to distribute fitrah (a fixed amount of charity mandatory for every Muslim) to the poor. Besides, Muslims are exhorted in the Prophetic traditions to hold delicious feasts and invite friends and neighbours from all faith communities on Eid. Obviously, such noble activities help us strengthen bonds of love, mutual harmony, human brotherhood, and social integrity.

Most notably, Eid-ul-Fitr has appeared this year to rejuvenate the essential messages of the Holy Prophet (pbuh): love in place of hatred, patience in place of anger, forbearance in place of warfare, inclusivity in place of exclusivity and humility and not supremacy. These are the days when Muslims are living in a turbulent time characterized as the time of fitnah (tumult) in some of the Prophetic sayings (Ahadith). Therefore, they need to revive the inner spirit rather than the external form of Eid—which is to maintain sociability, good neighbourliness and care for the underprivileged, destitute and downtrodden people. This is the ultimate objective of Eid-ul-Fitr in Islam. Merely fasting during Ramadan and then feasting on delicious foods and wearing fancy dresses on Eid is not the ultimate purpose. This year, Eid-ul-Fitr arrives as an open reminder for us Muslims to incorporate the magnanimous social values of Islam in our practical life, if we really wish to survive and achieve glory in these trying times

Ghulam Rasool Dehlvi—regular columnist at NewAgeIslam.com—is an Alim and Fazil (Classical Islamic scholar) and a Delhi-based writer. Having graduated from a leading Islamic seminary in India, he is now pursuing his PhD at Jamia Millia Islamia University. Currently, he is also serving as Dean of the Faculty at an interfaith educational institution—Minhaj Learning & Research Centre (MLRC) in New Delhi.