Mission Of The Prophet: To Humanize Man

The Noble Quran is the Last Revealed Book of Allah, and the Prophet (pbuh)—the person through whom that Book came to humanity—is the person whose words and deeds are the first and most important commentary, and explanation on it. Every detail of his blessed life (Seerah) is thoroughly known to us. The Prophet (pbuh) was a devoted husband, an affectionate father, and a sincere friend; a successful business man, a far-sighted reformer, a brave warrior; a skilful general, an efficient administrator, an impartial judge, a great statesman, and more. “In all these roles, he played his part with exemplary ability, honesty, and integrity”.

The Prophet (pbuh) came to humankind, as Tariq Ramadan writes in his ‘In The Footsteps of the Prophet: Lessons from the Life of Muhammad’/ The Messenger “with a message of faith, ethics, and hope, in which the One reminds all people of His presence, His requirements, and the final Day of Return and Encounter”. He touched every aspect of human life and proved the greatest reformer the world has ever produced. He was a great savior, liberator, and protector of the ‘oppressed’ humanity. He removed social inequality; reconciled different creeds; bestowed security of life, property, and religion on other faiths; united warring tribes; gave women an equal footing with men; and did much more. In the modern times, Prophet (pbuh) is presented as a ‘reformer’ who considerably raised the social and ethical level of the Arabs of his time. He called for equality and mutual responsibility among his followers, and for the abolition of class privilege and extremes of wealth, and as Leo Tolstoy said, “Undoubtedly, Prophet Muhammad [(pbuh)] is one of the greatest reformers who rendered extensive service to the human community. … Such a man, indeed, is highly respectable and estimable”.

The Prophet (pbuh) was not only a religious preacher and reformer, but a great administrator as well. He presided over, after Hijrah from Makkah to Medina in 622 CE, the Commonwealth of Islam for ten years (622-632 CE). Syed Ameer Ali, in his A Short History of the Saracens writes: “The work done within that short period [of 10 years] will always remain as one of the most wonderful achievements recorded in history”. On the same lines, Gerhard Bowering, an ‘Islamicist’ (in the ‘Introduction’ of his Princeton Encyclopaedia of Islamic Political Thought) is of this opinion: “That one man could achieve so much in such a short time is astounding. … His message has stood the test of time for more than a thousand years, and his community has grown steadily over the centuries”. Similarly, a French historian, Alphonse Lamartine in his Historie de la Turquie, pays tribute to Prophet (pbuh) in these words: “he [Prophet (pbuh)] created a spiritual nationality which has blended together peoples of every tongue and of every race. He has left to us the indelible characteristic of this Muslim nationality, the hatred of false gods, and the passion for the One and immaterial Allah”. 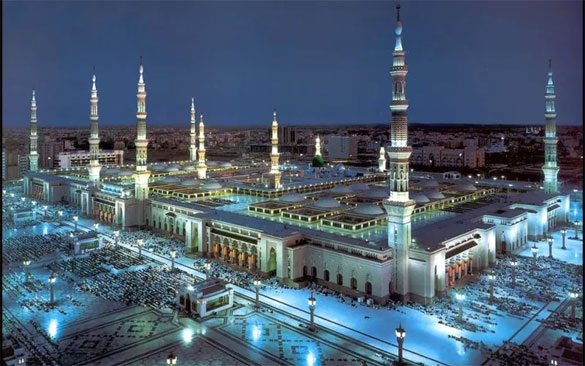 A saviour and liberator of oppressed humanity, the Prophet (pbuh) transformed the Arabs, within a short span of 23 years, into a civilized and religious nation. Justice, equality, and truth were his motto; and modesty, kindness, patience and generosity pervaded his conduct. Hadrat Anas (RA) is reported to have said: “I served the Prophet (pbuh) for ten years, and he never said to me, ‘Uf’ (a minor harsh word denoting impatience)”.

The Prophet (pbuh), as a leader and as political head of the City-State of Medina, never led the life of a king: he was a “King without kingly pretension”. He had no arms, no standing army, no body guard, and no palace. Bosworth Smith, in his well-known book ‘Mohammad and Mohammadanism’, describes him in these words: “Head of the State as well as of the Church, he was Caesar and Pope in one; but he was Pope without Pope’s pretensions, Caesar without the legion of Caesar: without a standing army, without a body-guard, without a palace, without a fixed revenue; if ever any man had the right to say that he ruled by the right divine, it was Mohammad [pbuh], for he had all the power without its instructions and without its supports”.

The nobility of soul, purity of heart, austerity of conduct, refinement of feeling, and stern devotion to duty and responsibility, were the distinguishing traits of the character of Prophet (pbuh). The Qur’an describes his character as “Uswah-e-Hasanah”: “Verily,  in  the  Apostle  of  God  you  have  a  good  example  for  everyone” (Q. 33: 21). Professor Tamara Sonn, in her ‘Islam: A Brief History’, admits that Prophet’s life is “a model for humanity of how to live every moment, and make every choice, in accordance with God’s will. The way he lived his life is described by the Quran as the best example of Islam”; and together with the Quran, his example (Sunnah) comprise the guidance and direction “Muslims need in their collective responsibility to establish justice”. Hadhrat Ayesha (RA) was questioned about Prophet’s personality and she replied: “His character [the ethics underlying his behaviour] was the Qur’an”. A “Living Quran” indeed!

The Prophet (pbuh) was a human being; a special human being (Q. 18: 111). He has been described by the Qur’an with many titles: “the best of the creation” (Q. 33: 21); “a mercy to the worlds” (Q. 21: 107); “the seal of all Prophets” (Q. 33: 40); and the Quran shows its respect for him in these words: “Verily, God and His angels bless the Prophet: [hence,] O you who have attained to faith, bless him and give yourselves up [to his guidance] in utter self-surrender!” (Q. 33: 56). Furthermore, the Prophetic Tradition states: “None of you is a believer till I am dearer to him than his child, his father and whole of mankind” (Muslim). Thus, all this brings us to the point that while God and the Quran have a higher status, it is Prophet Muhammad (pbuh) who, par excellence, is the “human face of Islam”. Abdul Hamid Sidiqqi (the translator of Sahih Muslim), has made this point clear and simple in the following passage: “It is often asked why love for the holy Prophet [pbuh] has been made the test of a man’s faith.

The answer is quite simple. It is in his august personality that we can know the Will of the Lord, His love for humanity, and his view, how man should live in this world. In him all those values which our Lord wanted us to uphold took flesh and blood without compromise and without alloy. He had been, therefore, made for us the focus of loyalty because it is through him that we have learnt the true concept of God, the real implication of Tauhid [monotheism], the role of man, his accountability in the Hereafter—in fact the whole of the religion”.

In the Prophet’s illustrious life, absolutely everything was “an instrument of renewal and transformation” from the slightest detail to the greatest events. All those, irrespective of their faith or ideology, who study Prophet’s life, can derive teachings from this, thus reaching toward the essence of the message of light of faith. Dr. Annie Besant, in her book ‘The Life and Teachings of Muhammad’, says: “It is impossible for anyone who studies the life and character of the great Prophet of Arabia, who knows how he taught and how he lived, to feel anything but reverence for that mighty Prophet, one of the great messengers of the Supreme”.

Calling the Prophet (pbuh) as “the Saviour of Humanity”, George Bernard Shaw (in ‘The Genuine Islam’) puts forth the view that the present world needs leaders like Prophet Muhammad (pbuh) for the general peace and comfort. Shaw states that “if a man like him were to assume the dictatorship of the modern world he would succeed in solving its problems in a way that would bring it the much needed peace and happiness”.

It is apt to conclude with this statement from Syed Ameer Ali’s The Spirit of Islam: “Fourteen centuries have passed since he [Prophet (pbuh)] delivered his message, but time has made no difference in the devotion he inspired, and today as then the Faithful have in their hearts and on their lips those memorable words: ‘May my life by thy sacrifice, O Prophet of God’.”

Original Headline: A Mercy for Humankind from the All Merciful