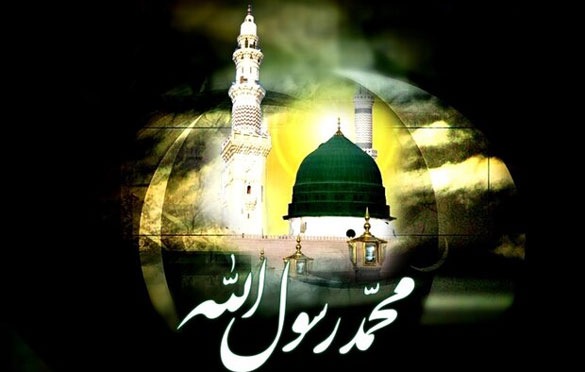 Muslims once were on top of the world in every sphere of life as it is evident from their progress when we turn the pages of history. In essence this was a revolution, based on revelation that changed the destiny of the world.  The reason for their progress was the observance of the relation they had with the Prophet. Everything will be determined by the relation with the Prophet (pbuh) so far as success in this world and hereafter is concerned. The universal degeneration in the rank and file of Muslims also suggests that these bases are absent or have been weakened, hence the degeneration; thus debate is closely related to the renaissance of Muslims and Islam in the modern times.

Our relationship with Prophet Muhammad (pbuh) is manifold. Before proceeding on this topic it is better to quote a verse from the Qur’an, which is the infallible word of Allah revealed upon the last Prophet and Messenger of Allah. Allah says in Holy Qur’an:

……. those who believe in him, and honor him, and help him, and follow the light which is sent down with him; they are the successful” (7:157).

This verse states that there are four criteria for a successful life in this world and here-after. And these four are also one of the important bases of our relationship with Prophet Muhammad (pbuh).

The first thing is to believe in the Prophet Muhammad (pbuh) as not only the Messenger but as the final and last Prophet and Messenger of Allah. He is the last Prophet, the divinely inspired man of truth and wisdom who saw light in his heart and mind at a time when forces of evil and falsehood had darkened the horizon. This belief should not be blind on our part but should be embedded in our hearts. It should be a realization of Prophet’s personality and his mission as divinely inspired. It is evident that his mission and his success bear witness to this fact.

Thomas Carlyle is apt to quote: “It is a great shame for anyone to listen to the accusation that Islam is a lie and that Muhammad (SAW) was a fabricator and a deceiver. We saw that he remained steadfast upon his principles, with firm determination; kind and generous, compassionate, pious, virtuous, with real manhood, hardworking and sincere. Besides all these qualities, he was lenient with others, tolerant, kind, cheerful and praiseworthy and perhaps he would joke and tease his companions. He was just, truthful, smart, pure, magnanimous and present-minded; his face radiant as if he had lights within him to illuminate the darkest of nights; he was a great man by nature who was not educated in a school nor nurtured by a teacher as he was not in need of any of this.” Likewise Karen Armstrong: “If we are to avoid catastrophe, the Muslim and Western worlds must learn not merely to tolerate but to appreciate one another. A good place to start is with the figure of Muhammad: a complex man, who resists facile, ideologically-driven categorization, who sometimes did things that were difficult or impossible for us to accept, but who had profound genius and founded a religion and cultural tradition that was not based on the sword but whose name—“Islam”—signified peace and reconciliation.” This shows that Prophet as an all-inclusive truthful social reformer who saved Arabia and all humanity from the clutches of evil.

The second criterion in this verse is to honor the Prophet. This is not the honor in the common usage but an intense feeling of reverence, love and attachment towards him. According to Allama Iqbal true love of the Prophet (pbuh) is not only emotional, but is manifested in all the spheres of life. He says: “The revered position of Prophet is in every Muslim’s heart. Our respect is due to the Holy name of the Prophet Muhammad (pbuh)” Iqbal beautifully portrayed the reverence and love to Prophet in these verses:

Prophet also said: “Hadrat Abu Huraira (R.A) and Hadrat Anas (R.A) both have narrated this Hadith that Muhammad (pbuh) said, “No one among you will become a believer until he or she will love me more than his parents, children and all other people”

The third criteria for success and one of our relationships with Prophet Muhammad (pbuh) is to help him. Before his departure his companions helped him to evolve and increase the intensity of his mission but now can we help the Prophet (pbuh).  Preaching and propagating his message of salvation to all humanity, we should be fully trained with the modern methods of argument to prove the truthfulness of the message of Islam -Islam must be shown– as it is the highest social order and the moderate spiritualism. Many predictions are written about Prophet (pbuh) in the major world religious scriptures which must be brought forward. It has to be shown that Islam has all the answers to the chaos prevalent in this world. The system of Zakat, the spiritualism in Salah, the brotherhood in Hajj, and the dignity for women etc. these and all other socio-religious things must be preached.

The last criterion in this verse is to follow the light which is sent down him from Allah. In most of the exegesis or Tafasir of the Qur’an the Nur or light mentioned in this verse here is a synonym for Qur’an. But I think that Nur or light mentioned here is the overall and holistic guidance of Islam whose primary text, of course is the Qur’an. Islam taken as a whole with the teachings stated in Qur’an and the teachings in the sayings of Prophet Muhammad (pbuh) is collectively a single light of Islam.

All the Muslims in this world claim that they have the intense love for Prophet Muhammad (pbuh) in their hearts. Our claim can only be true if we fulfill certain conditions after which our claim of the love for the beloved Prophet Muhammad (pbuh) can be true. I will sum up those conditions. The first and foremost condition for the true love is to follow the beloved (pbuh). Following and adopting to our utmost the commands and Sunnah of Prophet, second is to remember him all the time with intense affection, third is to yearn for being close to him and the intense desire to see him, fourth is to respect and revere him above all except Allah, fifth is to love all other whom Prophet loved and who were the beloved of Prophet. And those are his companions or Sahaba, his family or Ahli Bayat, his nation and language which is Arab and Arabic etc., sixth condition is to hate the enemies of beloved, seventh is to make the mission of our lives the very mission of our beloved Prophet Muhammad (pbuh) and to care intensely for the Ummah or community of Prophet without the barriers of caste, color, race etc. and the most important condition for the truthfulness of our love with our beloved Prophet Muhammad (pbuh) is to consider him completely infallible or Mas’um, with the permission of Allah.

It can be argued from preceding discussion that Muslims world over, rather humanity in general, must now introspect and strengthen their bond with the Prophet in letter and spirit. Muslims are in dire need to reflect on it.

Original Headline: Our Relationship with the Prophet (pbuh)