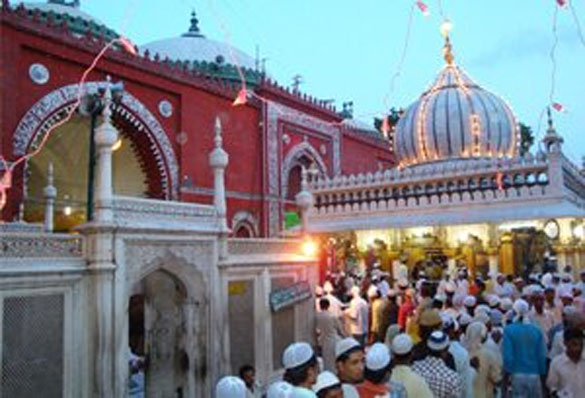 Not far away from the imposing Humayun’s Tomb in Delhi, which shoots into the limelight during high profile visits, lies a humble marbled tomb of the 14th century saint, Nizamuddin Auliya. He lived in Delhi through the realms of 13 sultans. However, the palaces, forts and resorts built by his contemporary monarchs are now a wilderness of ruins. Yet, people from different walks of life throng the Sufi saint’s shrine. The purpose of their visit is diverse, but the cosmic attraction of the place brings in hundreds of people every day from around the world.

What we know of the saint is through numerous myths and legends that have reached us by word-of-mouth. Nizamuddin Auliya was qualified to become a qazi or judge and his oratory skills were as refined as his follower-poet Amir Khusrau’s. But he never bothered to pen his profound thoughts. Perhaps, because, as he used to say, “The works of great souls are discussed at large, but no one knows how they lived their life.” For a Sufi of his stature, leading a life with meaningful social and spiritual engagement was in itself an inexplicable divine path. He chose to remain a fellow human being to lessen the struggles of other children of God. He would never allow anybody to leave his khanqah-e-chillah sharif or monastery-hospice unsatisfied. Some of such events and greatness were recorded by two of his followers, Amir Hasan Sijzi and Amir Khurd in Fawaid ul Fuad and Siyar-ul Auliya, respectively.

He believed that devotion to God is of two kinds: lazmi or intransitive — where an individual comes closer to God through prayer and meditation, and muta’addi or transitive — where you assist your fellow beings to lead a smoother life. He performed both, instead of writing and intellectualising his enlightenment. He believed that there was no better way of attaining gnosis than bringing happiness to human hearts. He was a teacher of great repute and would only give hints and relate stories when asked for a solution.

He inherited this tradition from Baba Farid, who, in turn, was initiated to this line of living by Moinuddin Chisti, the founder of Chistiya Silsilah. Nizamuddin’s enlightenment happened in his early 20s at the behest of Baba Farid. Among the Sufis, the human existence switches between the nafs or the material ego and the qalb, the soul. In the sphere of nafs, we tend to get insecure and hence it triggers mischief, animosity and strife. In the arena of qalb lies the source of eternal joy, peace and happiness.

Nizamuddin Auliya lived in a profound cloud of qalb. As the legend goes, Sultan Ghyasuddin Tughlaq, during his campaign in Bengal, sent a message to the saint, threatening to take his life on his return to Delhi. The saint remained undeterred, smiled and pronounced in Persian, “Hunooz Dilli door ast” — “Delhi is a long way off.” As fate would have it, the sultan died in an accident on the other side of the Yamuna just before he could reach Delhi.

However, the saint cautioned his followers that a miracle is like a screen, which obscures reality from view. The first step to enlightenment is to achieve clarity of sight. Every human action covers the stage of khatra or knowing, azimat or feeling, and fay’l or willing. So, if the stage of knowing remains concealed in darkness, the action would be erroneous. That’s why he used to say that self-criticism and reasoningwith one’s self is better than spending 70 years in prayer.

Like Baba Farid, he, too, kept his doors open to all and sundry. However, he refused to meet the sultans as he thought they came to waste the time of a dervish. He had nothing to offer to those who wanted to hold on to power. Once, Sultan Jalaluddin Khilji insisted on meeting him. He sought an appointment, which was politely refused. The saint said, “My house has two doors, if the sultan enters through one, I will exit through the other.” When Jalaluddin planned a surprise visit to his quarters, poet Amir Khusrau, the keeper of the Holy Quran at his court, informed the saint about the sultan’s plan. On the day of the visit, Nizamuddin left for Baba Farid’s monastery in Pakpattan. When Jalaluddin heard of it, he summoned the poet at once. The clever poet replied in his defence, “If I disobey you, I will only lose my life, but by playing false to my master, I will lose my faith.” The sultan was pleased with his reasoning and pardoned him.

Nizamuddin never tried to curb natural individual aptitude. For the same reason, he never asked Amir Khusrau either to stop coming to him or write verses in praise of the sultans. The saint lived a passive life but the world came to his door. He was a pacifist, as he believed that violence created more problems than it solved. If a man places a thorn in your way, and you place a thorn in his way, there will be thorns everywhere. But possessing good qualities should never lead to vanity, as Nizamuddin said, “A man is in his worst state when he considers himself good and pious.”

These fragments of incidents suggest that to be the Mehboob-e-Ilahi or Beloved of God, one of Nizamuddin’s popular titles, you don’t have to prove anything but to live in the sphere of qalb as much as possible in the time that has been granted to you by the Almighty, and the rest will be taken care of by Him whose apparent non-existence make the universe live.

Source: The Speaking Tree, The Times of India, New Delhi