Between Allah and His Believers, There is No Intercessor But True Repentance

1.    Relationship Between The Creator And The Creation Is Linked To Each Other

2.    Believers Offer Namaz Five Times A Day And Ask For His Forgiveness In Every Dua After the Namaz

3.    Acknowledgement Of A Sin And Its Repentance

4.    Forgiveness for the Wrongdoings Committed against a Human Being

The relationship between the Creator and the creation is linked to each other. The Creator knows the strengths and the weaknesses of His creation and the creation knows his Creator is All-Knowing and thus there is no need for an intercessor between the two. The human being is prone to faults and Allah, the Merciful has promised forgiveness if the repentance is genuine and is not repeated time and again.

Forgiveness is just one step away from the believers. A believer has to sincerely confess his wrongdoings in his supplication (دعا) with the faith that Allah is All-Forgiving and that He will forgive. Generally, all the believers offer Namaz five times a day and ask for His forgiveness in every Dua after the Namaz.

As it is an everyday relationship of a Muslim with his Creator, they, the Ashraf ul Makhluqat,  do not need an intercessor. Acceptance of the repentance solely rests on the sincerity of the supplicant. Besides after every Namaz Muslims can ask for His forgiveness anytime and in any place, as Allah is omnipresent and  ‘Allah is He on whom all depend.’ (Chapter 112: Al-Ikhlas) - Muhammed Ali

Acknowledgement Of A Sin And Its Repentance

The repentance of a man means returning to the will of Allah and expressing determination not to tread the path which Allah Almighty and His Prophet Muhammad (SAW) have frowned upon.

Repentance is taken as an important trait of a human being to remain steadfast in all that he does for the betterment of his life after death. Allah has revealed a Surah ‘Al-Taubah’ in the Holy Quran on this subject for the benefit of the human being.

Forgiveness for the Wrongdoings Committed against a Human Being

Islam is a complete and universal way of life. It does have moral lessons for all of us to follow. For example, during all the talks of repentance in front of God and asking His forgiveness, we must not forget that this repentance is mainly aimed at the wrongdoings committed in disobeying the commands of God, as far as our fellow human beings are concerned, we have to repent for our sins in front of them and ask for their forgiveness. Sins committed against a human being is a sin in front of Allah too but Allah forgives only after the concerned person forgives. Allah, the Most Merciful, has bestowed the right to forgive to the person against whom the act of sin is committed.

We have to follow the following points for forgiveness from Allah, the Almighty:

To accept your sin and admit it before Allah;

There should be a sincere commitment to not repeating the offence;

Asking for forgiveness from Allah;

Allah is Merciful and Forgiving and so He forgives on repentance. Consider the following Hadees narrated by Anas:

Allah the Almighty has said: “O son of Adam, so long as you call upon Me and ask of Me, I shall forgive you for what you have done, and I shall not mind. O son of Adam, were your sins to reach the clouds of the sky and were you then to ask forgiveness of Me, I would forgive you. O son of Adam, were you to come to Me with sins nearly as great as the earth and were you then to face Me, ascribing no partner to Me, I would bring you forgiveness nearly as great as its.” Narrated/Authority of Anas Listed in: 40 Hadith Qudsi

Without doubting Allah’s forgiveness and His being merciful, the believers have to be aware of the following sins that are unforgivable. We mention below the Quranic Ayat and Ahadees concerning those great unforgivable sins:

Allah states in the Quran,

Indeed, they who conceal what Allah has sent down of the Book and exchange it for a small price – those consume not into their bellies except the Fire. And Allah will not speak to them on the Day of Resurrection, nor will He purify them. And they will have a painful punishment – Surah Baqra, verse 174

2. Withholding Water from Others

Holy Prophet (PBUH) said, To such a man Allah will say on the Day of Resurrection,

‘Today I withhold My Blessings from you as you withheld the superfluous part of that (water) which your hands did not create.’ –  Sahih Bukhari, Book 97, Hadith 72

A person who took an oath on the goods of a Muslim in the afternoon and then broke it – Sahih Muslim, Book 1 Hadith 205

4. The One Who Disobeys His Parents

The Messenger of Allah said,

Three (are the persons) with whom Allah would neither speak nor would He absolve them on the Day of Resurrection.

He would not look at them and there is grievous torment for them: the aged adulterer, the liar king and the proud destitute. Sahih Muslim, Book 1 Hadith 202

We should not take repentance as negative. It is a very positive way of living. The above mentioned unforgivable sins are there in our lives in large and abundant number. People are discussing the Quranic verses, calling them names and asking for their modification or alteration. There are cases of upholding waters on the national level. Oaths and agreements are being broken without any fear of God, in whose name it is accepted. We are seeing how badly our older generation is being treated in the name of the generation gap. 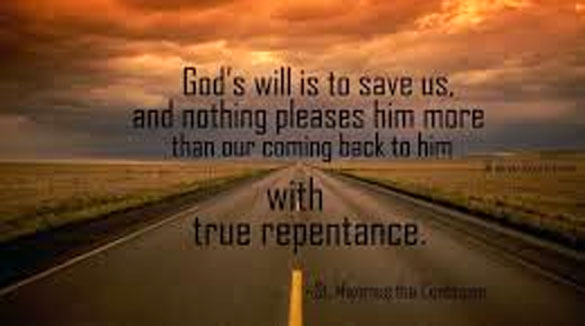 Repentance is Not Negative

Repentance takes away the burden of sin, which is very heavy to carry all through life. After accepting one's guilt one feels spiritually high and it is almost a beginning of a spiritual life that is all in the service of humanity.

No religion will deny the fact that our world has gone to dirt because of the sins committed by us against our Creator and our fellow human being. It is hard to find any ‘happy news’ in the newspapers besides mayhem and chaos everywhere. The world has come to its knees in front of the present epidemic as it had during the past pandemics. Is it not because the world is not accepting its guilt and is not repenting? Is it not the time, human being consider to leave the path of destruction and take to humanity?

May Allah empower us to take the right path and stay away from the sins and accept our repentance.