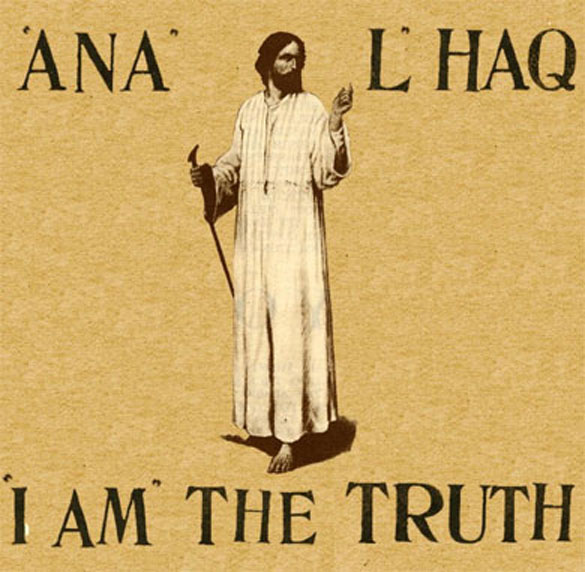 From The Chapter on

[The numbering in brackets corresponds to our forthcoming translation of the paragraph chapters of al-Qushayri’s entire Chapter on Doctrine from the beginning of his Risala (Eds. ‘Abd al-Halim Mahmud and Mahmud ibn al-Sharif. Cairo: RidaTawfiq ‘Afifi, 1974.)]

AL-HALLAJ is Abu Mughith al-Husayn ibn Mansur al-Hallaj al-Baydawi al-Wasiti (d. 309) the ascetic, he hailed from Persia and was raised in Iraq. He first accompanied al-Junaid; al-Nuri and others then became known in 299. After accusations were raised to the ‘Abbasi Caliph al-Muqtadir Billah he was jailed on charges of heresy, then tortured to death in unspeakable fashion. Many if not most of the Ulema consider him one of the Friends (Auliya’) of Allah, such as Ibn Khafif who visited him in jail, Abu al-Qasim al-Nasir Abadi, al-Qushayri, Ibn ‘Ata’ Allah, Ibn al-Hajj, Ibn ‘Aqil – who wrote Juz’ fi Nasr Karamat al-Hallaj (“Opuscule in Praise of al-Hallaj’s gifts”) –, Ibn Qudama, al-Tufi, Ibn al-Mulaqqin, al-Munawi, al-Sha‘rani, etc. Among his sayings: “Take care of your ego; if you do not make it busy, it shall make you busy” and “Whoever points to Him is an aspirant-Sufi whereas whoever points on His behalf is a Sufi.”

AL-QUSHAYRI is Zayn al-Islam Abu al-Qasim ‘Abd al-Karim ibn Hawzan ibn ‘Abd al-Malik ibn Talha ibn Muhammad al-Qushayri al-Naysaburi al-Istiwa’i al-Shafi‘i al-Ash‘ari (376-465), the Teacher, “the absolute Imam, jurist, Mutakallim, scholar of Principles, Qur’anic commentator, man of letters, grammarian, writer, and poet, the spokesman of his time, leader among his contemporaries, the secret of Allah in His creation, the Shaykh of shaykhs, the Teacher of the Congregation and most advanced one of the Fold, the goal of those who tread the Path, the ensign of Truth, wellspring of Felicity, pole of Leadership, and grace personified. He never saw such as himself nor did any who saw him ever see such as him in his perfection and brilliance. He gathered together the two sciences of Sharî‘a  and Haqîqa and explained in the best manner the principles of the Path” (‘Abd al-Ghafir al-Farisi). He was also an expert in horse and swordsmanship. His Risalaila al-Sufiyya is the earliest complete treatise of its kind and probably the most respected Sufi treatise in Islam.

DOCTRINE OF AL-HALLAJ ON THE DIVINE ATTRIBUTES

[17] “All that appears through body is necessarily an accident (‘arad).

[18] “That whose assemblage comes about through cause-and-effect (al-adât) is held together through its powers (quwâhâ). [1]

[19] “All that comes together at one time goes into dispersion at another time.

[20] “All that something else causes to subsist is characterized by dependency.

[21] “All that imagination can possibly apprehend can be pictured.

[34] “He is transcendent beyond the states of His creatures: there is not for Him the least deliberation (mizâj) in His creation, nor working (‘ilâj) in His acts.

[42] “and His Tawhîd is to distinguish Him clearly from His creatures.

[43] “Whatever you imagine in your imaginings, He is different from that (mâtusawwiru fil-awhâmi fa huwa bikhilâfih).

[44] “How can that which He Himself began analyze Him? (kayfayahullubihimâminhubada’ahu). [7]

[45] “Or how can that be part of Him which He Himself gave rise to? (aw ya‘ûduilayhimâhuwaansha’ahu).

[47] “Nor can conjectures apprehend Him.

[49] “His nearness is His generosity (qurbuhukarâmatuhu).

[50] “His distance is His contempt (wabu‘duhuihânatuhu).