Pakistan: Death to the Apostates 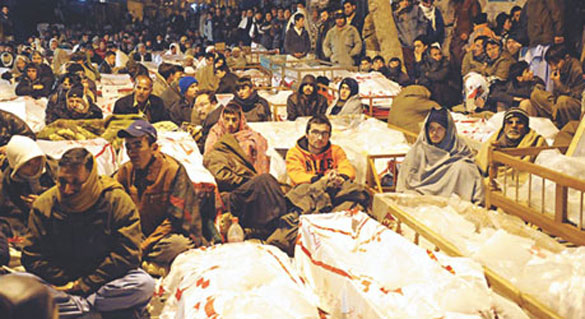 The plight of Pakistan's Shia community has never been worse. Numbering 30 million, the country has the second largest concentration of Shia Muslims in the world. The founding father of Pakistan, Muhammad Ali Jinnah was a Shia himself. Yet the Shias of Pakistan face near genocidal circumstances. In the latest chain of anti Shia violence, two bombs exploded in a Hazara (a Shia community with Central Asian origins) neighbourhood of Quetta killing 96 people. The first bomb hit a snooker club frequented by members of the Hazara community. The second bomb that claimed many more lives targeted those who had gone to aid the victims of the first bomb. Even for this beleaguered and resilient community, the latest spate of violence was unprecedented.

The family members of those killed protested by refusing to bury their dead. Braving torrential rain and freezing conditions that saw of a dip of 7 degrees below the mercury scale, they staged a sit-in at Alamdar Road, the site of the latest attack, demanding that the provincial government be sacked and the army be handed over the responsibility of provincial state security. In the initial stages, the government seemed unwilling to cave in to pressure. However, the refusal of the bereaved families to bury their dead served as a powerful gesture and it moved people across Pakistan. Protests broke out in other cities, supporting the Hazaras of Alamdar Road and eventually the government ceded to their demands.

The show of solidarity that the Hazaras received in the wake of the latest violence is unprecedented in Pakistan. Many were optimistic that the nation has finally risen against the sectarian terrorists. However, few Sunnis have bothered to participate in these protests. Most Pakistanis view the Shias as apostates of Islam and for many, the idea justifies silence in the face of barbaric anti Shia violence.

At the forefront of the violence has been the Sunni sectarian organisation Lashkar-e-Jhangvi (LeJ), which was quick to claim responsibility for the Alamdar Road bombings. Since 1999, LeJ death squads have openly roamed the streets of Quetta, acting with impunity. Locals say that death squads could not have operated so efficiently unless the authorities are complicit. With the advent of the 21st century, the plight of the Shias has worsened with each passing year.

The situation took a turn for the worse in 2012, when LeJ allied with the Pakistani Taliban, one of the most vicious organisations in this terrorist infected country. 2012 was one of the bloodiest years for the Shias with more than 400 casualties, more than double that of the last year. In this year, the LeJ also issued a threat calling on Shias to leave Quetta or face death. The Shias of this city are already confined to two neighbourhoods of Quetta, and they hardly venture outside these zones. Previously considered safer abodes for the city's Hazara community, the violence has over the years moved increasingly closer to home. No longer are the neighbourhoods safe. The snooker club where the bombs went off was one of the last remaining recreational facilities for the Hazara community.

Quetta bears the brunt of Pakistan's anti Shia violence, but it is hardly the only place where Shias are killed indiscriminately. From the bustling port city of Karachi, to the remote corners of North Western Pakistan, Shias have been targeted for slaughter. At Gilgit, a Northwestern corner of the Frontier provinces, passengers were taken off a bus and those identified as Shias were executed. In Karachi, along with the frequent bombings, the Shia intelligentsia has been subjected to an assassination campaign.

The actions of the Pakistani state, notably the country's powerful army has been dubious. For three decades, the Pakistani state and army had patronised religious organisations for armed operations in Afghanistan and India. After Pakistan became an US ally in 2001, many of these groups turned against their former patrons.

In response, the Pakistani army acted indecisively, supposing that they needed these groups to advance their foreign policy aims in the region. So while in public the Pakistani army seemed determined to destroy some of these terrorist organisations, behind the scenes they maintained tactic alliance with many of them, defying international pressure. So while the LeJ is perceived as an anti state organisation, the biggest sectarian organisation Sipah-e-Sahaba (SSP) operates openly spreading the message of hatred. The group, banned in 2002, got away by simply changing its name and at present even fields their candidates in elections. SSP leaders enjoy State protection. The SSP leadership maintains that they are not involved in the actual violence. However the reality is that members of SSP regularly end up as members of the LeJ and the Pakistani Taliban. The SSP acts as an outlet that provides an endless stream of soldiers for the banned terrorist organisations, and the Pakistani government is well aware of the process.

Many attribute the current predicament to President Muhammad Zia's Pakistan of the 1980s. The general who had come to power through a military coup, cashed in on religious sentiment to boost his credentials. Along with the war in Afghanistan, this led to the creation of a Pakistan where religious radicals had an increased say in the affairs of the state. An atmosphere was created where anyone perceived as being a bad Muslim risked death. The Shias, like other religious minorities were not in the good books of the 'good Muslims'. Earlier in 1971, the Pakistan army justified the genocide in former East Pakistan by claiming that the inhabitants of the land were not 'good Muslims'. Such sentiments on part of the Pakistani State have given rise to religious intolerance and a subsequent state of anarchy in the country.

For years, terrorists from the Sunni community have been on the march against the Shias. While many Sunnis might not support the bloodshed, they have been unwilling to speak up on behalf of the beleaguered community. As long as the silence of the Sunnis continues, Shias will continue to find Pakistan a very unsafe home. The Pakistani government and the powerful armed forces must take the purges of the Shias with utmost sincerity and must act decisively against the groups that are perpetuating the anti-Shia pogrom.

Pakistan is not the only country that has tasted the blood of the Shias in recent history. The Shia-Sunni animosity is almost as old as the religion itself. However, the two communities have also existed peacefully from time to time. Shias and Sunnis all over the world must come together to stop the present brutality in Pakistan and beyond.