Syed Kareem* has been in hiding for weeks. He fears if he is seen on the streets of Karachi, the Pakistan city he calls home, he will be a dead man walking.

His ordeal began with a Facebook post in early September, where he condemned the killers of a Shia Muslim martyred centuries ago. Though Kareem had meant it as a post of religious devotion, it caught the attention of an extremist Sunni Muslim group, who called him a traitor to Muslims. 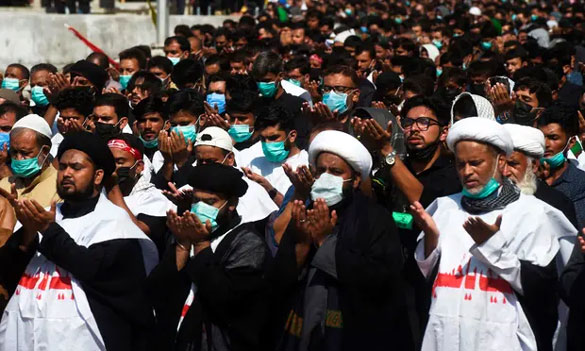 Shia Muslims mourning the death anniversary of Imam Hussain, the grandson of the Prophet Mohammed, in Karachi on 8 October. Photograph: Asif Hassan/AFP/Getty Images

Two days later, the 21-year-old student found himself the subject of a police report, accused of violating Pakistan’s draconian laws on blasphemy. He is one of over 50 Shia Muslims in Sunni-majority Pakistan, who have been booked under blasphemy and antiterrorist charges over the last month. The youngest was three years old.

“I fear they will kill me,” said Kareem, his voice shaking as he spoke from his place of hiding. “I am being targeted because I am from a Shia religious minority. I fear for myself and my family.” With the police on their way to interrogate him, and fearing the violent fate that extremist Sunni groups in Pakistan inflict on those accused of blasphemy, last month Kareem and his family chose to disappear.

Over the past month, Pakistan has seen an unprecedented rise in attacks and arrests of its Shia population, who make up between 15% and 20% of the Sunni-majority country, the largest Shia community outside Iran.

As well as the 50 who have been charged in the blasphemy crackdown, five have been killed since September and many more Shia families and well-known figures have gone into hiding. Last week, in Punjab, police beat up and arrested 22 Shia Muslims, including seven women, who were taking part in a ceremony to mark a Shia martyr.

Blasphemy is a capital offence in Pakistan and even unsubstantiated allegations can lead to mob violence and lynchings against the accused.

Bakhtawar Jaffri, a Shia rights activist in Punjab, said he had recently filed a police report for anti-Shia hate speech but it had been ignored. “In contrast, even the baseless and fake cases from the other side are being entertained by police,” she said.

Then, in mid-September, a march of more than 30,000 people, organised by extremist Sunni Muslim groups, gathered in Karachi over two days to call Shia Muslims “unbelievers” and “blasphemers” and called for their beheading. It was the largest anti-Shia march seen in decades in Pakistan, and was copied in other cities including the capital Islamabad.

Shia Muslims also fear their religious freedom is being legislated away. In July, Tahaffuz-e-Bunyad-e-Islam [protection of foundation of Islam bill] was passed by the Punjab assembly, which supported only the Sunni interpretation of Islam, provoking a huge backlash from the Shia community.

“Persecution seems to be waiting for the Shia minority,” said Hamza Baloch, a founding member of Secular Shia Voices, an advocacy group. “At first, they used hashtags, then killed us and rallied against us. Now they’re coming up with legislation to eliminate the Shia minority.”

At the forefront of anti-Shia campaign in Pakistan are two hardline Sunni Muslim groups, Ahl-e-Sunnat-Wal-Jamaat (ASWJ) and Tehreek-e-Labbaik Pakistan (TLP). ASWJ had previously been banned in Pakistan under the Anti-Terrorism Act before it was lifted in 2018 but is still globally considered a terrorist organisation.

Sectarian persecution of Shia Muslims has been a long-running fracture in Pakistan, exacerbated by the proxy wars fought on Pakistan soil by Sunni-majority Saudi Arabia and Shia-majority Iran, as well as the US ‘“war on terror”. As one senior security official speaking on condition of anonymity, alleged: “We can’t ignore the role of regional and international powers in sectarianism in Pakistan … Iran supports the Shia militia here.”

However, the vehement sectarian resurgence began in 2017 when the Pakistani government began making concessions to the extremist Sunni Muslim groups. In 2017, TLP was responsible for forcing a law minister to quit over a perceived softening in the blasphemy laws. Then, in the 2018 election, ASWJ and TLP were allowed to run in the election, winning seats in parliament.

In the same election, ASWJ also threw its influential backing behind 70 candidates from Imran Khan’s Pakistan Tehreek-e-Insaf (PTI) party, which won and formed the government.

Despite their well-documented extremist positions, over the past two years TLP and ASWJ have been allowed to assemble, make public anti-Shia speeches, carry out rallies, run for political office and mobilise against the Shia community, ensuring their power and influence in Pakistan has gone from strength to strength.

The Khan government, meanwhile, has been accused of both turning a blind eye to rising sectarianism from hardline Sunni groups, which reportedly enjoy patronage from state and military officials, and also using their support for political gain at a time when the government is weak and the economy is collapsing.

Dr Nauman Naqvi, an associate professor at Habib University in Karachi, said: “Since Pakistan’s economic and political outlook appears increasingly troubled, the ruling power see Sunni majoritarian populism as the only option to secure stability, undercut democratic forces and distract from the grave political and economic crises that hover over Pakistan.

“The large-scale presence of these constitution-phobic groups is a clear and present threat to civil and constitutional rule in Pakistan,” added Naqvi. “It threatens to plunge the country into anarchy.”

Even Fawad Chaudhry, currently serving as the minister for science and technology in Khan’s government, conceded that sectarianism was an issue that was getting “out of hand”.

“Unfortunately, due to the history that Pakistan has had, especially with regards to security, this remains a huge problem,” said Chaudhry.

* Name has been changed to protect identity