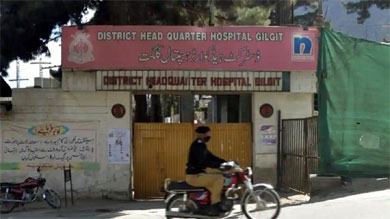 There is only one Covid-19 testing centre for the entire Gilgit-Baltistan territory with capacity to test 15 people per day.

Gilgit-Baltistan (G-B), in proportion to population, has the highest number of Covid-19 cases in Pakistan. So far, 607 people have tested positive in a territory with less than one and half million people. Heroes like Dr. Osama Riaz and paramedic Malik Ashtar who unfortunately died while performing duties without virus protective kits have become a source to galvanize society. Locals blame the authorities for committing criminal negligence by not transporting Dr. Osama to Islamabad to save his life. Dismal economic condition and lack of preparedness could lead to more deaths in coming weeks.

G-B is not a constitutional part of Pakistan and therefore survives on financial handouts from Islamabad. Locals including the Chief Minister, Hafiz Rehman, blames Islamabad for denying adequate funds to cope with the Covid-19 situation. Islamabad continues to reject provisions of protective gear with the excuse of fund shortage. Medical professionals are still not sure about the exact scope of positive cases as many people remain undetected due to faulty testing kits. Authorities warn that Islamic devotees returning from the Tablighi Jamaat congregation could stimulate local virus transmission.

Locals are yet to benefit from the medical aid which military helicopters collect from the Chinese officials at the Khunjerav Pass. There is only one testing centre for the entire territory with capacity to test 15 people per day. At this rate, existing patients in Nagar alone, which is one of ten districts of G-B, would take eighty days to complete the process. Some hotels now function as quarantine centres but accommodate a small portion of patients. For now, G-B has only 15 ventilators for over 400 urgent-care patients and most of these ventilators were bought by local private donations. Transporting patients to Islamabad is cumbersome and economically impractical for most among locals.

Naveed Murtaza, a local activist states that the people of District Hunza, which borders China, are protesting after failing to obtain stimulus fund. He said that videos have emerged of students of G-B sleeping on roadsides in Pakistan while waiting for government help. Local media reports ailing and starving prisoners and political activists protesting in different jails of G-B. “This is no way to thank G-B which provides for more than half of Pakistan’s water needs. Pakistan should take lead from other countries and immediately release political activists in these testing times”, says Naveed.

Pakistan and China are using the pandemic to deepen control over G-B and squeeze more resources. Pakistani rulers call G-B country’s lifeline since CPEC related multi-billion dollar projects would fail without Gilgit facilitating border link between Pakistan and China. In the name of assisting local administration during the pandemic, Pakistan is expanding military presence and subjugating a territory that lawfully belongs to India. Pakistan’s behaviour is compelling a large majority of locals to demand withdrawal of its troops and seek complete independence. In the past, Pakistan sought help from Chinese army to quell such dissent. In 2010, media reported on the presence of eleven thousand Chinese troops in the region as part of CPEC security apparatus.

Given the situation, people in G-B feel apprehensive about Chinese staffs resuming work on CPEC projects. Mohammad Lateef, a concerned activist from Skardo opines that locals fear the corridor will carry the virus deeper into the valleys. “Locals see CPEC as an instrument of invasion which destroys environment, culture and social fabric without much benefit to the people. They fear China will force concessions from Pakistan by using CPEC as debt weapon”, says Lateef. The merger of Macao and Hong Kong have taught China techniques to seek concessions from weaker nations to expand the Han empire. Hidden behind the testimonies of camaraderie, China plans to buy out assets in G-B, threatening freedoms, democratic values and national identities.

Sajjad Raja, a political leader from Pakistan-occupied-Kashmir (POJK) accuses Pakistani military of moving Covid-19 patients to Mirpur. Many among locals think that Pakistan is risking lives of millions of POJK natives to siphon money from the Western aid agencies, says Raja. Another local leader, Amjad Ayub attests that many hotels in POJK were now crowded with Pakistani patients. “Authorities forced local Mirpuris out of buildings and hospitals to accommodate Pakistanis. Staffs and equipment at Mohi-uddin Hospital were now at disposal of Pakistani patients while locals; wait for medical facilities, POJK belongs to India, and Pakistan has no right to abuse the territory to draw international attention”, exclaims Amjad.

Ishaq Sharif, a leader from District Bagh reveals that Pakistan invaded and divided J&K by employing religious terrorism and now it is hurting locals by changing demography through Covid-19, “We are invaded by Pakistan army, not India. Entire world is praising India for securing ration for Kashmiris during Corona pandemic while Pakistan abuses its own people to attract international funds, Pakistan which does not miss a chance to abuse India is now begging PM Modi for ventilators and hydroxychloroquine. Seventy years of deprivation under Pakistani rule is now compelling people in POJK and G-B to look towards India for basics like food and medicines”, exclaims Ishaq.

Jafar Ismail, a resident of Muzaffarabad says that Pakistani army continuously talks about Kashmir valley and its Corona patients to distract Pakistanis away from the dismal situation in POJK and G-B. Pakistan betrays the people of G-B and POJK. It has no will or capacity to fulfil demands of local Muslims yet pretends to care for the Muslims in Kashmir valley. He warns Pakistan was only interested in keeping Punjab safe and prosperous by filling coffers with earnings from POJK and G-B.

Senge H Sering is a Washington DC-based researcher and human rights activist born in Pakistan-occupied Gilgit-Baltistan. He runs the Institute of Gilgit Baltistan Studies in Washington.