Dear Imran Khan, Where Were You When My Church Was Attacked?

My name is Fouzia*. Other important facets of my identity are that I am a Christian school teacher, born in Peshawar and I incidentally happen to be a Pakistani. 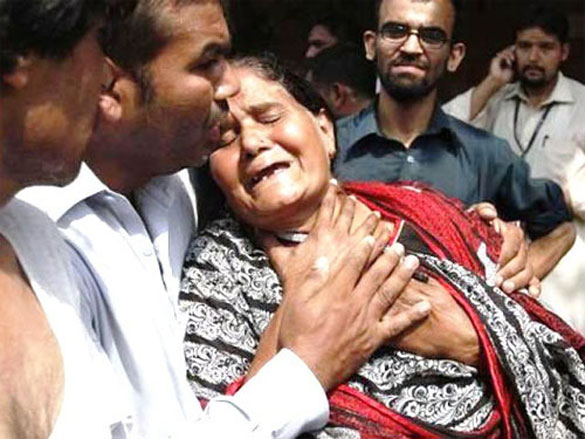 To a politician, the fact that I am Pakistani should be most the important, yet in a country ravaged by militancy, where religious extremists have usurped the limited secular space, my faith perhaps carries more weight and authenticity.

After this brief introduction, Mr Imran Khan, I want to tell you my story, but I must warn you in the beginning that it is a tale of anguish and pain. I have chosen you for the narration of my story because your party is at the helm of affairs in the province of Khyber Pakhtunkhwa – the capital of which is my beloved Peshawar.

It was the morning of September 22 when I stepped out of my house to attend the Sunday service in the All Saints Church; to remind you this is the church located in the old quarters of the Kohati area and dates back to 1893. Balmy breeze blew that morning, refreshing my soul and spirit.

Indeed, All Saints Church was a piece of beauty and some now say it resembled a mosque because of its minarets, a fort-like entrance and a small dome, over which was erected an iron cross. The architecture of the Church was a testimony to the emotional attachment of its builders to the architectural uniqueness of this land as well as to their faith.

On that fateful day, as I came out of the church and was conversing with a few of my former students, a loud explosion flung me a few feet away.

Was it the start of an apocalypse? I thought.

As I recovered consciousness and looked around, I saw pieces of human flesh scattered on the ground. A few steps away, I found yellow slippers of a young girl, but if you can bear to read it, her severed foot was still encased in the blood-coated slipper. Was it the slipper of the little girl- dressed in a flowery frock, her face touched by innocence- who was earlier going round in circles outside the church?

In the mayhem surrounding me at that time, the yellow slipper was all I could think about.

As the sounds of pain began emerging from the debris of the church and the sirens of ambulances began to wail, I realised that a bomb had gone off inside the church.

Despite my hairbreadth escape from the clutches of death, it was a day of loss for me. Not only had I lost friends and acquaintances but I had also lost my innocence, that is, my belief in humanity and in the ability of human spirit to transcend the boundaries of class and creed.

Mr Khan, I am writing you this letter to escape the dark shadows cast by this inhuman act. I want to find the courage to reach out to the injured around me and to start the process of healing. At present, I am moving in circles, big and small, like the little girl in the flowery dress before the blast, but cannot find the path out of this circular movement.

I have donated blood to the injured, paid for funeral services of poor members of my community and condoned with the relatives who have lost all in the blast. Still, my heart and soul are filled with a void- it is an emptiness defined by deadly silence.

Mr Khan, amidst the uproar of violence, your silence was most pronounced. Instead of condemning the perpetrators of the bomb blast, you alluded to a conspiracy to derail negotiated settlement of militancy in Pakistan. Here I am quoting your words:

“Isn’t it strange that whenever peace talks are pursued, these attacks take place and I want to point out that there was also a drone strike today.”

After hearing these words on a TV channel, I am left with no choice but to ask you a few questions: Why are you linking the attack on the Christian community with drone strikes? How can a drone attack, targeted by a foreign power be equated with a bomb blast, detonated by militants, infesting the territory of Pakistan?

My dear Imran Khan, you showed many Pakistanis the dream of a Naya Pakistan. I, along with many others thought that, Naya Pakistan would be a place where Pakistanis, regardless of their religion, could profess their faith freely.

Ah, it appears, that was just a beautiful fantasy.

I just want to end my story with these words: By not condemning the terror group, you are encouraging a brigade of narrow minded people in the unbridled pursuit of their lethal agenda that will eventually destroy everything of value in our beloved Pakistan- be it old or Naya.

*Note: This story has been narrated to me by Fouzia (her name has been changed to protect her identity). She is a teacher at a Catholic Missionary School. She shared some parts of her horrid experience with me on the phone while a Peshawar-based friend, who happens to be Fouzia’s pupil, told me rest of her story.

Sameera Rashid is a research analyst, blogger and a graduate of King's College, London, in public policy.