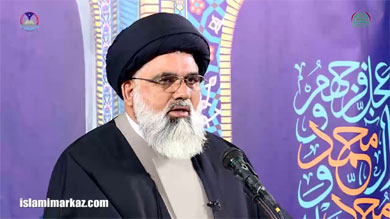 Allamah Syed Jawad Naqvi is an eminent Pakistani Twelver Shia cleric. He has three PhDs in Philosophy, Sociology and Fiqh

In his Friday sermon delivered on 29th May, a prominent Shia cleric of Pakistan, holding three PhD degrees said that under the Citizenship Amendment Act the Muslims of India will  either be  driven out  of the country or or will be slaughtered collectively by the Modi government. He also raised a serious question on the religious status of Indian Shias. During the sermon, he said,

"I was reading an article on Wikipedia in which the Shias of India were listed as a non-Muslim minority along with the Sikhs, Jains, Parsis etc. This was shocking to me. When I contacted my friends in India (Lucknow) for a clarification, what they told me was more shocking to me. They provided me a print out of the news report of an English newspaper written by one Namita Bajpai. According to the report, the representatives of two groups of Shias of Lucknow had submitted an application to the Home Minister Amit Shah requesting him to list the Shia community as a protected non-Muslim minority.

Syed Naqvi opined that the two groups of Shias of India have apprehensions that in the next phase of the Citizenship Bill, the Muslims in India will have two options: Leave India or be ready to be killed. That's why they have requested the government to include Shias in the list of non-Muslim minorities. Syed Naqvi said that for being included in the list of non-Muslims the Shia representatives even said that since they don't believe in the Caliphate as the Sunni Muslims do, they should be considered non-Muslims."

When we search the internet to confirm the statement of Mr Naqvi, we come across a news report published in the New Indian Express, dated 9 December 2019 by Namita Bajpai. The excerpts of the reports are reproduced here:

"Amid the raging controversy over Citizenship Bill (CAB) which the Centre is pushing hard in Parliament, the All India Shia Personal Law Board(AISPLB) and the UP Shia Wakf Board have decided to request the central government to increase the ambit of Bill to include Shias in the list of protected non-Muslim communities who would be given citizenship on account of their religious persecution in the neighbouring Islamic countries."

According to the report Maulana Yasoob Abbas, the spokesman of the AISPLB said,

"If the government is taking Jains, Buddhists, Christians, Sikhs and Parsis under its wings to give citizenship to the members of these communities, then Shias must also be included as they are a minority within the minorities in the country."

"Batting for the inclusion of the Shia community in CAB protected communities, Shia Central Waqf Board Chief Wasim Rizvi also made the same request to the central government.

Welcoming the CAB Rizvi claimed that the Shia Community which was only 15 per cent as compared to 85 per cent Sunnis, was being persecuted not only in Pakistan, Bangladesh and Afghanistan by majority Sunnis but facing atrocities across the Muslim world ---- Syria, Saudi Arabia, Kenya etc for being Shia for the last 1400 years."

Mr Rizvi further said, "Shias are targeted around the Muslim world by majority Sunni radical Muslims because we refuse to acknowledge 'controversial caliphates' dominated by Sunnis after Prophet Mohammad. Rather we acknowledge the family members of the Prophet after his death. So we are being executed by the Sunnis across the world."

Citing this report, Maulana Jawad Naqvi said that if this is true then this is a serious crime by the representatives of the Indian Shias as this will give justification to the takfiri organisations of Pakistan for calling the Shias Kafir. It will also give justification to the takfiri forces in Saudi Arabia, Indonesia and other Muslim countries. He said that this was a crime greater than the crime of Yazid."

Maulana Jawad Naqvi continued his propaganda in his next sermon on 5th June by saying that Muslims of India will be driven out of India in the next phase of the Citizenship Act. His view was based on the interview of an Indian professor whose name he did not remember who said that Hindustan was for Hindus and Muslims should go to Pakistan, the Shias should go to Iran, the Buddhists should go to China and the Parsis should go to Iran. India is not their country.

Maulana Naqvi has formed an exaggerated opinion about the situation arising out of the Citizenship Act in India. He has been telling Pakistani Muslims that 18 crore Indian Muslims are going to be either driven out of the country or being massacred though the fact is that the Hindu community is more affected than Muslims by this Act and both the communities are opposing the Act peacefully and democratically. By giving an unrealistic picture of the Muslims of India based on misinformation, he is not only misleading the Muslims of Pakistan but also doing injustice to his profession and stature.