Lady Warsi: Christianity at Risk of Extinction in Areas of Persecution

Christianity is in danger of extinction in some countries because of persecution in areas where its followers are in the minority, a British government minister has said.

Christians were being driven out of regions in countries such as Syria and Iraq, where the religion first took root, said Lady Warsi, who has responsibility for faith communities. 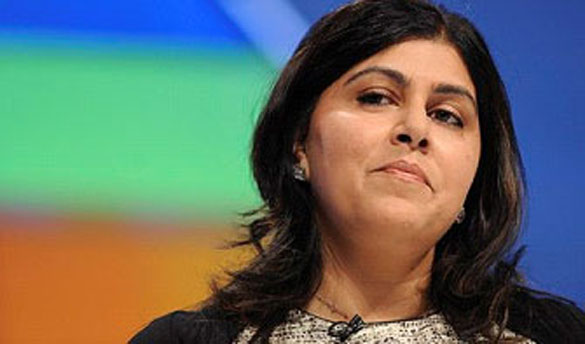 She raised her concerns in a speech at Georgetown University in Washington DC in which she called on politicians in countries such as Pakistan to "set the tone" for tolerance of religious minorities.

Lady Warsi told the BBC Radio 4 Today programme: "I'm concerned that the birthplace of Christianity, the parts of the world where Christianity first spread, is now seeing large sections of the Christian community leaving, and those that are remaining feeling persecuted.

"There are huge advantages to having pluralistic societies – everything from the economy to the way people develop educationally, and therefore we all have an interest in making sure that Christian communities do continue to feel that they belong and are not persecuted in the places where this religion was born.

In some cases, Christians were targeted for "collective punishment" by majority groups in retaliation for what they perceived as the injustices committed by western powers, she said.

"Tragically, what's happening is they are being seen as newcomers, being portrayed as an 'other' within that society, even though they have existed there for many, many centuries.

"What we are seeing, sadly, is a sense of collective punishment meted out by local groups – sometimes states, sometimes extremists. [Christians] are seen as legitimate targets for what they perceive as actions of their co-religionists. This concept of collective punishment and them being seen as agents of the west or agents of regimes is wrong. We need to speak out and raise this with the countries where this is happening."

The Foreign Office minister said she had already had "very frank conversations" with ministers in Pakistan, telling them that senior politicians had a duty to speak out against persecution and set a standard for tolerance.

She said 83% of countries had constitutions guaranteeing freedom of religion, but did not implement those provisions.

"There's an international consensus, in the form of a Human Rights Council resolution on the treatment of minorities and tolerance towards other faiths. But we need to build political will behind that.

"There was some interesting research in the US which said that the way in which a minority community is treated after an extremist incident is very much dependent on the tone that politicians set. Politicians do have a responsibility to set the tone, to mark out legal parameters as to what will and will not be tolerated."

Asked whether Lady Warsi's warning of the possible extinction of some Christian communities was correct, the leader of Catholics in England and Wales, the archbishop of Westminster, Vincent Nichols, told Today: "I think in some parts of the Middle East that is probably true.

"There are real challenges for Christians in this part of the world to support and get alongside them and also for politicians to understand that the presence of Christians is a great mediating factor, often for example between different segments of Islam.

"It's a mix that has lasted for 1,000 years and no western government should promote a course of action in the Middle East which would end with a new government which was intolerant to its historical neighbours and colleagues within the territory."