The Vicious Schism between Sunni and Shia Has Been Poisoning Islam for 1,400 Years - And It's Getting Worse

The war in Syria began much earlier than is generally recognised. The conflict actually began in the year 632 with the death of the Prophet Mohamed. The same is true of the violence, tension or oppression currently gripping the Muslim world from Iraq and Iran, though Egypt, Bahrain and Saudi Arabia to Yemen, Pakistan and Afghanistan.

A single problem lies behind all that friction and hostility. On Tuesday, Britain's leading Muslim politician, the Foreign Office minister Baroness Warsi, obliquely addressed it in a speech she made in Oman, the Arab state at the south-east corner of the Arabian Peninsula strategically positioned at the mouth of the Persian Gulf. The religious tolerance of the Sultanate, she suggested, offered a model for the whole of the Islamic world. It certainly needs such an exemplar of openness and acceptance.

What most of the crucibles of conflict in the Middle East have in common is that Sunni Muslims are on one side of the disagreement and Shia Muslims on the other. Oman is unusual because its Sunni and Shia residents are outnumbered by a third sect, the Ibadis, who constitute more than half the population. In many countries, the Sunni and the Shia are today head-to-head.

The rift between the two great Islamic denominations runs like a tectonic fault-line along what is known as the Shia Crescent, starting in Lebanon in the north and curving through Syria and Iraq to the Gulf and to Iran and further east.

The division between Sunni and Shia Muslims is the oldest in the Middle East – and yet it is one which seems increasingly to be shaping the destiny of this troubled region as thousands of devotees from both sides pour into Syria. Jihadist al-Qa'ida volunteers on the Sunni side and Hezbollah militants on the Shia are joining what is fast becoming a transnational civil war between the two factions.

There are around one and a half billion Muslims in the world. Of these, somewhere between 10 and 20 per cent – estimates vary considerably – are Shia. In most countries these Shia are minorities in a Sunni homeland. But in Iraq, Iran, Bahrain and Azerbaijan they outnumber their co-religionists. 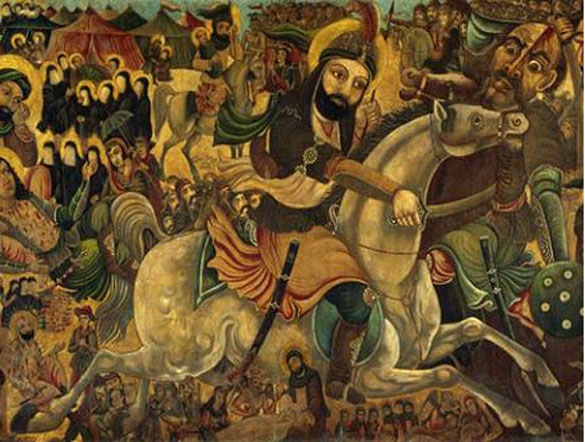 A painting of the Battle of Karbala in 680AD, in present day Iraq, which is remembered by both Sunnis and Shias (Corbis)

What makes Syria different is that there a Sunni majority is ruled by a Shia minority. The Alawites, the sect to which President Bashar al-Assad and much of his army officer elite belong, are Shia. That situation is the mirror opposite of Iraq under Saddam, where a Sunni strongman lorded it over a Shia majority – until the invasion of Iraq, when elections put the Shia in charge, insofar as anyone can be said to be running that chaotic country.

The division between the two factions is older and deeper even than the tensions between Protestants and Catholics which bedevilled Europe for centuries. The two Christian denominations had a shared history for 1500 years. By contrast the rift between the two biggest Muslim factions goes right back to the beginning – and a row over who should succeed the Prophet Mohamed as leader of the emerging Islamic community when he died in the early 7th century.

In the last 10 years of his life Mohamed inflicted total defeat on the pagan tribes of Mecca and by doing so united the entire Arabian Peninsula. Around 100,000 people had submitted to the rule of Mohamed and of Allah. Tribal alliances in Arabia in those days usually disintegrated on the death of the leader, or after the short-term military objectives had been met and the spoils divided. Often succession would pass to the leader’s son. But Mohamed had no son, only a daughter. And his inheritance was spiritual as well as political.

The majority of his followers thought his closest associate, Abu Bakr, should take over. They became the Sunnis. But a minority thought the Prophet's closest relative, his son-in-law and nephew Ali, should succeed.

Shia is an abbreviation of Shiat Ali "the party of Ali". Intrigues and violence followed, with Mohamed's widow Aisha (who was also the daughter of Abu Bakr) leading troops against Ali. Eventually Ali was killed, as was his son Hussein, and persecution and martyrdom became ingrained in the Shia psyche. As the years passed rift hardened into schism. The seeds of civil war had been sown.

The two sides agreed on the Quran but had different views on Hadith, the traditions recorded by Mohamed's followers about what he had said and done in his life. Diverging traditions of ritual, law and practice soon emerged. A clerical hierarchy, topped by imams and ayatollahs, became crucial in Shi'ism. By contrast, Sunni Muslims felt no need of intermediaries in their relationship with God – an approach which has abetted the rise of extremist zealots like al-Qa'ida. The Sunnis became happy to depend upon the state, which their adherents mostly controlled.

The chief Shia religious festival became Ashura when devotees would beat themselves to commemorate the death of the Prophet's grandson Hussein at the Battle of Karbala in 680. Various Shia sub-sects formed, including the fanatical Assassins, the Alawites in Syria and the Ismailis, whose leader is the Aga Khan. Some mystical Sufi movements created a bridge between Sunni and Shia but hard-line Sunnis regard the Shia practice of venerating saints and visiting shrines as heretical – which is why Sunni extremists bomb Shias on pilgrimage in places like Karbala in Iraq today.

Yet for much of the 1,400 years since the death of the Prophet the majority of Sunni and Shia Muslims have not routinely allowed their theological differences to create hostility. Some Sunnis included ritual denunciations of Ali in their prayers, but in many times and places the two sects have co-existed peacefully.

From time to time, however, violence has flared in which the Shia, in the main, have been brutally and even genocidally persecuted. In 1514 an Ottoman sultan ordered the massacre of 40,000 Shia. Mughal emperors in India between the 15th and 19th centuries routinely executed Shia scholars, burned their libraries and desecrated their sacred sites. Inter-communal violence has recurred in Pakistan.

There have been periods and places of concord. In 1959 the most influential centre of Sunni scholarship, al-Azhar University in Cairo, admitted Shia jurisprudence to its curriculum. In Azerbaijan, where the Shias are in the majority, there are mixed mosques where both sects pray together. But early in the 20th century the Saudi royal family made discrimination against the Shia official and destroyed most of the Shia holy places. With the rise there of the Sunni fundamentalism known as Wahhabism, severe restrictions have been placed on Shia practice and its leaders jailed. Some Saudi scholars brand Shi'ism as a heresy "worse than Christianity or Judaism".

The fanatics of al-Qa'ida have been nurtured in this Wahhabi ideology. Some of them consider the Shia to be not merely heretics but apostates – and the punishment for apostasy, they say, is death.

Over the years the division has been exploited by outsiders. British colonialists in Iraq in the 1920s used an elite of Sunni army officers to suppress a Shia rebellion, paving the way for Saddam's Sunni minority rule, in which Shia clerics were regularly executed. The legacy has been that most of the 6,000 killings over the past year in Baghdad are Sunni on Shia and vice-versa. Now this ruthless sectarianism has spread to Syria.

Two major developments have triggered the escalation of tension between Sunni and Shia in recent years. The first was the Islamic revolution in Iran in 1979 when the rule of the pro-Western Shah was overthrown and replaced with a Shia theocracy with Ayatollah Khomeini at the head. Khomeini did his best to build good relations between Shia and Sunni inside Iran but other leaders, religious and secular, have since been more divisive. And Khomeini was from the outset adversarial to the Sunni aristocrats who led Saudi Arabia – calling them American lackeys as well as "unpopular and corrupt" dictators.

The Iranians and Saudis have been fighting a proxy war in the Middle East ever since.

Today in Iran, though Christian churches are tolerated, the million Sunnis in Tehran have no mosque of their own. There are no Sunnis in top government. Sunni businessmen have difficulty getting import and export licences. Huge numbers of ordinary Sunnis are unemployed. The situation in Saudi Arabia is the exact reverse, with Shia on the receiving end of the discrimination.

From time to time there are attempts to insist that the tensions between Iran and Saudi Arabia are not religious. In 2007 King Abdullah of the House of Saud met the Iranian President Mahmoud Ahmadinejad and, with public hugs, spoke of a thaw in relations between the two regional powers – and condemned those who were trying to fuel the fire of strife between Sunni and Shia.

But it changed nothing in the realpolitik. Each oil-producing giant sees the other as a huge obstacle to its national interests. Geopolitics is the reality but religious vision is the tribal badge it wears.

The invasion of Iraq instigated by George Bush and Tony Blair in 2003 was the second big factor in the deterioration of Sunni-Shia relations. Saddam Hussein led a Sunni elite which governed Iraq's Shia majority with a reign of state terror. The US had backed Saddam in Iraq's war with Iran throughout the 1980s, in which half a million troops died.

But after 9/11 the US changed its mind about Saddam, overthrew him and brought democracy to Iraq. The resulting election placed in power leaders from the Shia majority who have excluded the Sunni minority – who have responded with the car bombs which are killing thousands in Baghdad and elsewhere. Al-Qa'ida jihadists have flooded into the country to join Sunni terrorists in attacking the Shia government. And now the polarised sectarian conflict has spilled over into Syria.

When the Arab Spring reached Syria in 2011 it began as a protest against the corruption, nepotism and human rights abuses of the Assad government. But within two years the armed uprising against the regime was transformed.

Rebels motivated by political indignation, who received limited backing from Western governments, slowly became outnumbered by rebel groups with extreme Islamist motivation fighting to create what they call the Islamic State of Iraq and Syria (ISIS).

These jihadists have come from across the Islamic world but they are backed by Saudi cash. More recently Shia militants from the Lebanese paramilitary group Hezbollah have arrived to support the Alawite-led army of the Assad regime. Full-blown civil war is the result.

What all this means is that Sunni and Shia are locked in conflict all across the Shia Crescent. As each side steps up its activities, the other feels more threatened and hardens its response in turn.

Sunni-Shia tensions are increasing across the world as a result. They are on the rise in Afghanistan, Pakistan, Turkey, Kuwait, Lebanon, Bahrain, Libya, Tunisia, Malaysia, Egypt, and even in London as issues of identity, rights, interests and enfranchisement find sectarian expression.

The tensions are deep-rooted in wider economic and geopolitical concerns. But the risk – given the long history of division and tension – is that predictions of a transnational civil war between Sunni and Shia could become a self-fulfilling prophecy.