Waseem Rizvi's Campaign Against War Verses of the Quran Reformist or Sectarian?

1.    The Supreme Court rejected Waseem Rizvi's petition as frivolous and imposed a fine of Rs. 50, 000.

2.    Waseem Rizvi wrote to the PM that the Quran currently in use among the Muslims spreads hatred against non-Muslims of the country and incites violence against them.

3.    Waseem Rizvi has tried to create the impression that he has been doing all this not as a sectarian Shia activist but as an Islamic reformer.

4.    Syed Waseem Rizvi should have started a peaceful dialogue on the issue of terrorism and the use of Quranic verses by terrorist organisations

In March this year Shia leader Waseem Rizvi had filed a PIL in the Supreme Court of India seeking its order to remove 26 verses of the Quran described by him as in violation of the Constitution of India and promoting hatred between religious communities of India and terrorism in the world.

The Court in April rejected his petition as frivolous and imposed a fine of Rs. 50, 000.

But he said he would continue his efforts to 'bring reform' in Islam till his last breath. On May 29, 2021, he sent a copy of the Quran compiled by him which had Surahs re-arranged according to the sequence of their revelation and 26 war verses removed from it to the Prime Minister of India. Along with the copy of his Quran, he also wrote a letter to the PM requesting him to make arrangements for its teaching in the madrasas and in Muslim households. He told the PM through the letter that the Quran currently in use among the Muslims spreads hatred against non-Muslims of the country and incites violence against them.

Earlier in his PIL in Supreme Court he had said the same thing. He had written that the 26 war verses drove Muslim youth studying in madrasas towards terrorist organisations.

Throughout his campaign he has tried to create the impression that he has been doing all this not as a sectarian Shia activist but as an Islamic reformer. Nowhere does he use the word Shia but he uses the word non-Muslims. But is his campaign really reformist or is it driven by sectarian motives?

According to a report, in December 2019, after the central government passed the CAA and was preparing to start the process of NRC (before the launch of nationwide stir against NRC), Maulana Yasoob Abbas, spokesman of All India Shia Personal Law Board and Syed Waseem Rizvi, the then Chief of Shia Central Waqf Board had written a letter to the Home Minister Amit Shah requesting him to include Shias in the list of protected non-Muslim minorities of India along with Sikhs, Jains and Parsis. In the letter Waseem had reportedly claimed that 15% of the Shias had been persecuted by the 85% dominant Sunni community across the Muslim world ---- Syria, Iraq, Saudi Arabia, Afghanistan, Pakistan etc. --- for the last 1400 years because they did not believe in the 'controversial' caliphate but in the Imamate. 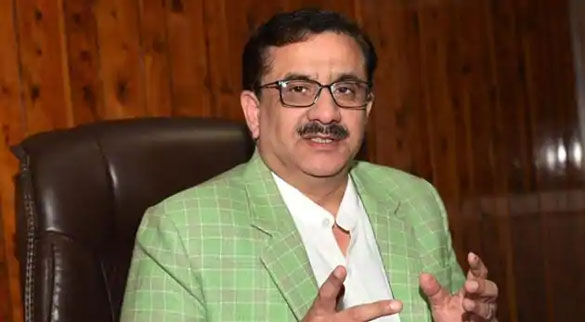 This letter shows that Waseem Rizvi, along with Maulana Yasoob Abbas, was worried not for the entire Muslim community but only for his Shia community and for this, he had declared himself and his Shia community non-Muslim and had requested the Home Ministry to consider Shias as non-Muslims for all practical purposes.

By doing so, he had ensured government protection to the Shias of India. But how could he ensure protection to the Shias of the world, of the Shias living in Sunni Muslim dominated countries where Shias are attacked, killed, victimised and persecuted by Sunni Muslim terrorist and extremist organisations like ISIS, Taliban and Sipah-e-Sahaba? These extremist and terrorist organisations regularly attack and persecute Shias in Syria, Iraq, Afghanistan and Pakistan after declaring them Kafir. During the Syrian civil war, the ISIS killed thousands of Shias including women and children and even tried to demolish their sacred places. Shias in Pakistan and Afghanistan are regularly killed by Taliban and Sipah-e-Sahaba and ISIS. Since these organisations believe in the fatwa issued by some Sunni Ulema and organisations declaring Shias Kafir, the terrorist organisations believe that the war verses in the Quran against infidels (Kafirs) also apply to Shias as they are also Kafirs. Therefore, terrorist organisations like the ISIS, Taliban, Sipah-e-Sahaba attack Shias and kill them. Since the terrorist organisations also believe ( as also some self-proclaimed moderate Ulema) in the theory of abrogation of all verses preaching reconciliation and peace with non-Muslims and in the universality of all war verses, they keep perpetrating violence against Shias and non-Muslims and to them all non-Muslims including Ahl-e-Kitab are Kafirs.

This is the point of concern for Syed Waseem Rizvi. He thinks that as long as these war verses will remain in the Quran, Shias will face persecution from the extremist sections of the Sunni Muslims. Therefore, he started the campaign against the war verses of the Quran. But he knew that if he gives his campaign a sectarian colour, the Sunnis will oppose him, and his campaign will be rejected as a sectarian move of a Shia against Sunnis and the Quran. So, he does not talk of the use of the war verses in the context of their use by terrorist organisations against Shias but against non-Muslims of India. Since many Sunni organisations and Ulema (not all) condemn terrorist violence perpetrated by the ISIS, Taliban, Boko Haram, Al Shabab and Taliban, Waseem Rizvi talks of the indoctrination of Muslim youth by terrorist organisations with the help of the war verses to rope in the support of Sunnis for his campaign against war verses. But his main concern is the persecution of Shias.

On the whole, Waseem Rizvi's anxiety over the persecution of Shias in the world and the violence perpetrated by the terrorist organisations against Shias using war time contextual verses of the Quran has compelled Waseem Rizvi to wage a war against war time verses. But in his zeal to reform the Muslim society and to fight extremism, he himself has become an extremist. He first took the extreme step of declaring himself and the Shia community non-Muslims and then went to the Supreme Court seeking removal of 26 verses of the Quran hurting the sentiments of the Muslims. Then he published his own Quran with changed sequence of Surahs and 26 verses removed from it. Muslims believe that not even a dot can be removed from the Quran.

Syed Waseem Rizvi should have started a peaceful dialogue on the issue of terrorism and the use of Quranic verses by terrorist organisations to promote terrorism and to indoctrinate youth. He should have held national and international seminars on the ways to fight terrorism and sectarianism and tried to create a consensus on the issue. If he had done this he would have achieved a greater success in preventing violence against Shias and non-Muslims in the name of Islam.