Row Over the Muharram Circular in UP: Showcasing Sectarian Unity Is Admirable But Too Ambitious, Too Gigantic A Task To Achieve

Can Deobandis and Barelvis Come Closer To Each Other and Bring Shias and Sunnis Together?

1.  The Circular on Muharram curbs in Uttar Pradesh has sparked a massive row in the Shia community in India.

2.  The Circular contains sensitive information about the Shia-Sunni discord and even the disagreements among the Ahl-e-Hadith, Deobandis, Barelwis and Sufis.

3.   Shias particularly object to the word ‘festival’ used in the notification letter issued by the DGP office. Muharram is a ‘mourning’ not a festival….

4.  Young Islamic scholars especially from the Sunni-Sufi tradition are trying to fight against the sectarian disunity in the community particularly from a theological point of view.

5.  In view of the profound sectarianism in the Muslim community in India, forging sectarian unity is timely and admirable but it is too ambitious and too gigantic a task to achieve. Here’s why! 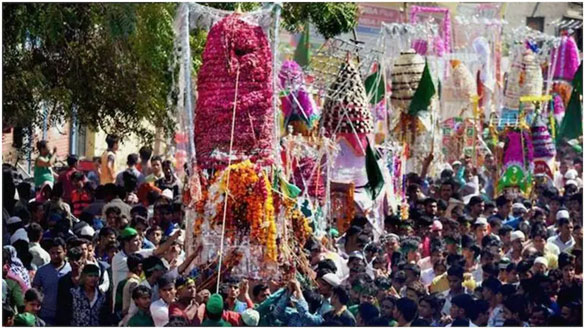 Due to the Covid-19 protocols, some curbs have been imposed in Uttar Pradesh on the Ta’aziya processions during the forthcoming Islamic month of Muharram-ul-Haram. But this order from the UP government has sparked a massive row in the Shia community. Part of the reason is that the circular contains some sensitive information about the Shia-Sunni discord and even the deep disagreements among the Ahl-e-Hadith, Deobandis, Barelwis and Sufis regarding the procession of Muharram. One of the points in the circular goes like this:

These lines are what the Shia clerics have strenuously objected to. Not only the Shia community, even several Sunni Ulema are accusing the UP government of digging up old graves. Shia clerics like Maulana Kalbe Jawad, General secretary of Majlis-e-Ulama-e-Hind, Kalbe Sibtain Noori, All India Muslim Personal Law Board, Maulana Saif Abbas president of Shia Markazi Chand Committee have accused UPDGP for inciting Shia-Sunni conflicts. They have particularly objected to the word ‘festival’ used in the notification letter issued by the DGP office. Muharram is a mourning not a festival, they say. Condemnations of this circular galore from various parts of the country. All India Shia-Sunni Front and the Shia Personal Law Board have called out and continue to hold virtual and physical public demonstrations.

Urdu daily, Inqilab’s regional editor, Shakeel Shamsi, who himself comes from a Shia family background, has written a scathing editorial, titled, “Musalmanon Mein Phoot Dalne Ki Koshish”. He writes that after Waseem Rizvi has failed in enraging sectarian tensions between Sunnis and Shias, now the UP police’s circular on Muharram comes as yet another such attempt to create disunity among Muslims. He avers that there have hardly been Shia-Sunni tensions in UP during the Muharram processions except in some pockets like in Lucknow and Mubarakpur of Azamgarh. But the questions are being raised on the intent behind the state police being told about the sectarian differences explaining as to why only Shias and Sufis take out T’aziya processions, while the Deobandis and Ahl-e-Hadith strongly object to this age-old practice especially in UP and Bihar. It’s noteworthy that Shia-Sunni riots took place on a large scale in Lucknow during the early 80s. But later they started living in harmony and unity after the Shah Bano Case and Ayodhya issue. There was a peace agreement between the two sects in 1997.

The community leaders, clerics and Sunni and Shia Qazis like those under the banner of Kul-Hind Jam’iat-ul-A’wam in Kanpur are questioning as to why this circular has contained some information which incites sectarianism, especially at a time when the Muslim leadership especially in Lucknow and Kanpur are trying to maintain sectarian unity among Muslims. Recalling an incident which took place some forty or fifty years ago would cause more disruption and disunity, they believe.

In this context, it would be pertinent to mention and highlight how some young Islamic scholars especially from the Sunni-Sufi tradition are trying to fight against the sectarian disunity in the community particularly from a theological point of view.

One such intellectual endeavour is being made by Maulana Zishan Misbahi, young Islamic theologian associated with the Sufi seminary in Allahabad, Jamia A’arifia Syed Sarawan who also edits an annual journal on Sufism “Al-Ihsan” and has recently authored an interesting book in Urdu titled, “Mas’ala-e-Takfeer-o-Mutakallimin” (The issue of Takfeer and perspective of Scholastic Theologians). The book deals with the intricate and subtle issues of excommunicating Muslims and has been exclusively published on New Age Islam.

Maulana Zishan Misbahi in this book seeks to explore and offer ideological basis to refute ‘aggressive’ or ‘excessive’ Takfirism (غلو فی التکفیر) and shows the way forward for the Indian Muslim community to eschew the destructive Takfiri Zahniyat and forge sectarian unity especially between the Sunni sub-groups like Deobandis and Barelwis. Quoting extensively from the classical Islamic scholarship and the authoritative theologians such as Imam Abu Hanifa, Allama Ibn Abedin Shami and Imam Ghazali especially his book Faysal al Tafriqa (On the Boundaries of Theological Tolerance in Islam), Maulana Misbahi substantiates the traditional position on Takfir (excommunication of someone from Islam) which is more considerate and careful than the dialectic and paradoxical term as in understanding of extremist ideologues or terrorist organisations like the Harkat al-Takfir Wal-Mahjara and  Daesh (ISIS). In his conclusive remarks, he writes:

“Of course, the word Kafir or non-believer is an absolute religious term with its applications in the Islamic parlance. The term applies to those who do not believe in one God. In this sense, all the monotheists of the world are believers and non-kafirs”.

The above definition of Kafir is indeed much safer and innocuous than the various misleading interpretations of the term which create sectarian tensions and communal conflicts. However, it saves only those who believe in Monotheism which is intrinsic to the Semitic faith traditions. This is the position of the traditional Sunni ‘ulema known as Sawad-e-A’azam in South Asia. But what about those who believe in the concept of Deism? A wide swath of educated Muslim youth and new generations in Muslim countries like Turkey tend to believe it. Deism rejects the hereafter (A’akhirat), heaven and hell, the angels (Malaika), and resurrection (Hashr-o-Nashr). These are all basic postulates of the traditional Sunni and Shia Islam. But Deism only accepts the existence of the Divine. According to the Deist philosophy, Allah, after it has created the Universe, does not intervene in what has been created. Many young Turks are sliding towards Deism according to a BBC news report. This poses theological challenges to the work of traditionalist Ulema like Maulana Zishan Misbahi. He perhaps hints at the modernist Islamic thinkers who are seeking to open doors for the non-monotheists as he writes: “There is no doubt that the application of Kafir (infidel) in principle is for non-believers and it is equally valid for the Mulhids (atheists) as well as all non-Muslims. But some modernists are trying to do something new because of their temporalist orientation or lack of religious determination”.

Nevertheless, small paragraphs such as the above are not sufficient to address the intriguing questions of modern Muslim youth like those turning towards Deism in Turkey. In view of the profound sectarianism in the Muslim community in India, however, his book has come out reasonably well with an alternative perspective and a scholarly debate and critical analysis of the issue of Takfir.

Another active Islamic theologian in India who is painstakingly engaged in mitigating sectarian disunity, bringing about an intellectual churn in the Ulema community and reforms especially in the Madrasas, is Dr. Waris Mazhari, a distinguished scholar from Darul Uloom Deoband. He wrote an interesting piece which was also reproduced in Urdu section of New Age Islam under the title “Takfir and Its Implications. Source: http://www.newageislam.com/urdu-section/takfir-and-its-implications-/d/7208

Dr. Waris Mazhari has quoted pre-eminent Ulema of Deoband such as Maulana Hussain Ahmad Madani and his book Naqush-e-Hayat and Maulana Rashid Ahmad Gangohi and his work Anwar-ul-Qulub in which their position on Takfir is this: “Even if there are 99 reasons in favour of Takfir, and only one against it, no one among the People of Qiblah [Ahl-e-Qiblah] will be declared Kafir. This is precisely what has been narrated from Imam Abu Hanifa and Mullah Ali Qari in Sharah Fiqh al-Akbar—one of the earliest texts written on Islamic creed and the surviving work of Abu Hanifa, the eponymous founder of the Hanafi school of Sunni jurisprudence.

“Despite this position, some important Deobandi scholars made grave mistakes in this regard. As a result, even important Ulema like Maulana Hameed-ud-Din Farahi and Maulana Shibli Nomani could not escape the fatwa of Takfir. As far as the Barelvi school of thought is concerned, they openly excommunicate all Deobandis and the entire Ahl-e-Hadith community. In Fatawa Razawiya, it is stated that “one who has even a doubt about the Deobandis being Kafirs, is also a Kafir ''.

Sectarian tensions between the Barelvis and Deobandis or on an extended level among the Sunnis and Shias, are not just confined to the ritualistic practices such as Ta’aziya processions during Muharram. But rather, there deeper ideological conflicts which pose serious challenges to Muslims in the Indian subcontinent.

These ideological disagreements have torn apart the ‘Islamic Ummah’ from within. A group of serious scholars and well-intentioned thinkers like Dr. Waris Mazhari or Maulana Zishan Misbahi have always tried to somehow try to reduce the severity of these conflicts. But the question is whether some concerted efforts would be made by the leadership of Deoband and Bareilly to bridge the sectarian gap. Can these two sub-groups within the Ahl-e-Sunnat (Sunnis) come closer to each other before making too ambitious claims to bring Shias and Sunnis together? At a time when the Ulema are speaking so well of the need for interfaith dialogues between Muslims and non-Muslims, Islam and the West, the question is, why not try to fix our own problems first?