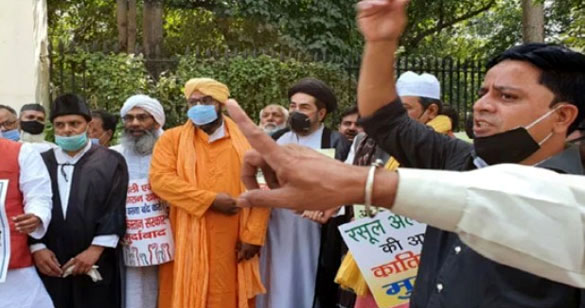 The one sided battle of Karbala between Imam Hussayn r.a. and Yazid was fought on 10th October 680 in the deserts of Karbala, 100 km from Baghdad. Imam Hussayn, the grandson of Prophet Mohammad pbuh and his 71 companions and relatives were martyred by the army of Yazeed.

At the time of the battle, the governor of Kufa under which Karbala fell was Ubaidullah ibn Ziyad. Under his direct supervision the battle of Karbala was fought. But he had got full authority from the 'caliph' Yazid to get allegiance of Hussayn by any means because Yazid considered Imam Hussayn r.a. and Hadhrat Zubair ibn Awam r.a. grave threat to his political career. 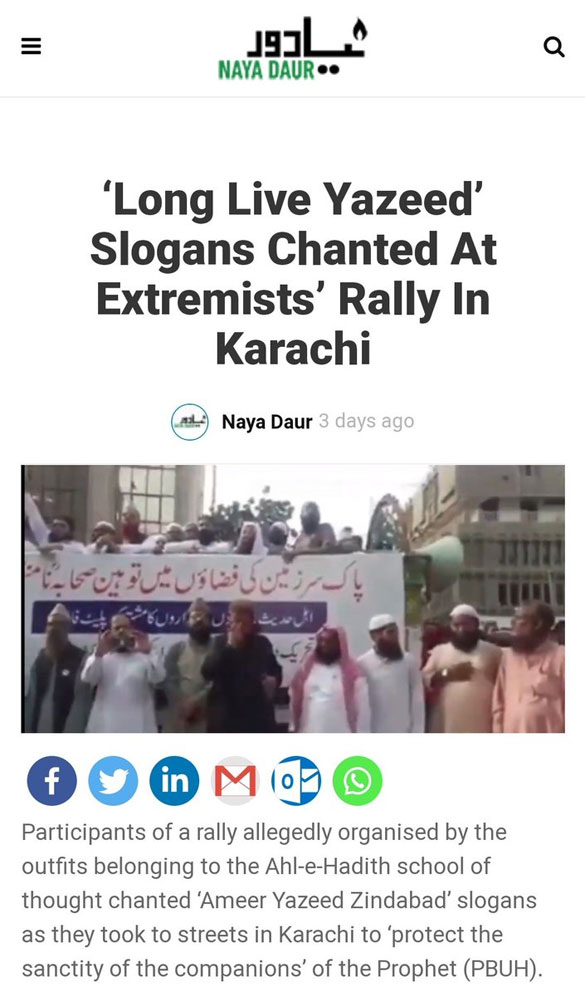 They arrived in Kufa on 13th Muharram. From there, they were taken to Damascus in Syria to the court of Yazeed. The journey took about 15 days. Before the arrival of Ahl-e-Bayt to Damascus, the city was decorated at the order of Yazid as a mark of celebration of his victory. The people of Damascus, misled by the constant propaganda by Yazeed against the Ahl-e-Bayt and Imam Hussain expressed joy at the arrival of the 'vanquished' Ahl-e-Bayt and expressed solidarity with Yazid.

The captives were first stationed at a Chabootra (raised platform) near the mosque while Yazid ordered decoration of the palace. The elite of the city were invited to the palace. After that Yazid ordered the army to bring the Ahl-e-Bayt to the court.

They were brought to the court as captives tied with one another by ropes. Yazid did not show any respect either to the severed head of Imam Hussayn r.a. or to Hadhrat Zaynab r.a. and other women of the holy family. To the contrary, he showed disrespect to Imam Hussayn and his family. After some altercation, Yazid ordered that they should be kept imprisoned in a dilapidated building without roof for about 7 days. From there they were freed and returned to Madina, which took them almost a month.

In the whole tragedy, Yazid is the main antagonist at whose orders the assassination of Imam Hussayn r.a. happened and at whose orders the women and minor children of the holy family were held captives and were humiliated. Yazeed did not show any remorse to the Ahl-e-Bayt. They were subjected to hardships and insults and were forced to travel for about twenty days on bare backs of camels. In the palace of Yazeed, they were not hosted respectfully but were kept at a dilapidated and unhospitable place.

All this has been recorded in the pages of history and it is well known that all this happened under the direct orders of Yazeed. But some Sunni Ulema of Pakistan this year brought processions in Muharram and shouted slogans in favour of Yazeed. They chanted slogans like "Amir Yazeed Zindabad" which hurt the religious sentiments not only of Shia Muslims but also of the Sunni Muslims of the world. The Sunni Muslims of India even condemned this bizarre and unjustified act of the Ulema of Pakistan. Even general Sunni Muslims are flabbergasted at this show of support for the killer of the holy family of the Prophet pbuh. Till now, these Sunni Ulema defended Amir Muawiyah on the ground that he did not have any hand in the assassination of Imam Hussayn and that he was a Sahabi (companion of the Prophet pbuh) and a Katib-E-Wahi (recorder of revelations). But now they have gone one step further and have started openly defending Yazeed and absolving him of the blame of Imam Hussain’s martyrdom, putting all the blame on the governor of Kufa Ibn-e-Ziyad.

The governor could not have ordered the killing of an important personality like Imam Hussayn without the power of attorney vested in him by Yazeed.

Hadhrat Hussayn did not support and pay allegiance to Yazeed because Yazeed was not a pious Muslim and did not deserve the caliphate. How can the followers of Imam Hussayn support Yazid? Hadhrat Imam was killed only because he did not accept him as his Amir (Khalifa) but the Sunni Ulema of Pakistan call Yazeed their Amir (Khalifa). Are they really Sunni Muslims or Khwarij to distort the image of Islam? These so-called Sunni Ulema cite a couple of hadiths supporting Yazid. If that was true, was not Imam Hussayn aware of these hadiths?

Supporting and eulogising of Yazid and absolving him of the killing of Imam Hussayn and his family members and compatriots and insulting of the women of Ahl-e-Bayt by Yazeed can never be supported or defended by a true Muslim. It is the biggest crime in the eyes of God and the holy Prophet pbuh. It only speaks of the ideological bankruptcy of the Sunni ulema of Pakistan. This is the highest degree of blasphemy against the holy prophet pbuh, against Imam Hussayn r.a. and against the holy women of the family of the Prophet pbuh.