The Malaysian 'Allah' Ban Is About Putting Minorities in Their Place

"Allah" means God, unless you are a non-Muslim Malaysian, in which case you have to find another word. After a recent court ruling in the country, Allah can now be used only to refer to the Muslim God, and non-Muslims (mainly the Malaysian Christian Catholic community and press) have been banned from using it. It is a decision that has inflamed opinion among minority religions and disheartened Muslims. Apart from all the practical implications of this (re-printing Bibles and so on), there are other intangible but more heartfelt grievances. At first glance it looks like a petty scuffle over semantics, but the roots of the dispute go deep into the issue of national identity. 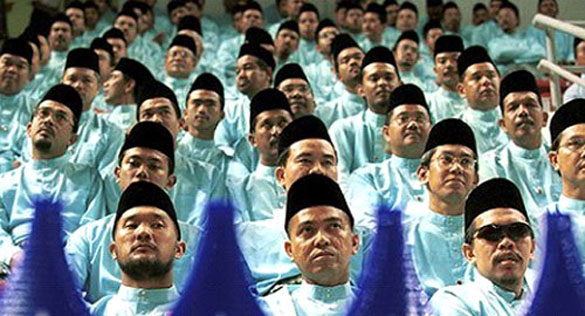 'This cynical, politically motivated ban, and not everyone using the same name for God, is the real threat to Islam.' Photograph: Teh Eng Koon/AP

The ruling was flimsily justified by the "risk" of conversion. Announcing the change, the judge said: "It is my judgment that the possible and most probable threat to Islam, in the context of this country, is the propagation of other religions to the followers of Islam." But the ban is less about religion than about putting non-Malay minorities in their place, subordinating their status to that of Muslims, the majority population.

The issue is made more complex by the fact that "Allah" is an Arabic loan-word and, when imported into other languages, can come to be thought of as a proper noun. On my first day at a British school, a teacher going around the class and asked us what our respective non-Christian gods were called. When I floundered, she exasperatedly told me that my god was called Allah, and I couldn't quite explain to her why that felt wrong. To me, Allah just meant "God" in Arabic. It wasn't a name.

The Shahadah, the Muslim declaration of faith, is often translated as "There is no god but God" – but the literal and more accurate translation is "There is no God but the God". Allah means, simply, God with the definite article in front of it. It is not a name, like Vishnu, or a title, like Buddha. It is also pre-Islamic, pre-Abrahamic even, having originated at a time when it referred to a chief god among many.

There is not much controversy about the usage or interchangeability of the word Allah with other words for God in Arab countries where there is a similar Muslim majority. But that is simply because everyone speaks Arabic, and so there is clearer understanding of the literal meaning of the word, making it harder to imbue with sectarianism. In that context a ban would be as ridiculous as the UK passing a law saying that "God" was a Christian designation, and therefore other religions had to find their own words for their own deities.

The Malaysian ban follows a depressingly familiar pattern of using religion as a pretext for promoting the status of the majority ethnic group and thereby monopolising the national character. The anger expressed by non-Muslims in Malaysia since the ruling and their insistence on being able to continue to use the word Allah do not constitute an aggressive encroachment on some hallowed Muslim space. It is a re-assertion of a pluralistic national identity and of a determination to use a word that is Malay, rather than Muslim.

The paradox of all this is that to be possessive of the word Allah betrays the sense of unity – Tawheed – that the term embodies, and that is at the heart of monotheism. It creates separate gods for separate religions, and directly contradicts the message of the prophet Muhammad. But perhaps that is the point of what must be a cynical, politically motivated ban. This, and not everyone using the same name for God, is the real "possible and most probable" threat to Islam.