The past few days have proven themselves to be a turbulent period for Pakistani cyber-mujahedeen, which started with the emergence of an extremely indecent, indecorous and utterly gross trend on Twitter – “#EkCrorePakistanMulhid”. Just listening to the name of the trend gave one’s nerves and heart a violent twist, and a cursory read made one desire an ablution to regain purity. 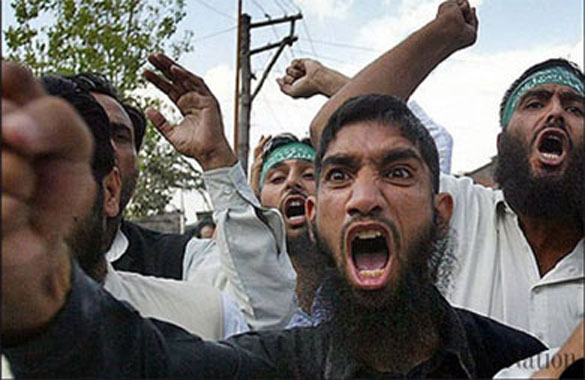 The topic of the trend was improper, unfitting, rude, filthy, wicked and demeaning – extremely unbecoming of an Islamic Republic. It all seemed to be a carefully crafted and engineered plan, aimed at misleading Twitteratis (and others) and stripping Pakistanis of what’s left of their repute.

A bunch of deluded, disgustingly filthy-minded individuals enjoyed it and subscribed to this claim as credible. Others detested it and refused to acknowledge the presence of a single Mulhid (i.e. apostate) in Pakistan. Their incredulity, unlike the ecstasy of the deluded souls, had some reason behind it: how could there be 10 million apostates in a country where people get killed for being “half-Muslims”, let alone renouncing the religion altogether? Moreover, apostates are liable to be punished with death (theoretically; sometimes practically, too). #EkCrorePakistaniMulhid must then be a farce in totality.

Nevertheless, this “farce” managed to do what many an ugly reality could not achieve: Pakistanis, the people who are silent spectators to loathsome acts like brutal mass murders, went ahead and took to streets to protest against the twitter hashtag.

‘Alright. We, the Sunnis, may call Shias and Ahmadis “Kafir” and they might return the favour with the utmost generosity – which makes us all Kafir – but that is up to us, and only us,’ argued one of the anti-Mulhid protestors, ‘We, alone, are eligible to play the game of ''You Kafir! You Kāfir!''. This blame-game is exclusively ours. We cannot give this liberty to anyone else. It just isn't right,’

Not everything comes without consequences. The Twitter trend’s immediate effects mushroomed as soon as it gained momentum. Apart from a major out-break of constipation (among the doubters), these effects were: indigestion, dyspepsia, belly-ache and every other form of abdominal disease that can be incurred by cyber-trauma of enhanced proportions. The number of retweets earned by the said hashtag was directly proportional to the demand for laxatives – it was learnt.

A day later, another cyber-bomb was dropped on Pakistani cyber-mujahedeen. This time, the trend of “#SecularPakistan” became the talk of the town among the Pakistani Twitteratis. The new trend added fuel to the already-raging fire set alight by #EkCrorePakistaniMulhid. It was like adding salt to constipation. What further rubbed it in was the fact that the mild shortage of evacuants turned acute. Due to the severe shortage of emetics, the anti-Secularism/apostasy brigade was prescribed Dam-Darood and Taweez-Ganda as alternative medicines.

This time, it wasn't expected. It wasn't anticipated. It was a surprise attack. And this is exactly where the anti-Mulhids group became convinced of the involvement of a ''foreign hand''.

Now the problem became three-pronged: 1. Rise of Mulhids (a source of defamation if untrue) 2. Rise of Secularism 3. Well, you already know this one.

''This is outrageous. In all fiction and non-fiction and the corpse of English words available online and otherwise, these propagandists could only get their hands on this… this… I hate to say it, but this loathsome and sickening word, ‘Secular’,'' commented one bearded erstwhile-demonstrator who now happened to be in line, waiting for his medicines, with a nauseated look on his face.

Another man, a mosque-businessman, lamented at length: ''See. Don't lecture me on the separation of politics and religion. We know that. We know you will say it brings prosperity, fosters mutual respect, prevents parochial behaviours, promotes equality and removes the impediments in scientific progress, blah blah blah. What you don't understand is that it hurts mosque-economy and faith-based business. It will render a large number of uneducated and illiterate people unemployed, who are trained for absolutely nothing. It will make our religious leaders irrelevant who up until now have been successfully pretending to be relevant. It’s all bad, man. It’s really, really bad.'' His cohorts continued to nod in approval.

When asked about the future course of action to counter the rise of secularism and apostasy was, a comparatively less witless commentator responded: “They think our stupidity is infinite. Well, we are going to surprise them. Like everything else, it also has a limit. We were stupid to ask for a ban on YouTube. We won't recommit the mistake this time by asking the PTA to ban Twitter. That is a temporary solution. We are looking for something big. May be you can call it ‘Oil Big’.”

In a final “Statement of Intent”, the hashtag protestors requested the super-rich Saudi King Salman to take over Twitter and urged him to put the social-media outlet to good use – i.e. to the use of the Muslim Ummah. They urged the Khadim-al-Harmain-Shareefain to take control of Twitter and make the following hashtags trend perpetually:-

''It won't be Twitter anymore. It will be Islamic Twitter, with Islamic trends! This is the only way they can get a taste of their own poison... Cheers! Oops! I mean, Insha Allah...! '' Concluded one protestor brimming with excitement while reciting the cyber-Jihadi hashtags on his fingertips.

Muhammad Adil is a student of LL.B at Law college, University of Peshawar .