Sitting in the living room of his home in Erbil, capital of the Iraqi Kurdistan region, 63-year-old Rostom Sefarian stops talking, struggling to hold back the tears. It was July 2006 and Sefarian, an Armenian Christian living in the northern Iraqi city of Mosul, had been kidnapped by a group of Islamic fundamentalists — the latest victim in a series of abductions and killings of Iraqi Christians that continues to this day. 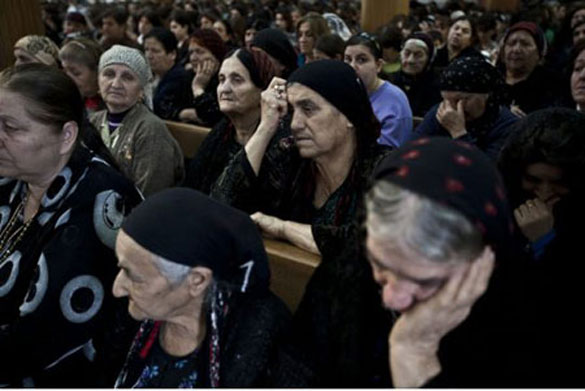 Sefarian was released five days later, when his family agreed to pay a $72,000 (U.S.) ransom. It was the second time Sefarian had been kidnapped; his family paid $12,000 to free him after one day in captivity the previous January. His wife’s cousin, also a Christian, was not as lucky: three days after being kidnapped, he was found dead by his family.

“In the rest of Iraq they are killing us with guns; here they are doing it with money.”

Sefarian is one of the 35,000 Christian refugees from across Iraq who have found shelter in Kurdistan, the autonomous north-eastern part of the country and its only stable region.

But what was once a safe haven for Christians is rapidly turning into the departure point for tens of thousands who feel they don’t have a future in their own country. Hampered by a lack of economic opportunity, linguistic and cultural barriers, and with no proper political protection, more and more Christians are now abandoning Kurdistan — and Iraq.

The Iraqi Christian population has shrunk to between 300,000 and 500,000, down from a high of 1.3 million people in 1991, according to recent estimates, raising fears about the possible extinction of one of the most ancient Christian communities in the world.

A recent report by the International Organization for Migration (IOM) shows that the number of displaced Christian families in the four northern governorates of Iraq (three of which are in Kurdistan) has decreased from 1,350 to fewer than 500 in 2011. Meanwhile, the same year, the UN High Commissioner for Refugees in neighbouring Turkey recorded an increase in Iraqi refugees, half of them (around 1,700) Christians.

“We are the weakest link in the Iraqi mosaic,” says Keldo Ramzi, the Christian secretary of the Chaldo-Assyrian Youth Union in Erbil. “If anyone wants to send a message to the USA, he targets Christians or bomb churches.”

The worst attack happened in October 2010, when a series of suicide bombings hit the Our Lady of Salvation Church in Baghdad, killing 58 people. According to a recent report published by the Assyrian International News Agency, 71 churches have been attacked or bombed in Iraq since 2004.

But a series of attacks against Christian properties by Islamists and arsonists in Kurdistan was reported by the IOM at the end of 2011. And even if Christians can profess their faith in relative safety here, many, like Sefarian, claim their civil and economic rights are not respected.

After selling his four-storey house in Mosul in August 2006, Sefarian moved with his wife and son to Erbil, where he now rents a small apartment in Ankawa, a Christian enclave in the outskirts of the city.

But without a pension or other forms of assistance from the Iraqi government, Sefarian is forced to rely on his son’s wage. “In Mosul, I was living like a king,” he says. In Erbil he has to renew his residence permit every year, a procedure that takes time and money. “I can’t find a job at my age. I don’t speak (Kurdish) and don’t have any means to survive.”

While the region has registered an impressive economic boom driven by oil since the U.S.-led invasion in 2003, many Christians claim to have experienced only the worst part of it. Houses in Ankawa have been sold to Muslims, contravening a “gentlemen’s agreement” that Christian politicians say was reached with the KRG to preserve the area’s Christian identity.

“They are building a few very expensive apartment towers that nobody here will be able to afford,” claims Naurad Youssif, a 41-year-old Christian from Ankawa working at the local post office. “Christians here are a poor community, and those apartments will not be for us.”

Taking advantage of the Christian nature of the area, nightclubs and restaurants selling alcohol have opened, attracting people from all over the city and bringing problems such as brawls and prostitution.

“Many of the prostitutes here are girls coming from other parts of Iraq, with no jobs or opportunities,” says Father Tariq Eissa, parish priest at the local Saint George Chaldean Catholic Church. “We understand their problems, but we are not happy about the situation.”

Eissa says Christian land has been seized by the government to build business towers and housing complexes around Erbil and Ankawa. “In the rest of Iraq they are killing us with guns, here they are doing it with money.”

The project, which would create a Christian enclave in an oil-rich area whose control is still contested between the Kurdistan region and the Iraqi central government, has been already rejected by many Christians.

“It’s a project the Catholic Church has always opposed,” says 43-year-old Afnan de Jesus, an Arab Chaldean nun originally from Mosul who converted to Christianity. “I think it would be very dangerous to live just among ourselves, isolated from the others.”

Yet, if the majority of local Christians seem resigned to choose between a life in exile and an uncomfortable existence here as second-class citizens, a young and active wing of the Christian population is trying to fight this passive mentality. Globalized and English-speaking, many Christian youngsters are employed by foreign companies working in Kurdistan. They are aware of their rights and are willing to keep on living in Iraq, no matter what.

To do so, they are ready to break the circle between religion and politics that, in their opinions, has created so many problems. “If we reclaim our rights under the name of Christianity we will be very weak, because churches cannot interfere with governments,” says Savina Rafael Daoud, a 22-year-old Assyrian from Ankawa.

Taking advantage of the good relationship between Kurds and Christians, some youngsters are willing to open up and engage the local society. “Christians are not very brave here. Yes, there are problems to solve, but this doesn’t mean we should leave this country,” explains Salim Kako, an Assyrian politician. “We cannot look for the shadow all our life. We have to go under the sun and fight for our rights.”