Farahnaz Ispahani: Atrocities on Minorities in Pakistan Were One of the Worst in the World, and Blasphemy Laws Were Used Against Non-Muslims as Instruments of Repression 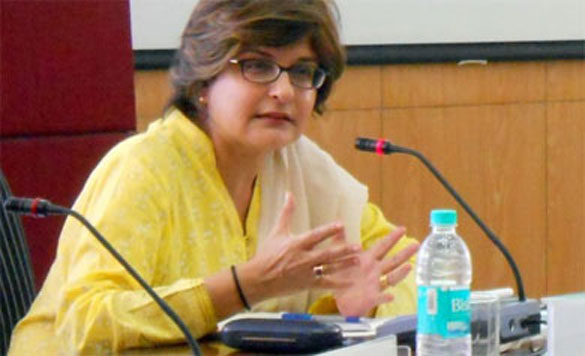 Farahnaz Ispahani is a former member of the National Assembly of Pakistan and Media Advisor to President Asif Ali Zardari.

Speaking about how and where things had gone wrong with Pakistan despite it having a wonderful Constitution that guaranteed rights to each individual on the basis of citizenship, Ms Ispahani said that there were broadly four stages in which a particular religious identity was created which led to serious problems in the country. She described those stages as ‘Muslimization,’ Islamic identity, Islamization and militant hostility. Speaking about the first stage she said that the Muslimization of Pakistan led to drastic reduction in minority population.

As far as the issue of Islamic identity is concerned, Ispahani, an advocate of women and minority rights, traced it to the passing of the Objective Resolution of 1949 whereby minorities were treated as Dhimmis, people who need to pay certain amount of tax for their security while living in an Islamic state. According to her this laid the foundations for an “Islamic State”.

Ispahani, a former Public Policy Scholar of the Woodrow Wilson International Centre for Scholars, Washington D.C., said that in his process of Islamisation, General Zia-ul-Haq (1978-88) made Constitutional changes which further alienated the minorities, otherwise, Pakistani Constitution’s Preamble was as beautiful as India’s.

Ms Ispahani, who has been associated with the Pakistan People’s Party (PPP), said that some wrong choices were made at the very outset.

In an answer to the question, what led to the failure to implement the vision of its founder, Muhammad Ali Jinnah, she said that Pakistan did not have the good fortune of leaders like Pt. Jawaharlal Nehru and others who gave their blood, sweat and tears.

Jinnah died shortly after partition and there was no leader of his stature to carry his vision.

Although there are other Islamic states in the world but in the case of Pakistan, after it being declared an Islamic state, she said, the question was “Who is a Muslim in an Islamic State?” Such branding of Islam led to anti-Shia campaigns, the passing of Hudood Ordinances and Blasphemy Laws because of which the Ahmadis were declared non-Muslims through constitutional amendment in 1974.

She said that atrocities on minorities in Pakistan were one of the worst in the world, and blasphemy laws were used against non-Muslims as instruments of repression and suppression in almost 99.9 percent of the cases. False blasphemy cases, changes in school curricula, attacks on places of worship, terrorist attacks, kidnappings and forced marriages were used as part of what she termed “militant hostility”.

While answering a question about her party’s role in annulling those harsh laws, she said that PPP government tried to revoke some of these laws but it had to face serous socio-religious and political challenges and some of its leaders had to pay as a heavy price as losing their life in that process.

About the future of minorities in Pakistan, she suggested to follow the Quid-e-Azam’s ideal of keeping religion out of the business of State and adhere to Human Rights norms that can save the country’s minorities in the 21st century.

Despite obstacles, there is a silver lining and that, she said, is “the growing number of progressive and pluralist Muslims and some “great human beings” who despite being embattled, are “standing for the rights of minority groups, both non-Muslim and Muslim.”