Silence Is Deafening As Attacks on Christians Continue To Grow

The sights, sounds and scents of Jerusalem are kaleidoscopic and ever changing. When I first arrived in Israel in 2006, I realized that it would take a lifetime to see and appreciate the endless array of cityscapes, holy sites, museums, gardens, archeological digs and – most wonderful of all – the colorful people that surrounded me. 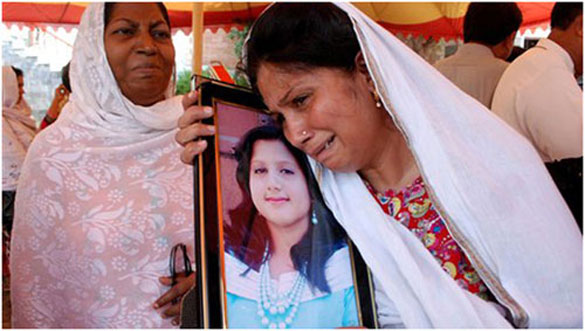 A Pakistani Christian mother holds a picture of her daughter, who lost her life in a suicide bombing of the All Saints Church in the northwestern city of Peshawar, Pakistan. Pakistani Christians denounced the deadliest attack ever in this country against members of their faith when a pair of suicide bombers blew themselves up amid hundreds of worshippers outside a historic church in northwestern Pakistan on Sunday, Sept. 22, 2013. (AP PHOTO/MOHAMMAD SAJJAD)

I suppose that’s why I wasn’t all that impressed at the sight of some ugly, spray-painted graffiti a friend pointed out to me in Bethlehem. “It’s Arabic,” she explained. “And it means, ‘First comes Saturday, then comes Sunday.’”

That was outrageous. But like a lot of new things, it was soon eclipsed by other discoveries. In fact, I forgot about it altogether till I attended IDC’s Herzliya Conference in 2009 – an annual policy and strategy gathering. That year, I wandered into a panel discussion about something I’d never heard of –  “The Forgotten Refugees.”

I was bewildered watching panelists and participants, who were speaking with great emotion about Jews – often themselves and their families – who fled Muslim lands between 1948 and 1970. What were they talking about?

Short version: after seeing their friends and loved ones imprisoned, tortured and sometimes killed, 850,000 Jews left behind their homes and millennia of history with nothing but the shirts on their backs. Many are now in Israel.

But it wasn’t until I actually began to research the story of those “Forgotten Refugees” that I began to understand the slogan: “On Saturday we kill the Jews.” Why? Because with virtually no Jews left to persecute in those Muslim countries, “On Sunday we kill the Christians.”

Since 2003, more than half of Iraq’s Christian population of 800,000 has fled. One horrific church bombing October 31, 2010, killing 58, made the news. But there was much more. As international human rights lawyer Nina Shea testified in a Congressional hearing:

“…In August 2004…five churches were bombed in Baghdad and Mosul.  On a single day in July 2009, seven churches were bombed in Baghdad…The Archbishop of Mosul, was kidnapped and killed in early 2008.  A bus convoy of Christian students was violently assaulted. Christians…have been raped, tortured, kidnapped, beheaded, and evicted from their homes…”

In recent months, the Christians have been blamed for the demise of the Muslim Brotherhood’s regime.

In the span of just three days, between August 14 and 16, 38 Churches were destroyed; 23 were vandalized. Fifty-eight Coptic homes were burned and looted. Eighty-five Copt-owned shops, 16 pharmacies and 3 hotels were demolished. Six Christians were killed; seven Copts were kidnapped.

Now hundreds of thousands of Syrian Christians have fled; others are bleeding and dying, often targeted by Al Qaeda-affiliated rebels who demand that they convert to Islam or die.

And elsewhere? Just this past Saturday, a massacre in a Nairobi mall took the lives of 68 people. Their al-Shabab killers ordered all Muslims to safely leave the scene; they shot the rest.

On Sunday, more than 80 Pakistani Christians were killed in a church bombing.

Jewish friends, neighbors and colleagues are shocked but not entirely surprised by such stories. They are rather puzzled, however, by what appears to be a lack of anxiety, action or advocacy on the part of Western Christians.

If we Sunday people are indeed concerned about the survival of our ancient communities in the Middle East, we may want to heed the advice of the Saturday people:

Lela Gilbert is author of "Saturday People, Sunday People: Israel through the Eyes of a Christian Sojourner” and co-author, with Nina Shea and Paul Marshall, of "Persecuted: The Global Assault on Christians."  She is an adjunct fellow at the Hudson Institute and lives in Jerusalem.