Pakistan's Blasphemy Laws Are a Death Sentence for Religious Minorities

The elderly man's troubles started when two young men milling inside his homeopathic clinic casually asked him about his religion. He thought they were merely curious. In fact, they belonged to an outlawed militant group and were carrying hidden tape recorders.

Within hours, police officers showed up at Masood Ahmad's clinic and played back the tape in which he explained the tenets of the minority Ahmadiyya sect, rejected by mainstream Muslims because it disputes the basic tenet of their faith that Muhammad is Islam's last prophet. 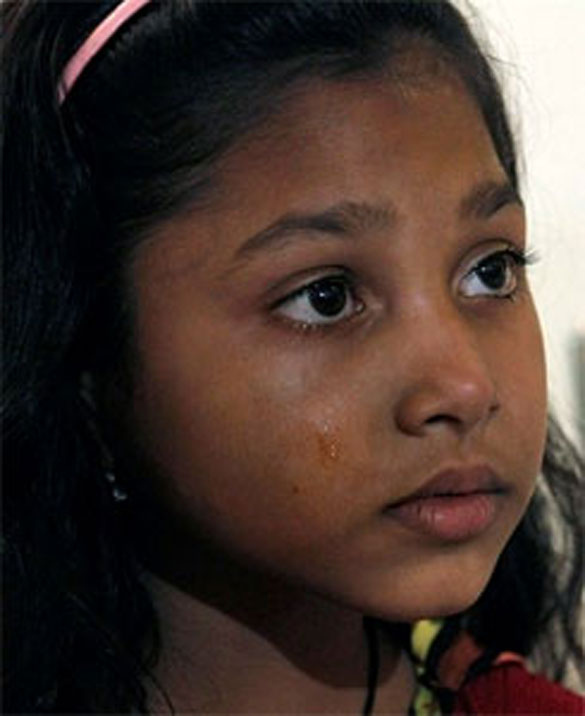 In this Friday, Jan. 10, 2014 photo, Pakistani Christian girl, Zaira, 6, whose mother and father were arrested on charges of sending text messages that insulted Islam's Prophet, cries during an interview with The Associated Press, in Lahore. Pakistan’s blasphemy law has become a potent weapon in the arsenal of Muslim extremists, who use it against adherents of minority religions. (AP Photo/Anjum Naveed)

Ahmad, who returned from Britain to his Pakistani homeland decades ago to open the clinic, was charged with blasphemy — which can carry the death penalty. The 72 year old has been jailed since his arrest this month, awaiting a trial that could take months or even years to begin.

He is not alone. Just last week, a Pakistani court sentenced a mentally ill British man, Mohammad Asghar, to death on blasphemy charges after he allegedly claimed to be Islam's prophet.

Pakistan's blasphemy law is increasingly becoming a potent weapon in the arsenal of Muslim extremists. Although Pakistan has never executed anybody under the law, vigilantes frequently entrap and sometimes kill adherents of minority religions accused of blasphemy. They have created a climate of fear, forcing frightened judges into holding court sessions inside jails and keeping witnesses from coming to the defense of those on trial.

"At the moment, there are more and more pending blasphemy cases," said I.A. Rahman, one of Pakistan's leading human rights activists. "Extremist organizations demonstrate and raise slogans, and judges are afraid. They agitate all the time, creating hatred, and the government is not doing anything. Successive governments have failed."

Maulana Abdul Rauf Farooqi, secretary-general of Jamiat Ulma-e-Islam, an organization with close ties to many members of the Afghan Taliban's leadership, rejected allegations that the law is widely misused to settle personal disputes, though he said he supports a rigorous police investigation before charges are filed. He said those who were physically attacked had brought the violence upon themselves by enraging Muslims' sentiments.

According to the Human Rights Commission of Pakistan, 34 people were charged with blasphemy last year. A government statistic says 27 were charged in 2012. At least 16 people are currently on death row for blasphemy, while another 20 are serving life sentences, according to Human Rights Watch.

"In the last three years we have seen a large increase in the number of cases of blasphemy," said Keith Davies, head of Rescue Christians, a U.S.-based charity that started operations in Pakistan four years ago.

Pakistan's blasphemy law predates the founding of the country in 1947, but during the 1980s the U.S.-backed military dictator, Gen. Mohammed Zia-ul-Haq, amended it to add the death penalty and single out Islam as the religion that may not be insulted, among other changes.

Pakistan is not the only nation with such laws on the books. Blasphemy offenses are punishable in more than 30 countries, including some with predominantly Christian populations, such as Poland and Greece, as well as Muslim countries like Indonesia and Pakistan, according to a 2012 report by Rev. Chloe Breyer, executive director of the Interfaith Centre of New York.

Most of Pakistan's 180 million people are Sunni Muslims who do not support the militants' violence or their abhorrence for religious minorities. Nevertheless, the minorities, including Muslims who belong to the Shiite sect of Islam, say even the smallest quarrel can land them in jail on trumped-up blasphemy charges.

Abbas Kamaili, a leading Shiite cleric, told The Associated Press that he supported the idea of a blasphemy law but criticized the Pakistani version as "ambiguous" and easily distorted by militant Sunnis who want to rid the country of Shiites.

The violence associated with Pakistan's blasphemy law has been brutal. Three years ago, liberal Gov. Salman Taseer was assassinated by his own guard after defending a Christian woman charged with blasphemy. In a separate attack, militants gunned down Minority Affairs Minister Shahbaz Bhatti after he campaigned for changes in the law. Last July, two brothers charged with defaming Islam's prophet were shot and killed as they stepped out of a courtroom.

Tariq, a Christian, is currently in hiding after authorities charged him with blasphemy. He said the charges came over a quarrel he had with two customers who bought faulty firecrackers from him. When he refused to apologize, he said the customers went to the police in Lahore and told them a lie that he had stuffed the firecrackers with pages torn from the Quran. Fearing capture by Pakistani authorities while he seeks asylum outside of the country, he spoke on condition that he be identified by his first name only.

The Pakistani representative of Rescue Christians, speaking on condition of anonymity for his personal safety, said several Christians are waiting for travel documents to secretly leave Pakistan, while others are in jail awaiting trial and targeted for death by militant groups.

The two young men who entrapped Ahmad at his homeopathic clinic in the eastern Punjab provincial capital of Lahore belong to a banned militant group, Lashkar-e-Taiba, according to local police. Lashkar-e-Taiba and other Muslim extremist groups consider adherents of the Ahmadiyya sect to be heretics.

The Ahmadiyya sect contends that the Mehdi or savoir, who is prophesized in Islam, came about 100 years ago. This belief challenges Prophet Muhammad's position as Islam's last prophet, a basic tenet of the faith. Pakistan amended its constitution in 1974 to make it a crime for Ahmadis, as they are called, to identify themselves as Muslims.

But businessmen nearby Ahmad's clinic said he never preached his religion. They said the police, who are required by a government order issued last year to rigorously investigate allegations of blasphemy before filing charges, never spoke with them or took their statements.

His neighbours said they were saddened by his arrest but would not dare testify on his behalf.

Mohammad Ershad, a barber, called Ahmad a "thorough gentleman," but added: "People don't want to say anything. Everyone feels it is better to save oneself."

Habib, who runs a nearby photocopying business, said he has known Ahmad for 30 years. Too afraid to be identified by his full name, he said: "No one wants to be on the target hit list of the mullahs. No one stops them. No one is safe."