A 13-Year-Old Hazara Boy Is Killed, Only To Become a Statistic

Last Saturday was just another day in 13-year-old Liaquat Ali's house in Quetta. The young Hazara boy's mother asked him to help her with some chores, but he wanted to go out. After some back and forth of her pleading and him refusing, he walked out. His father went back twice to persuade him to come back and help his mother with the chores. 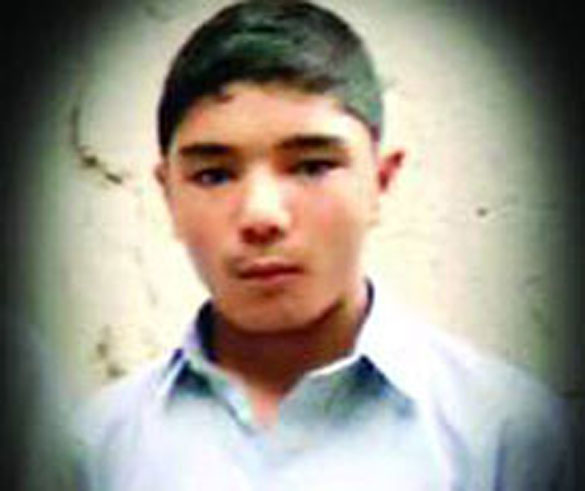 "I have to go; you won't see me again," he said angrily to his mother. He was wrong. And he was right.

They did see him a short while later. By then, his body had bullet wounds, his bleeding wouldn't stop, and he was in a coma.

His father, Mohammad Akbar, is wracked with guilt. "They said he's unconscious. He never spoke again." Liaquat's words had come true in the most terrible way possible.

The ongoing massacre of Hazaras by extremists in Balochistan is part of the killing of Shias all across the country, which has left hundreds dead and thousands mourning. Millions more have been outraged by the lack of action by the government.

"I want to stop going to school and start working. I want to help our family," he had once said to his father

There was a protest demonstration on Brewery Road in Quetta that day against the violence against the Hazara community, only a few minutes away from Mohala Bagh where Liaquat Ali lived.

He left the house at 10:30 in the morning. A few minutes later, his father learned that a Hazara neighbour from his street had become a victim of the violence. He went to their house to console the grieving family and waited for yet another body to arrive. At 11, it was him who needed consoling.

"Someone came and said, 'Liaqat has been injured. We saw him lying on Brewery Road in a pool of blood'." He was told Liaquat had been transported to Bolan Hospital.

"We went to the hospital as quickly as we could," his father said in a phone interview. "They told us he'd been transferred to CMH Hospital."

By the time he reached the CMH, Liaquat was in the ICU, along with seven others who had been shot. Two of them, including Liaquat, were in critical condition. A few hours later, one of them died.

"I think his name was Javed. I think he was Liaquat's friend. They were all his friends," he said. As the doctors exited the emergency room where Liaquat was being operated on, he tried to find out what had happened. All he was told was that his son was in a coma, before the doctors ran inside the next ICU to attend to the other victims.

"He was bleeding, you see. He kept bleeding," he recounted with anguish. He bled for three days.

"He went out with his friends a lot. I used to think they weren't good friends." But over the next 72 hours, the same friends came to the hospital every day to donate blood. But the holes in his body simply wouldn't allow for any of it to stay in.

"He just kept bleeding and they kept donating. That's when I realized that I was wrong. His friends were good people."

Liaquat's father feels guilty, and not just for misjudging his friends.

With eight sons and a daughter to support, he did whatever job he could find when he was young. A decade ago, he was in Saudi Arabia for several years, trying to support and provide for a family. But in his late 50s by then, he was just too old to bear the scorching heat of the Arabian deserts. "I just couldn't. I tried very hard. We are poor people," he said, fighting back tears.

Their poverty meant that even though all his sons would have loved to continue studying after high school, they couldn't. One by one, they had to either drop out of school, or finish school and not go to college. One ended up going to Iran to work as a labourer and send home money. One moved to Afghanistan to seek better opportunities, hoping the reconstruction and aid money would have created better jobs there. The other four who are old enough simply took up where their father had left off - wandering in the streets of Quetta for work - any work.

Despite this, the father wanted to send his younger children - Liaquat, his younger sister, and his youngest brother - to school. Liaquat was in sixth grade in Ali Model School. "We didn't have the money for books and notebooks most of the time," his father said.

Liaquat was aware of his family's poverty and at times, and although he was a child, his self-respect wanted to stop him from being a burden on them. "I want to stop going to school and start working. I want to help our family," he had once said to his father.

On Wednesday, he was beyond help. Liaquat died in coma after five days. Like the 300 Shias killed in Pakistan this year according to Human Rights Watch - over 100 of them Hazaras - the 13 year old sharing the struggles of his family became a statistic, another Shia who was killed for his faith.

Few arrests or convictions have been made by law enforcement agencies in connection with these killings.

And like many others, his death still lacks validation. There is no post-mortem report yet. Not even a certificate. The hospital gave his family a piece of paper, but days later asked them to give it back saying they would give them another one later.

"I don't know what was on that paper or what would be on the next one. They didn't tell us," his father said. He was far more concerned about the fact that he hadn't been nice to his son.

"I always thought he wasn't listening to me. He was more attached to his mother. He would be in the kitchen with her when he was home, telling jokes." He paused, his voice breaking. "His youngest sister, she just started school, she wouldn't eat until Liaquat came home from school. I just thought he would go out and he would fall into bad habits. I didn't get to tell him how much I loved him. I don't think he knows."

And he doesn't know why his son died. He didn't go to the police. They hadn't contacted him eight days after the shooting and three days after his death. He doesn't even know who did it. Some Hazara activists on Twitter however are alleging that the Frontier Corp was responsible. FC is a federal paramilitary force which was just given policing powers in Quetta for two months.

They say Liaquat was protesting against the killing of Shias at a gathering on Brewery Road when FC opened fire on the protesters. But Liaquat's father is clueless.

Josh Shahryar is a reporter covering human rights and foreign affairs in the Middle East and SAARC countries.