Pakistan In Throes Of Genocidal Ideology

The ethnic cleansing in Pakistan has reached an alarming point, with over 120 Shia people killed and several severely wounded in the recent bombings across the country. 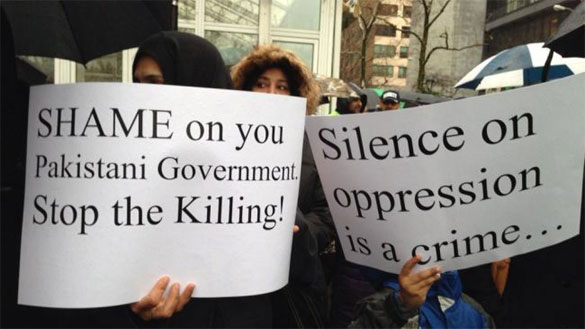 The families of the victims decline to bury the bodies of their loved ones unless they hear at least a word of condemnation from the Pakistani government.

In spite of a salvo of ethnic killings in the country, the government turns a blind eye to the tragedy and refuses to take any measures whatsoever in curtailing the inhumane trend. The reason may be tracked down to the fact that militancy has been implicitly backed by government-affiliated organizations such as ISI and the intelligence agencies for the past two decades. There is a purported claim that the ISI is not in the least affiliated to the government and that it operates out of its own volition in eliminating the Shia population which forms at least one-fourth of the population.

Human rights activists said on Thursday that the police and the security forces had failed to protect the vulnerable community. “The callousness and indifference of the authorities offers a damning indictment of the state, its military and security agencies,” said Ali Dayan Hasan, the Pakistan director at Human Rights Watch.

The assassination attempts in Pakistan initially included the Shia elites such as doctors, professors, engineers, and lawyers. However, in recent months, the appalling assassinations have come to encompass any Shia gatherings regardless of their social ranks. Unfortunately, the Pakistani government has constantly tried to put a lid on these crimes, attribute them to sectarian violence and refuse to arrest the guilty parties. As usual, the West has chosen the ‘wise’ policy of media blackout on the inhumane issue. And if there is, the Western media tries to depict the tragedy in the light of a sectarian violence between the Sunnis and the Shias. Their choice of words in this regard well attests to their deliberate manipulation and misreporting of this horrific incident which springs from nothing but blind ignorance and prejudice. In a report by BBC, the network said “Sunni militant group Lashkar-e-Jhangvi said it carried out the deadliest of Thursday's attacks killing at least 85”, sought to attribute it to sectarianism and shrewdly avoided siding with the victims or condemning the terrorist attack.

The epicenters of these Shia killings include Quetta, Gilgit-Baltistan, Parachinar, lower Punjab and several regions in North West. However, recent months have witnessed Shia killings in large cities such as Lahore, Islamabad, Karachi and Rawalpindi.

The root causes of religious extremism in Pakistan are traceable to the time when the US government sought to oust the Soviet forces from Afghanistan. In those days, the ISI was heavily mobilized by the US and funded by the Saudi Wahhabis to achieve this goal. No wonder, the only countries that recognized the Taliban with the green light of Washington were Saudi Arabia, Pakistan and United Arab Emirates.

A prominent Harvard researcher Nawaf E. Obaid says a former high-ranking Pakistani civil servant with close ties to his country's intelligence service, the Inter-Services Intelligence (ISI), told him that "the US provided the weapons and the know-how; the Saudis provided the funds; and we provided the training camps and operations bases for the mujahidin in the early 1980s, then for the Taliban." According to Obaid, the Saudi political Mogul Sheikh Mohamed bin Jubier, who is known to be the `exporter' of the Wahhabi creed in the world, was a strong advocate of aiding the Taliban."

After the exit of the Soviet forces from Afghanistan, the US government decided to continue using these forces in a new direction, a direction which could pave the way for political inequilibrium and religious extremism in Pakistan in particular and in the region in general.

In the meantime, a large number of Shia groups reacted strongly to this new-fledged radicalism which threatened to hurl the country deeper into chaos and commotion. Instead, the US government discerned a strong necessity to curb this fighting force. Therefore, it embarked on a series of complicated and comprehensive plans: to smother this political and intellectual resistance. In the course of time, the US started strengthening radical groups such as al Qaeda, Taliban, Lashkar-e-Jhangvi (LeJ), Sepah Sehabeh, Jundallah and other fledgling extremists in Pakistan. All this was accomplished with the financial assistance of Saudi Arabi and some Arab states in an effort to promote religious extremism and counter the burgeoning influence of Iran in the region.

The assassinations in Pakistan are in fact products of that twisted ill-defined mentality systematically promoted and funded by the US and its puppet Arab regimes.

No matter what labels we use to describe the tragedy, the fact is that what is happening in Pakistan to the Shia minority is an ugly truth, an indelible human stain and an act of genocidal ideology the bitter memory of which will rankle in the minds for many years to come.

Dr. Ismail Salami is an internationally published author of several books and hundreds of political articles. In his writings, Salami examines the historical developments that impact national relations today, and the way western people view Iran. His writings have been translated into dozens of languages. He has published more than twenty scholarly essays in international academic journals. Salami has taught English literature at the University of Tehran, Alzahra University, and Tehran Teachers' Training College. He has also taught Iranian studies at the College of International Relations affiliated to the Iranian Foreign Ministry. Salami has a PhD in Shakespeare Studies and is the author of Iran, Cradle of Civilization, A Dictionary of Journalism and A Dictionary of Intelligence and Security Terms.