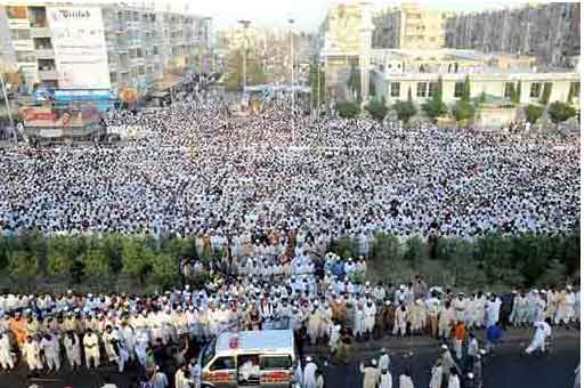 KarachiNoor Masjid in the heart of Karachi is disputed territory. And like any such territory, it stands barricaded along with a well guarded entrance.

Here, men in shalwar kameez stand at the ready. Outside, there are policemen in vans, waiting as if there is a battle that is about to begin. Unlike other mosques where the government worries about the clerics within the premises, here the danger comes from the outside, say police officials.

The mosque is currently in the hands of the Ahle Sunnat Wal Jamaat, formerly known as the Sipah-e-Sahaba Pakistan (SSP). The SSP was banned in 2002 by General Musharraf on grounds that it bred extremism. Today, with government patronage seemingly withdrawn from the organization, it is struggling to ensure that the mosques in its possession are not taken away from it.

The politics of the mosques is in full swing. Abrar Shaiq, who manages the daily affairs of Noor Masjid says that his fear is that the Sunni Tehreek may take over the property, with help from the government. “The police out there are not to protect SUNNI TEHREEK SEEMS TO HAVE WON FAVOUR WITH THE GOVERNMENT AFTER THE LATTER'S FALLING OUT WITH THE TALIBAN. They are there to support those who want to kick us out. “

The Sunni Tehreek seems to have won favour with the government after the latter's falling out with the Taliban. They are the party that is being readied to preach the moderate face of Islam. “They are the new favourites . The government needs one or another religious party in its ranks. Now they are betting on the ST to fight the extremism of the Taliban,“ comments professor Shamim Ahmad.

But the Taliban and its associated parties, like the ASWJ are not giving up without a fight.

They believe they are strong enough to stand without government help. Earlier this year, police arrested 22 people belonging to the Deoband side in the aftermath of fighting between the ST and the ASWJ and sealed the mosque for a few days.

The dispute over Noor masjid is actually tied with the history of Sunni Tehrik. The Braelvi organisation had made its first show of strength in 1992 when it organised a huge rally in Karachi to put pressure on the administration to hand over this mosque. Dozens of people were injured and several vehicles were also burnt in the incident.

The government then was not as sympathetic. Now it is, say observers.

Officials say that there are several dozen such mosques all over the city where possession is becoming a point of war.

The government has tried to cool tempers but there is a feeling that the ST is being given backing. The ST feels this is not so. Even the ST chief says there is an imminent threat to his life.

Sunni Tehreek workers also fear that the Taliban will bomb their mosques as it does shrines.

This is yet another war that is brewing in Pakistan's urban centres, warn many.