Violence against Religious Minorities in Pakistan – Light the Torches; Join the Mob; Kill the Infidels

Light the torches; join the mob; kill the infidels.

If national mottos were an accurate representation of a nation, then these words would replace unity, faith, discipline.

In the district of Karak, located in Khyber-Pakhtunkhwa, the Hindu community has been fighting for decades to restore the shrine of Shri Paramhans Ji Maharaj. Initially destroyed at the hands of a local mob, the shrine was then illegally occupied by a religious cleric who refused to vacate the property. Since then, the Hindu community went through a Kafkaesque ordeal involving Jirgas, the district administration, the Evacuee Property Trust Board, and the Ministry of Religious Affairs to try to reclaim the shrine. It wasn’t until the Supreme Court of Pakistan, in 2015, ordered the provincial government to restore and reconstruct the shrine that the issue was finally put to rest. 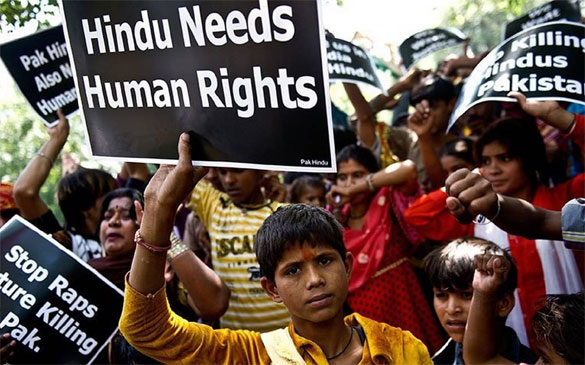 But as religious minorities have learned from this country, decades of work can be burnt to ash by the words of one religious zealot.

Last Wednesday, spurred on by a local cleric, the shrine was set ablaze and damaged by a mob that also included members of the JUI-F. The FIR registered against the cleric reports that he told the crowd that whoever died while demolishing the mosque would be a martyr. This promise of paradise was enough to motivate over a thousand people to descend upon the shrine and tear it apart.

This is not an isolated incident. The list of incidents of violence against religious minorities is long and full of loss.

Many of these attacks are actually motivated by private disputes; religious animus is merely a convenient weapon to wield when the dispute is with a member of a religious minority. Aasia Bibi’s case was more about her act of drinking from a communal cup that gave rise to an argument, the blasphemy allegation came later. In 2013, a mob attacked a Christian neighbourhood in Lahore setting fire to 150 houses and two churches after a local barber accused a Christian sanitation worker of blasphemy shortly after a heated argument between them. In 2014, a dispute between lawyers and police in Jhang led to 68 lawyers being accused of blasphemy by the police as a means to settle the score.

Much like these incidents, the attack on the shrine in K-P was caused by a private disagreement. In this case, a dispute regarding a contract for the shrine’s extension.

Religion has therefore become a weapon that allows people to settle personal vendettas. Ably assisted by Pakistan’s many laws that have a zero tolerance policy for any kind of disagreement with the majority religious faith. “Blasphemy has become a political battle,” IA Rehman once said to The New York Times. “It is no longer just a criminal or religious problem — it’s become a political issue that is used to silence voices and create a climate of fear.”

These laws are no doubt a problem, and their continued existence is a barrier to any progress towards religious harmony in the country. But to focus only on laws would be a shallow way of looking at things because this is a broader social problem.

A problem in which religious minorities are persecuted not just through violence, but through discrimination that robs them of their dignity. Slurs against them are common and freely used; and they are relegated to jobs that nobody else wants.

To be sure, the government has responded to last week’s incident with arrests and proclamations of accountability. However these are reactive measures to a problem that requires proactive steps. Steps that no government, no political party, has been willing to take since this country was created.

Nelson Mandela once pointed out that no person is born hating another; they are taught to hate. So, to counter hatred, we have to identify where hatred is nurtured.

Educational institutions are one place where this occurs. In school textbooks, children are taught how Christians, Hindus, and Jews are the natural enemies of Muslims, and that it was Muslim heroes who vanquished the infidels from the land, emancipating it from their tyranny. Eliminating these narratives before they are taught to impressionable minds is one way to trim the numbers of future lynch mobs. And if the government is insistent on making our children gulp down even more religion through the single national curriculum, then it should at least focus on Islam’s ideas of tolerance and respect for diversity.

Political leaders must be held strictly to account for any peddling of hate, regardless of whether hate helps rake in the votes. Last year, Fayyazul Hasan Chohan made demeaning comments against Hindus which resulted in a mere slap on the wrist. He was soon back in the Punjab cabinet. Hate speech, it appears, does not disqualify a person from cabinet positions (meanwhile, holding a permanent residence of another country means you have to step down from a special adviser role).

This only compounds the problem because the criminal justice system in Pakistan protects you only if you have a specific social and economic status. In the absence of money, power, or influence, the system is your worst enemy regardless of what the law says.

Tackling this problem will require the political will and vision to introduce a broad swathe of legal and policy reforms. It cannot be solved by slapping on new laws or by one court case. It is a hard road, but after letting this country’s religious minorities suffer in neglect for decades, it is what we owe them.

Original Headline: Faith as a weapon