I met him after a long time as I had spent nearly the whole of last month in India. Young historian, who, after first studying and then teaching Muslim History in a couple of universities in the US had now returned to Pakistan. Somewhere along this route, he had converted to Shiaism from his austere Ahl-e-Hadees sect. We had earlier discussed the target killing of Shias in Pakistan and I was keen to hear his opinions on the measures taken by the government for sectarian harmony after the Pindi blast.

“How have you been?” I squeezed his hand and asked him lovingly.

“Fine Aapa” he said. “I was in Jehlum for the Ashura, for the world famous, glorious Zanjeeron Ka Matam (striking the body with chains).” 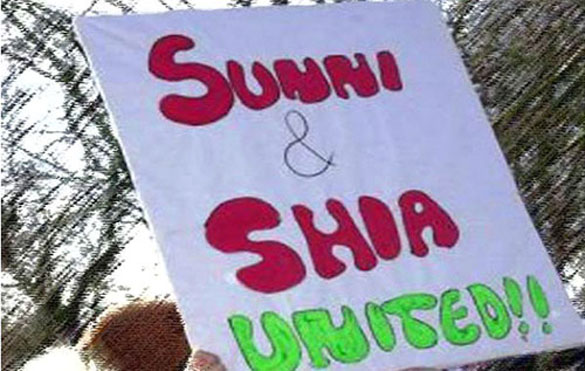 ‘Hmm!’ I nodded, aware of how my simplistic mind fails to comprehend the grandeur and significance of the ritual and concentrates only on Shias not getting killed. That a religiously victimised community would become more rigidly religious was only inevitable, I thought. Over coffee we discussed some aspects of clashes between communities. Many Shia families, especially young men are migrating from Pakistan, a deeply painful occurrence that I have been trying to make sense of through the act of writing poetry. I remarked wistfully, “I wish one could do something, just anything to protect and help the Shia community in Pakistan. “

“Convert? “ I repeated a bit stupidly.

“Convert, that is the solution,” he said with finality. In his tone the proverbial enthusiasm of the newly converted.

“How can I?” I said, “I am a Marxist you see! We have our own sects, such as the Trotskyites, the Fourth Internationalists etc. I find it hard to convert to even anyone of those sects.”

“Why?” he asked with curiosity, “Do you disagree with them?”

“It’s not that” I explained quickly. “One would have to read mounds of books and documents to agree or disagree. My reading is not inclined to that kind of literature.”

I was remembering the days when I had returned from England and gotten involved with militants in villages in the mountains of Balochistan. I then heard that I was being called a Trotskyite by several brigades of comrades. That had forced me to find and read some Trotskyite literature – no small feat in the Pakistan of the seventies – to be able to determine at least if I was a Trotskyite or not.

“Better follow your own heart and mind,” I said lamely, adding as an afterthought, “Poets and writers tend to do that.”

“Well, if you really look at it dispassionately,” he continued with unconcealed warmth, “The way it happened after Rasul Allah, PBUH’s death, it is obvious that soon there was this denial of the rightful inheritance of the garden of Fidik….”

“I know, I know,” I hastened to reassure him. I had heard about the garden before, and a few more things in connection with the Original Discord. In passing, I had even read about it, but these details had failed to excite or incite me. How could I tell him that? Supposing I said, “For starters, much time has elapsed since then, centuries to be precise. One thousand and four hundred years!” That would be inferred as rubbing salt on wounds. So I said what I knew and strongly believe:

“The Shias are the heart and soul of the sub-continental Muslim civilization.”

“Never mind the garden. “ I said in exasperation. Then beseechingly added, “We can’t sort it out now. “

Then said to him, “My Mom used to tell us the stories of the Khulafa-e-Rashideen every night before we went to sleep. She was particularly fond of Hazrat Ali. Our family was Hanfi Barelvi, you see.” Repeating this, my heart yearned for the good old days; the good old days when I hadn’t a clue of the plethora of sects, their labels totally unfamiliar to our ears. In college and school we were completely unaware of who was a Shia and who a Sunni amongst us. Unless, of course, a friend invited us for Haleem during Moharram. There would be beautiful Marsia singing there: great poetry. We were all fascinated. This culture of being fascinated by the beauty of the religious practices of the other was the social response to the demands made on society by the physical reality of living together. How beautiful and sane it all was

I went on, “I don’t think conversion is the answer. I think the days of conversion are…well…more or less… over.”

“Even to religions?” he enquired.

“Yes. “I replied, “No new religion has come up for centuries. Even prophethood is not in vogue anymore. Till the sixth or seventh century, every now and then, a prophet would appear, mostly in the region of Mesopotamia. And me? I am an atheist. “

“No one is asking you to give up atheism and become a renegade of the faith.” he cajoled me.

“Then how can I become a Shia?” I was puzzled.

“You are a Sunni atheist now, similarly you can become a Shia atheist”, he said reassuringly.

At this I laughed and laughed till tears tricked down my cheeks as I wondered, somewhere there must be some meaning in our nearly comic discourse.