Radical Islamists Have Always Viewed Pakistan’s Christians as a Threat

Pakistani Christians played an important role in Pakistan’s independence. When they were in dire need of Sikh, Persian, and Christian minorities’ support, the Supreme Leader and other Muslim leaders promised them equal freedom and rights in the newly established government. 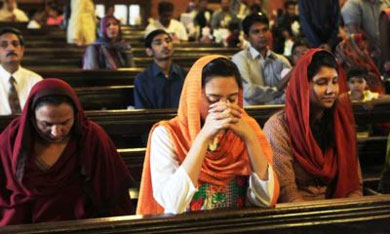 Thus Christians in Punjab and Sindh were fully active after 1945. Christians also supported the idea of a separate Muslim state.

Since Pakistan’s independence in 1947, until the mid-1970s, the Pakistani government was largely secular. But on 26 March 1971, Eastern Pakistan was declared the independent state of Bangladesh, and most of the Pakistani Hindus (who lived in Bangladesh) separated from Pakistan. Meanwhile, Pakistan’s transformation into a culturally integrated and increasingly Islamic state has turned Islam to the source of legislation and a cornerstone of national identity. The governments of Zulfiqar Ali Bhutto and Zia al-Haq therefore took greater Islamic law into account.

Most of Pakistan’s population are Muslims, but Christians are the largest minority after the Hindus. The south of Karachi has a large number of Christian settlements and there are many Christian villages in central Punjab and the cities of Lahore and Faisalabad.

Most Christians’ Ancestors converted to Christianity in order to escape their lower caste during British colonial times. Christians are the poorest part of Pakistani society. But a number of prosperous Christians live in Karachi and their ancestors were of the educated and prosperous class.

Christians and the Islamic Extremists

Prior to separation from India, Pakistan was a diverse religious and cultural community, but later tolerance to other religions and cultures was reduced. Now, Pakistan is a country where Muslim extremist groups and movements do not tolerate religious minorities. As a matter of fact, Christians have repeatedly been subjected to bloody attacks by Islamic extremists. Pakistani Christians, especially Christian Neophytes who have converted from Islam to Christianity, have always been the main target of Islamic hardliners. In this regard, the terrorist attack in Peshawar and the attack on the Christian Center in Lahore were among the most violent terrorist attacks. Along with the bomb blast, suicide attacks, burning Christian homes and churches and increasing ISIL attack on Pakistani Christians at Easter or Easter celebrations are also signs of this.

Reasons Behind Extremists’ Attacks On Christians

While Christians and Muslims previously used to live in peace along with each other and were rarely attacked, the following factors increased attacks on them.

First. Indeed, some consider the Pakistan constitution as the root of The radicalization of space for the benefit of extremists.

Since the 1990s, Anti-Blasphemy laws approval has led to the Christians’ being accused of Blasphemy and insulting the Prophet of Islam, while some of these allegations are false charges with just personal motivation. These accusations sometimes led to the violence against the Christians and they always have security concerns for religious celebrations.

Second. Before the separation, there was a lot of tolerance in Pakistan, but tolerance has been reduced for several decades.

Pakistani society has become increasingly Islamized and homogenized. As some claim that before the separation, minorities made up 15 percent of the country’s population, but it is currently less than 4 percent.

Third. Most of the harassment of Christians in Pakistan by extremist Islamic groups is influenced by political parties. In this regard, some believe that extremist groups that have close relationships with the security and intelligence agencies play an important role in this area. Currently, these radical Islamist groups are managing thousands of Islamic schools and educational centers and provide children and youth with wrong and inappropriate teaching which lead to violence against religious minorities such as Christians. In the meanwhile, churches that engage in social and youth activities experience the worst persecutions.

Fifth. ISIL has supporters in Pakistan, and many extremist militias in the two countries (Pakistan and Afghanistan) follow ISIL’s fanatical views of Shia Muslims and theory of putting Christians under pressure and killing them.

Sixth. What is clear is that previous governments have virtually failed to provide adequate space to prevent the migration of Pakistani Christians abroad. In the meantime, the Pakistani opposition has accused the government of “serious violations” of religious freedom by failing to cooperate against terrorist groups.

The Future of Pakistani Christians

Many Pakistani Christians believe that they do not have the socio-economic status and equal access to available opportunities, and indeed they are second-class, practically lower-income citizens, and have been denied to become President, Prime Minister, Senate Speaker, or National Assembly Speaker. They also claim that the Christians work in the poorest part of society. In the same vein, some Pakistani think tanks have included Pakistan in the list of a handful of countries that have placed religious minorities under the strongest pressure.

Despite supportive measures adopted by governments in Pakistan (such as allowing guns for Christians) to protect themselves against terrorist attacks, radical Islamists have always viewed Pakistan’s Christians as a threat. However, as three-quarters of Iraqi Christians have left the country since the fall of Saddam Hussein’s regime and also increasing of the number of migrant Christians in Syria and the region after 2011, This may also happen for Pakistan.

Indeed, there may be numerous reasons such as war, unemployment and convulsions in the region and the increasing attacks by ISIS and other fundamentalists behind the increasing of Pakistani Christians’ migration to abroad in the short and long term. This in turn can have many effects on Pakistan and its relations with Europe and the West.