Your Cowardice Will Not Deter Me, I Am Christian and I Am Pakistani

It was a beautiful night. We had all gathered to celebrate my cousin’s birthday in Kohati. The party went on till late night and at around 12:30 am, on my way back home, I marvelled at how peaceful Kohati bazaar looked. The city was sleeping, the shutters were down and with minimum traffic on the roads, the walk back home seemed so lovely knowing that the core of Peshawar city was so beautifully serene.

Not even in my wildest dreams had I anticipated that the very next morning would smell like the blood and tears of hundreds. 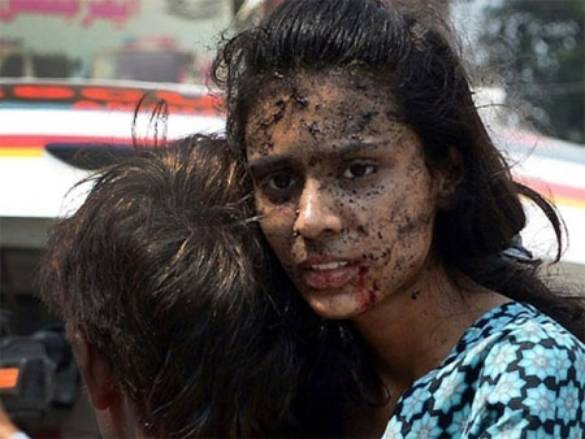 It was a fine Sunday morning – bright and sunny. Many of my family members and friends were getting ready for the Sunday mass; a morning which usually brings spirituality, satisfaction and joy. Who knew that it would turn in to such a ghastly spectacle of bereavement? All we went to do was pray. Even this is unacceptable in today’s Pakistan.

Two consecutive blasts in the All Saints Church shook the city while worshipers were still inside, innocently praying. All the serenity from the night before vanished, just like that.

I myself was initially unaware of the blasts, since my immediate family and I attend St John’s Cathedral. However, when the phone rang, my life changed forever. A friend called up and inquired about my family; I had no idea what she was talking about, but then I turned the TV on and scenes of my beloved community made me hysterical.

What is there to say?

We didn’t deserve this.

A cousin of mine, Shaleem John, was a part of the Sunday mass and he witnessed first-hand both the blasts. He was standing outside the Church near a water cooler and just 10 minutes before the blast, he was somewhere near the suicide bombers. It is a miracle that he is alive today.

A fellow worshiper who was standing just a few paces from him was injured by shrapnel and fell on top of my cousin; this probably saved his life. He had passed out for a few minutes but as he regained consciousness, the thing that hit him first was the smell- like rust. Moving his eyes across the devastation, all Shaleem could focus his eyes on was the pieces of flesh – human flesh – that clung to the Church’s building.

On hearing about the blasts, we rushed to the site in an attempt to do what we could to help. At the Lady Reading Hospital, all one could hear was screams, sobs and agony. I saw a woman who had lost her husband in the blast but didn’t even realise that her daughter was missing too. Having looked for her daughter everywhere – inside the Church and outside – she was taken to the hospital where after hours of search she found her daughter in the children’s ward. The poor woman seemed to be on the verge of a total breakdown when she was reunited with her daughter.

My friend’s sister suffered a serious injury to her eye. She was carried to the hospital where the doctors performed a minor surgery, but unfortunately there have been many blood clots and she is now on a ventilator in critical condition.

The whole day was a series of grave and graver losses.

As the day proceeded, I found out that a close friend and his father had also passed away. This boy was in his final year at Khyber Medical University – he was studying to become a doctor and was the pride and joy of his family and his community. We all looked up to him and hoped that one day he would serve not only the Christian community, but the nation on the whole.

But Christians don’t have the right to dream in Pakistan, do they?

Today his mother and younger siblings are left all alone – no father, no brother and no answers.

The tales of grief go on and on; 81 is no small number. But how much blood will satiate the appetite of these monsters?

From a Christian in Pakistan:

We hadn’t yet recovered from the Gojra and Joseph colony’s incidents, and now this one has ripped open the already raw wounds.

The silver lining is that I have many Muslim friends and colleagues who have been calling me since yesterday, showing their love, concern and support. Many have told me how terribly sorry they are. They have felt my pain and made it their own. This is the true Pakistan; a place where people of all faiths come together, not the polarised state the terrorists want to portray. These calls and visits from my Muslims friends have defeated the terrorists. No matter how much they bomb us or how many lives they take, they cannot take away my Pakistan.

Christians stood alongside Jinnah for this country; Pakistan is my country too and I will not let bombs scare me. We will stay; we will prevail and we will fight. We will serve our nation with all our heart.

Yesterday’s incident has left us shocked, but we will keep praying to God to save our country because Pakistan was made for Christians, Muslims, Hindus and every other minority present here.