EXCEPT for some defiant holdouts, most Muslims have come to accept the printing press, loudspeaker, weather forecasts, cameras and television, blood transfusions, organ transplants, and in-vitro fertilisation. Earlier fears that technology will destroy their faith are disappearing. Although religious extremists have killed polio vaccine workers by the dozens, Pakistanis are likely to accept the Covid vaccine more easily than Americans. This is progress. 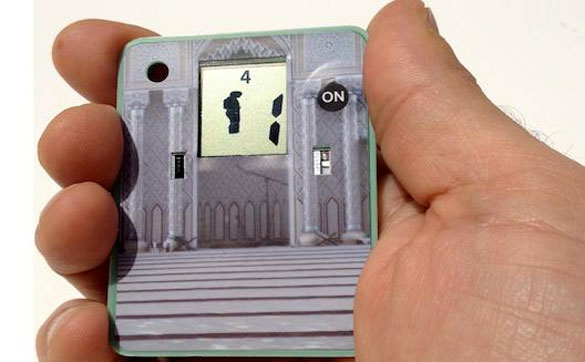 The Salatcard product size in the palm of your hand. (Images via Salatcard)

Technology for religious rituals is also becoming popular. For example, you may buy a small gadget called the SalatCard which uses proximity sensors to count the number of Rakats performed during prayers. Also available online is an environmentally friendly Wazu (ablution) machine using visual sensors. Responding to public complaints of muezzins with rasping voices or bad pronunciations, Egypt’s government is carrying out an experimental airing in 113 mosques of Cairo where a computer will initiate the standardised Azan at exact times. A few years ago multiple fatwas would have lambasted such innovations. But not anymore.

What of science, the fount of technology? Consuming technology does not, of course, resolve conflicts between science and religion. Nor does it necessarily mean that science as a way of looking at the world is gaining ascendancy. The latter motivated the 2020 Task Force Report on Culture of Science in the Islamic World. Led by Prof Nidhal Guessoum (Sharjah) and Dr. Moneef Zou’bi (Jordan), with input from Dr Athar Osama (Pakistan), their online survey gives some hints.

At one level the results are encouraging. Their survey of 3,500 respondents, chosen mostly from Arab countries and Pakistan, shows knowledge of basic scientific facts as slightly better than in developed countries. The authors concede that this surprising result is probably because relatively educated and internet-savvy respondents were chosen. Still, one hopes that this is not too inaccurate.

But even if true, knowing facts about science is unconnected with having a scientific mindset. The difference is like that between a USB memory stick (where you dump data) and a CPU chip (which is the decision-making brain of your laptop or smartphone). The first is passive, relatively simple and cheap. The second is active, extremely complex and costly.

Correspondingly, the traditional mindset takes knowledge to be a corpus of eternal verities to be acquired, stockpiled, disseminated, understood and applied but not modified or transformed. The scientific mindset, on the other hand, involves ideas of forming, testing and, if necessary, abandoning hypotheses if they don’t work. Analytical reasoning and creativity is important, simple memorisation is not.

Going through the report, it is unclear to me whether the questions asked — and the answers received — have helped us understand whether Muslims are moving towards a scientific worldview. Perhaps the organisers thought that asking difficult questions upfront is too dangerous. But the strong emphasis they place upon freedom, openness and diversity as a condition for nurturing science is praiseworthy.

Here’s why science — and developing a scientific mindset — is so difficult and alien. Humans are never completely comfortable with science because it is not commonsense. In our daily lives one sometimes has to struggle against science. As children we learned that actually it’s the earth that moves and yet we still speak of the sun rising and setting!

Another example: heavier things fall faster, right? This is so obviously true that nobody tested it until Galileo showed 400 years ago that this is wrong. Wouldn’t it be so much nicer if the laws of physics and biology lined up with our naïve intuition and religious beliefs? Or if Darwin was wrong and living things didn’t evolve through random mutation? Unfortunately, science is chock-full of awkward facts. Getting to the truth takes a lot of work. And so you have to be very thorough and very curious.

Historically, lack of curiosity is why Muslim civilisations were ultimately defeated. After the Arab Golden Age petered out, the spirit of science also died. The 17th-century Ottoman sultans were rich enough to hire technologists from Europe to build ships and cannons (there were no Chinese then) but they could not produce their own experts from the ulema-dominated educational system. And when the British East India Company brought inventions and products from an England humming with new scientific ideas, the Mughals simply paid cash for them. They never asked what makes the gadgets work or even how they could be duplicated.

Without a scientific culture, a country can only consume and trade. Pakistan functions as a nation of shopkeepers, property dealers, managers, hoteliers, accountants, bankers, soldiers, politicians and generals. There are even a few good poets and writers. But there is no Pakistani Covid vaccine. With so few genuine scientists and researchers it produces little new knowledge or products.

That 81 Pakistanis were recently ranked in the world’s top two per cent of scientists by Stanford University turned out to be fake news. Stanford University was not involved in this highly dubious ranking. This was confirmed to me over email last week by Prof John Ioannidis of Stanford University. He, together with three co-authors, had been cited as the source.

What will it take to bring science back into Islam? The way may be similar to how music and Islam — which in principle are incompatible — are handled in Muslim countries today. It is perfectly usual for a Pakistani FM radio station that is blaring out Lady Gaga’s songs to briefly pause, broadcast a pre-recorded azan in all its dignified solemnity, and then resume with Beyoncé until the next azan. Although the choice of music is quite abysmal, there is a clean separation of the worldly from the divine.

Separation is the key! When Galileo famously said “the Bible teaches us how to go to heaven, not how the heavens go”, he was arguing the domains of science and belief do not overlap. This is how the West, China, and India developed modern scientific cultures. Centuries earlier, Muslim scholars had readily absorbed Greek learning while keeping their religious beliefs strictly personal. This made possible major discoveries and inventions. Whether one likes it or not, there is no other way to develop a culture of science.

Pervez Hoodbhoy is an Islamabad based physicist and writer.