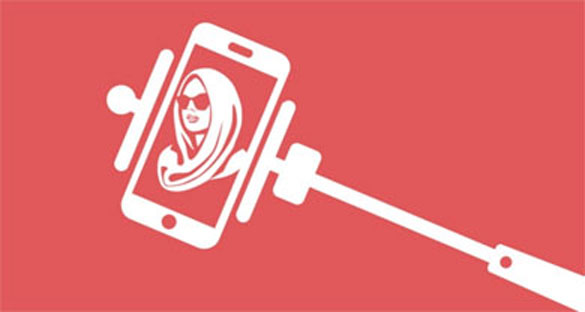 In what is common enough now to be labelled a ‘trend’, another high profile hijabed influencer has removed her headscarf and ‘come out’ with her decision to the viewing, trigger-happy public. We know the drill by now. You’ll have those from the condemnation quarter, borderline relishing the public fall into such apparently open transgression. You’ll get the sarcastic querying over how once they had monetised their ‘niche’ of modest fashion, they ditched the cause. You’ll have the “I’ll love you no matter what” echoes supporting any and every move made. Above all and no doubt, you will also have the many silent onlookers who will be weighing up the scene in front of them and nursing their own insecurities around wearing the hijab in the first place.

As an absolute given, the ‘power’ one exercises when in the public eye can be a force for whatever you chose. At a time when there were few confident expressions of hijab-wearing women in the public domain, some influencers did a great service for young Muslim women unsure of their identity. Many were shown how you can be a visibly Muslim woman, while retaining your identity and perhaps a little bit of flair at the same time. Naturally, on the flip side of this, is the reality that the removal of your headscarf will have ripple effects through your community of supporters. Rightly or wrongly, you became a role-model. Rightly or wrongly, your actions will influence the decisions of your viewership (I mean, you aren’t called an influencer for nothing, right?).

No two people share the same journey, and this is actually what makes it all the more problematic when you take to a public platform to “speak your truth” about an issue related to a unanimous religious requirement. Your “truth” applies to nobody but yourself, but in its delivery, it will touch upon some common themes and topics familiar enough to the listening ear to be co-opted and reapplied into another context. Maybe that girl who was trying to keep her head down and get on with her work in an awkwardly hostile work environment. Maybe the young woman torn between her friends and the latest hype versus keeping up with her salāh on campus. Maybe that one who was feeling the weight of the stares on public transport or the judgment of every store clerk when walking into a shop. Your slow, steady decision-making process, now delivered to the public through a careful soft-focused lens could be someone else’s tipping point, at a time when they desperately needed stabilising.

The narrative of these post-hijab “coming out” videos seem to cover recurring themes. Couched in the language of ‘self-love’, ‘speaking my truth’ and ‘being brave’ enough to ‘be who you truly are’ can leave you feeling like such radical introspection and apparent enlightenment caused them to outgrow Allāh altogether. A common motif of “we can reach the true meaning of modesty without a piece of cloth” is merely a trendy appropriation of “the letter of the law no longer applies, as we have embodied the spirit”; though the jury may still be out on whether either of those things have even been attempted, let alone achieved.

The focus on the self, the individual and the self-esteem movement which bolsters this hyper me-ism of today’s age, leads to this passionate interest of getting to know oneself, rather than getting to know one’s Lord. “Live for yourself and not other people’s judgements” is a barely concealed shorthand for “don’t care for any resistance” because the priority of the age now is the indulgence of the self we have constructed, leaving little room for the idea of a Divine authority, let alone difficult yet virtuous actions which aid you to His Pleasure.

When the Self takes centre stage, what could reign supreme over that? These aren’t the idols of yesteryear which required ritual sacrifice and an entrance fee for the privilege. This is the idol of the self-esteem movement, where carefully crafting the version of you which sits happily in your current mind-frame is inviolable. When the mood of the era cushions the path towards this, how regressive, restrictive and ‘not my truth’ is it to return to the basics of a creed steeped in timeless, not trendy truths.

If your journey of self-discovery has taken you down a celebration of your own self, far removed from being centred with Allāh, then know that the idols of every age will fall; even when they’re the ones of our self-perception we’ve carved in our very own minds.

Zimarina Sarwar is a freelance writer and researcher currently based in London with her 4 young children. She holds an MRes in Linguistics from Kings College London and her interests include language, spirituality, social justice and … a bit too much baking.

Original Headline: When you’re too ‘woke’ for Allah